I’m a terrible hoarder. Several cardboard boxes in my loft contain the likes of my first ever payslip as a 16 year old, an old pair of my late grandad’s driving gloves, five decades of football memorabilia and a Fanny Craddock menu for clams cuisine.

These articles are of such little use to anyone that even Only Fools & Horses market trader Del Boy wouldn’t touch them with a barge pole (apart from perhaps the George Formby toothbrush). They are, though, from the fonder times of my life’s canvas and as such I keep them as mementos.

This collection, that would be tat to anyone else , is sadly missing a prized possession acquired on a cold winter West Yorkshire day in 1973.

On the day in question I was stood on the Elland Road Kop watching a Leeds v Everton game with my dad and brother Ian. As I stood chomping through a bag of crisps, out of the corner of my eye I caught sight of a foreign object enter my bag.

On inspection I saw a bloodied tooth, which I assumed was that of Leeds striker Joe Jordan’s as he was stood not far away awaiting medical attention for a trauma injury to his mouth.

Normally souvenirs that arrive in the crowd from players would spark a fight amongst the fans stood behind the goal. However, on this occasion it wasn’t the case at the end of the ground that backs onto Gelderd Road, at the top of the Lowfields Road.

However, on this occasion Joe’s incisor landed, in my bag of salt & vinegar crisps, with such velocity no one else in the crowd were aware I was now the owner of a little trinket of Leeds United history.

Leeds United in front of the Kop in 1974 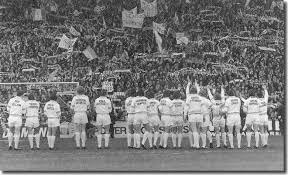 I don’t recall how Jordan lost the tooth, or how part of Everton defender,  Brian Labone’s ear became attached to it. Needless to say it put this 10 year old boy right off his crisps.

After screwing up my half eaten bag in disgust at the contamination of my potato snack, I looked up to see Leeds trainer Les Cocker tending to the Scottish international forwards bloody mouth.

I couldn’t hear what Cocker was saying to the man who towered over his diminutive frame, but I’d like to think it was “Sorry Joe, I can’t find the tooth. Here son, stick that piece of chewing gum in the gap and no one will notice!”

I, of course, knew where his tooth was and my young mind began hatching a plot to covertly contact Jordan with the offer of returning his tooth for a ransom.

What would I ask for though? I didn’t want to be greedy and ask for an exorbitant ransom, mainly because at the age of 10 I didn’t know what exorbitant meant!

I concluded my recompense for the return of the tooth had to be commensurate with the loss of half a bag of Seabrook’s salt & vinegar crisps.

If this backfired though I ran the risk of losing not just one, but all of my dental work at the hands of the hardman Leeds bought from Morton. With this in mind I decided to lower the ransom back to two bags of crisps!

He can easy afford two bags of potato chips (as no one in England calls them… apart from Americans who live here!) I thought to myself. After all, I saw him in my Shoot magazine the other week at home with his wife and they had a Fondue set. Only rich people have fondue sets I told myself.

I handed the rolled up bag to my dad for safe keeping and then, as the Leeds game proceeded as a sort of blur in the background, drafted a ransom note in my head; which I would pen at home later on that evening.

Did you lose anything during today’s game with Everton, apart from your marker for the second goal? …….. An item that is white and bore the remnants of Brian Labone’s ear? ….. No not your shirt, something smaller that rhymes with uncouth……. No not Man City’s Tony Booth you berk!…… YOUR CHUFFING TOOTH!

The reason I ask is that I came into the possession with one of your pearly whites this afternoon while stood on the Kop. How I came upon this is irrelevant; needless to say the tooth is well and, although covered in salt & vinegar flavouring, is as it was when it left your mouth at 3.24pm this afternoon.

If you want to see your front tooth again, leave two bags of Seabrook’s salt & vinegar crisps under the bridge on Lowfields Road at 8pm this evening.

I trust you will not involve the authorities of my request. Failure to adhere to this request will result in the permanent disappearance of your salt & vinegar encrusted incisor.

By the way Joe, you don’t know Brian Labone’s address do you? I want to return the part of his ear I have in my possession (for another two bags of Seabrooks).

With this letter drafted in this young boy’s head, my attention returned to watching the football, in particular Jordan’s scouring of the pitch at the end for his missing tooth.

When we got home, I raced to the sideboard to get some letter paper and a pen in preparation for composing a ransom note, before hunting my dad down in the living room.

“Where’s that half eaten bag of crisps Dad?” I asked my pater who was watching Dr Who on our recently acquired colour TV.

“You what?” my dad responded with one eye on the TV.

“That bag I gave you at the match. The one you put in your inside pocket. Where is it?” I tried to clarify.

“Oh our Ian has eaten them. I thought you’d finished with them so I gave them to him earlier!……. Did you know there was a tooth in there?!” came my pater’s reply.

“What did he do with the tooth?” I queried with a sinking heart.

“He swallowed it by accident! …… He’ll pass it eventually if you need it that much.” My dad assured me. I didn’t want it that much!!

I didn’t respond, I just left the room dejectedly, with my chances of extorting a Leeds player in tatters.

Never mind, at least I still had my George Formby toothbrush!

Joe Jordan – Playing for Scotland minus his incisor 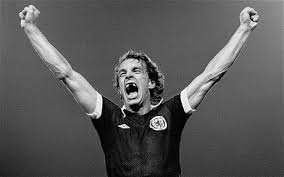