I start this narrative on Karen’s and my third sit in a hospital waiting room this week. To clarify we are in waiting room’s for her appointments with consultants, nursing staff and today with a physio….. We don’t just turn up randomly to get warm and read ‘Peoples Friend’ from June 2009!

Karen is sat next to me twiddling her thumbs. She must be in a relaxed mood as she is rotating the digits in a clockwise direction. If she’s nervous she rotates anti clockwise. 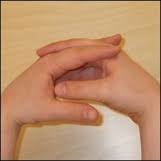 After nearly 28 years of marriage I can tell a lot about my wife’s inner thoughts from her body language.

For example, if she’s happy she pats the top of her chest near her collarbone when she is talking. If she is irritated with me her right eye spins round anti-clockwise simultaneously with a her left rotating in a clockwise motion.

Additionally, if she screams “Will you stop pissing around you chuffing idiot!” that’s a sign our that, at that moment in time, our relationship isn’t as cordial as it should be!

Not that she loses her temper much. You really have to push her buttons to get her to snap. Well to be more accurate, you have to push the TV remote control buttons to change channel when she’s watching Corrie.

She has stopped twiddling her thumbs now and is stroking the back of her left hand with her right thumb. This is a sign that she needs to buy Oxo gravy granules (other gravy granules are available) when we visit the supermarket later. If she strokes her left hand with her right index finger that’s a sign we’ve run out of Oxtail soup (other flavours of soup are available).

On a shopping day, I dread it when she has lots of items to remember, as she has so many movement reminders it looks like she suffers from St Vitus Dance while meandering down the aisles.

Karen has gone into the physio’s now. He seems a kindly soul, although he uses the word spasm a bit much for my liking!

As she walked into the physio’s room, Karen was scratching behind her left ear. So either we need some Viennatta ice cream or the dog’s got flees again!

My wee spouse was referred to a physio after her last GP visit when she said to her doctor “Can you refer me to a physio?” She gets straight to the point does my Mrs!

Stress does terrible things to people. The rationale of an individual under strain is often erratic, leading to bad decision making and subsequent flawed actions. Be this in a working environment, relationship choices or in ex-US President Bill Clinton’s case the waste of a good cigar.

In the case of a friend of mine it destroyed his self confidence to such an extent, despite having many qualities, he deemed himself unemployable and worthless.

Thankfully, even though he still has some of the same issues that predominantly caused these problems, he can now see the wood from the trees……. Meaning that he still fights many challenges but at least he has some fuel for the fire!

The late American writer Gore Vidal is attributed to have said “It is not enough to succeed; one’s friends must also fail.”

I’m not sure if Gore genuinely meant this, or it was a mischievous swipe at what he deemed an ever growing spiteful society.

Unfortunately, from my observations there are many people who subscribe to this maxim. I believe its called schadenfreude. The spiteful ideology of those bankrupt of humanity. 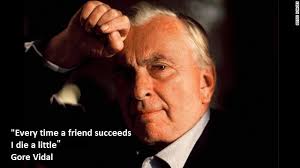 Talking of Gore, I read today that Al Gore, the former US Vice President to Bill Clinton, was a joint Nobel Peace Prize winner (with the Intergovernmental Panel on Climate Change) in 2007.

To clarify this accolade was received for his environmental work not hiding Bill’s cigars from Hillary!