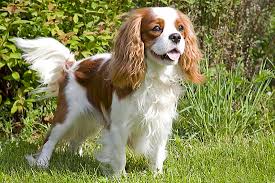 Yesterday evening chez Strachan took on an unaccustomed role of kennels, when wee Sophie the Cavalier King Charles Spaniel was our canine guest.

I’ve never owned a dog before so it was a bit of a learning curve for me. With this in mind, I decided upon a strategy of entertaining our furry chum with the board games of my kids younger days.

It turned out to be a flawed approach, which ended with me scattering board and counters in annoyance at Sophie beating me 2 games to 1 at Connect 4.

She lulled me into a false sense of security by claiming she had never played the game before, but turned out to me more than adept at the board game…… Thank god I didn’t play her for money.

In search of keeping our sad eyed visitor occupied, I then decided to read the lady a story. The days of our book case overflowing with Roald Dahl classics, Dr Seuss’ rhyming tomfoolery or a Disney hardback are long gone, meaning me improvising as best I could.

This resulted in me eloquently relaying a chapter from a book called Eminent Churchillians to my new canine chum.

Unfortunately, Sophie wasn’t overly enamoured about the exploits of Winston Churchill’s compatriots. I maybe misreading the situation, but when she wandered off to look up the Samaritans number (she’s a clever dog) I got the impression all was not well.

As I got towards the end of the chapter on the politics of appeasement pre World War II my canine buddy had had enough and started growling at me.

So it was back to the old drawing board to seek innovative ideas to entertain wee Sophs.

At this point I spent a few minutes rattled my erratic mind attempting to recollect how I occupied my kids in their high maintenance toddler years.

It finally dawned on me the answer was there right in front of my eyes….. My spectacles!….. As toddlers, my kids used to find specs based tomfoolery highly entertaining.

This involved simple tricks like wearing them skew whiff or upside down; letting them wear my gigs or utilising slapstick to trap my nose in my glasses case. As very young kids, Jonny and Rach used to giggle uncontrollably at my pranks.

Unfortunately, my young canine friend was a tougher audience and didn’t crack a smile throughout my whole routine. I got to experience how English comedians were received playing Glasgow music halls in the hey day of variety entertainment, without having to dodge empty whisky bottles.

Sophie stopped short of shouting “Get off you unfunny English b*****d!” but my confidence was shot nevertherless! Could it possibly be that wearing spectacles in a cock eyed fashion wasn’t hilarious after all?!

Dare I ever attempt it again? Should I cancel my application for the TV show Britain’s Got Talent?

Could it be possible that throwing gummy sweets into the air to catch in your mouth (another of the kids favourites) was similarly lame in the humour stakes?

I was racked with self doubt! To console myself I took a swig of wine and threw some candy in the air, catching each one in my mouth. To my surprise this led to the little Cavalier King Charles Spaniel smiling broadly as I nabbed each sweet in my gob, one at a time…… It was a relief to know that I’ve still got it!

What have I learnt after my first evening of dog sitting our furry guest?

Well for one that I’d be more inclined to own a dog than previously. I’m not anti-dog by any stretch. However, I’ve never wanted one enough to act upon the urge to add one to the family. They can be tying but they exhibit more loyalty and are less high maintenance than many humans.

I’m not sure I could have a Cavalier King Charles though as, despite their unquestionable beauty, one look at their sad eyes would result in me constantly acquiescing to their demands.

Yesterday evening also taught me that in future never underestimate a Cavalier King Charles Spaniels ability at Connect 4! …… Oh and that dogs aren’t that interested in 1930’s politics of appeasement!

Perhaps, unbelievably my research unearthed a picture of a dog playing Connect 4! 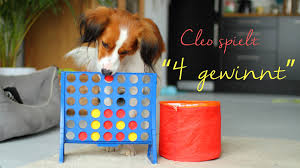