Yesterday evening, I’d another game of football with my lab/retriever buddy Coco; on this occasion, though, our contest played out on the back lawn. The additional space afforded to Cokes compared to the recent indoor game, of which I penned in Match Of The Day, seemingly adding a more competitive edge to the canine’s match tactics.

Hunter an uncompromising childhood hero of mine from the legendary Leeds United team of the 1960s/70s. Sadly, recently passed as a victim of COVID-19….. In fact, Coco took the bite yer legs a little too literally at one juncture, playfully nipping at my shin bone on the rare occasions I succeeded at wrestling the ball from her vice like jaws.

I’ve played football innumerable times over the years, but this is the first occasion. I can recall leaving a pitch with teeth marks on my shins. Thankfully, it wasn’t a proper bite from the powerful jawed hound, merely a mischievous nip.

What did I learn from this rough and tumble masquerading as a game of football? Well firstly, you have to be incredibly fleet of foot to keep the a football from a highly charged dog….. I also took from this episode that next time I’ve a game of footy with my four legged friend I’ll be donning shin pads!….. The dirty so and so!

In my footballing heyday, when I’d quick feet and decent balance, I’d have given Cokes a run for her money. However, in middle-age I’m nowhere near as nimble, consequently, my canine chum (who’s 7 years old today) ran me ragged. It was very much a case dog versus man heading towards dotage.

For her birthday, I gifted Cokey a doggie treat which was supposed to last her for an hour or two. However, displaying similar jaw strength to that utilised on my shinbone during yesterday evening’s football contest, it didn’t last anywhere that long the greedy so and so……. I did intend giving my furry chum the birthday bumps, but the crane company let me down at the last minute.

As I write old Cokey is laid at the bottom of the house stairs, endeavouring to cool down a bit. On making eye contact with the lab/retriever, she grins back smugly, no doubt basking in the glory at running me ragged on the football field…. Well, back garden.

She wouldn’t be gloating if we partook in a cricket game, where I’d fancy my slow left arm deliveries would bamboozle the birthday girl. Sadly, though, my attempts at teaching her to hold a cricket bat have thus far not borne fruit. 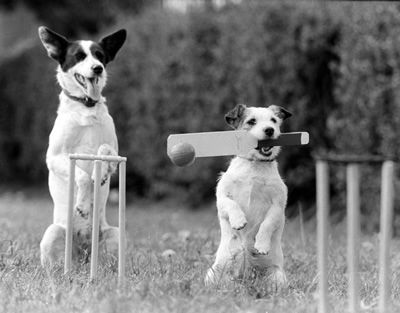 I reckon I’d probably also beat my furry buddy at snooker, darts and table tennis. Three games I was decent at during the my sporting pomp. I also reckon I’ve attained better educational qualifications and am better at driving cars than Coco…..  So you can remove the boastful look from your visage, lady!