Currently awaiting the light bulb moment that’ll cast forth today’s topic, my eyes gravitate to a leaf from an aubretia plant in a nearby garden border. This bract bearing a remarkable profile resemblance of late American comedy actor/writer Groucho Marx.

Witnessing this Marx-a-like frond evoking memories of my fledgling years. An era when Groucho’s fine line in quick-fire and witty repartee, in Marx Brothers movies, stood as a prowess I yearned for my adulthood.

His confident delivery of absurd but highly amusing putdowns, frequently at the expense of characters played with consummate deadpan by Margaret Dumont, never failing to manifest a GJ Strachan belly laugh.

Simple, yet deeply funny quips which still tickle my funny bone in middle age. This chortling manifesting despite witnessing the verbal jousts on innumerable occasions. An example of which a short interaction from Marx Brothers movie Duck Soap:-

Scene – After offering a spread deck of cards to Mrs Teasdale (Dumont), at a banquet in his honour, Rufus T Firefly (Groucho) urges her to “Pick a card!”

After choosing one from the deck, Mrs Teasdale inquires “What do I do with the card?!”

Rufus T Firefly retorts, “You can keep it, I’ve still got 51 others!” 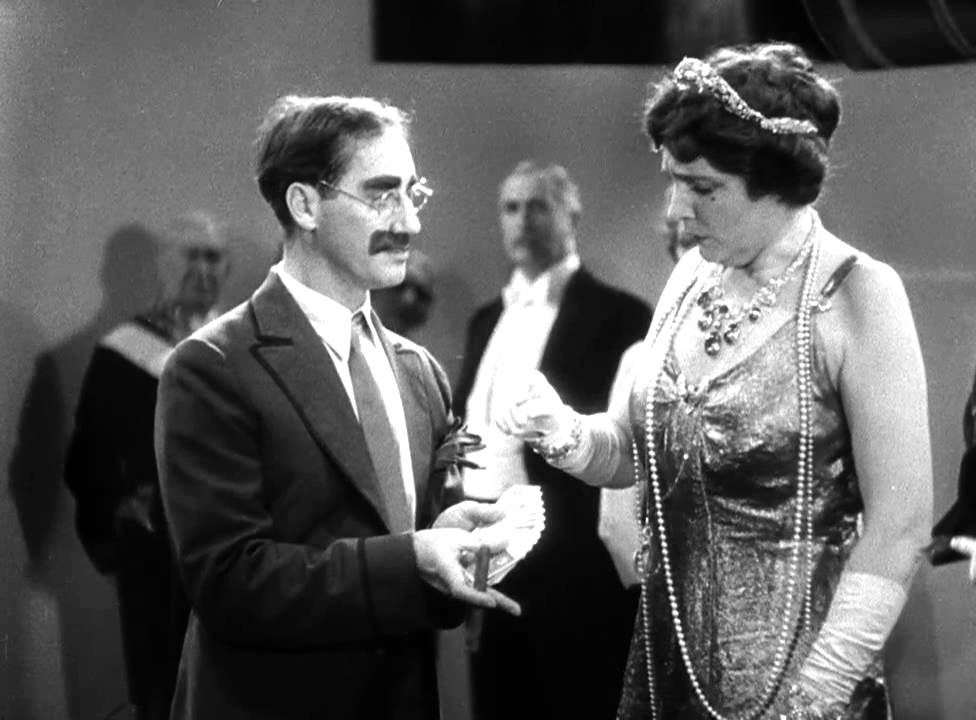 These characters, who are bereft of wit as sharp as Groucho’s unable to respond in kind. Generally resulting in their only verbal recourse being to label him a cowardly buffoon. Accusations he never seemed to dispute, merely stinging him into further facetiousness at their expense. His weapon of choice in these duels courtesy of the lip, not fist.

The epigrammatic one ordinarily prevailing over his rivals spite, snaring the girl; the pair staggering into the sunset to live humour every after. Groucho with trademark stopping gait, face paint and cigar; the latter a more innocent prop than was creatively utilised by Monica Lewinsky’s used decades later.

Groucho’s verbal jousts with male foes were amongst his funniest. This consummate p!ss taker, never allowing a nemesis the last word. Concluding statements always delivered by him; for no other reason than witty wordplay was something where he reigned victorious and he knew it.

An example of which:- Scene – A man after hearing Groucho insult his wife, “That’s my wife, you should be ashamed of yourself!”

Groucho in retort “If that’s your wife, it’s you who should be shamed of yourself!”

Not the most cleverly created jocularity ever written, but a humour style I nevertheless adore. As a kid, if my aural/visual backdrop was that of a Marx Bros movie putdown, or an early Woody Allen film affording similar deprecation, I was in clover.

Allen’s style in early movies was one of playing fast and furious for laughs. Celluloid offerings providing an amalgam of slapstick, neurosis and ridicule, including Take the Money and Run, Bananas, Sleeper along with Love & Death. Three films which many years later are still amongst the funniest movies I’ve ever witnessed.

This celluloid trinity nowhere near as erudite and thought provoking as Allen’s multi Oscar winning work from four time Academy Award winner Annie Hall to current day. But god did it make me laugh as a kid, and to be honest still does!

Footnote – That being said, the following dialogue in Woody Allen’s 1975 comedy movie Love & Death cannot be denied the label of erudite, or indeed hilarious:-

“Sonya: But, if there is no God, then life has no meaning. Why go on living? Why not just commit suicide?

Boris Gruschenko: Well, let’s not get hysterical. I could be wrong. I’d hate to blow my brains out and then read in the paper that they found something.

Sonja: Boris, Let me show you how absurd your position is. Let’s say there is no God, and each man is free to do exactly as he chooses. What prevents you from murdering somebody?

Sonja: Not in a rational scheme of perception.

Sonja: But judgment of any system or a prior relation of phenomena exists in any rational or metaphysical, or at least epistemological contradiction to an abstracted empirical concept such as being or to be, or to occur in the thing itself or of the thing itself.