This morning, during a telephone conversation with her youngest son Ian, my mum felt moved to advise him her capability of coping under this dark COVID-19 landscape was enhanced by the fact she was a wartime baby. Her birthdate, one year into WWII, apparently providing her with a resilience and stoicism of which we 1960’s baby boomers (my brother and I) were largely bereft.

Bizarrely delivered with receiver held to her lug, despite the speakerphone loudly relaying our kid’s telephony fed profferings, Maggie embarked upon a tongue in cheek cliche riddled rant about us kids (we are both in our fifties) not knowing hardship ever in our lives. A verbal tirade including the timeless “You don’t know you’re bleeding born!”

Elaborating further that minus this existential whiff of the workhouse her two middle-aged boys bore resilience issues when confronted by major life imposters. Subsequently, she opined our Ian and me wouldn’t the backbone to deal pragmatically with worldwide pandemics, pestilence, along with worries Leeds United will be deprived promotion by ill-thought out football authority edicts.

Whilst sitting diagonally opposite mater while she chuntered away to our kid, I couldn’t help but smile listening to her groundless accusations. Yours truly humoured by her whimsical diatribe, despite concluding her generalisations were a tad harsh under the circumstances.

After all, I’ve just spent a week undertaking the following chores on her behalf:- Gardening, cleaning the garage, jet blasting the patio, sprucing up rooms and kitchen cupboards, shredding documents; not to mention risking my own health leaving the home to acquire her provisions…… As I inwardly chortled at her ‘words of wisdom’, GJ Strachan concluded that it appears hell hath no fury like a woman who doesn’t understand the concept of speakerphones.

As I could hear the full aural exchange, it became pretty clear our kid, was similarly amused by mater’s generalisations over the metaphorical garden fence. Not bearing his elder brothers penchant of hastily dashing for plateau cynical, Ian (as is his want) politely humoured mum throughout her polemic.

However, being a master of wit and repartee, his elder sibling ‘hilariously’ retorted to their mother’s controversial utterances with a swift and cutting “You can go bollocks, mum!” A suggestion which briefly took the wind out of her oratory sail, before recomposing to enigmatically counter “You would say that, wouldn’t you!!”

I’d not a clue what Maggie’s mystifying response actually related to. I suspected it was an admonishment of sorts, however unlike this vague ticking off (if indeed it was one), ordinarily Mrs S senior’s reprimands leave you in no doubt of her chagrin.

For one thing, her berations always include at least one, or more, of the following colourful words:- arse, bleeding, bloody, tithead and bugger…… None of which were included in the old ladies six word sentence…… With my ingrained lack of inquisitiveness, though, I couldn’t be bothered to seek clarity from the familial matriarch as to the locutions meaning.

After mum ended the conversation with our Ian (I’d already spoken to him), she hung up the call, almost immediately relaying to yours truly “Bloody hell, the volume on that phone was loud!… Could you turn it down on the handset for me, Gary?!”

“There’s nothing wrong with the volume, mum!…. I put it on speakerphone when speaking to our Ian earlier!” I assured her.

“Oh, I’d not noticed it was on speakerphone when you were talking to your brother!” she uttered, looking a tad embarrassed.

“You’re joking aren’t you?…. I’d the receiver on the chair arm and you could hear him as clear as a bell!….. Did you think he was just shouting at me?!” I questioned in bafflement.

“I did wonder why you didn’t have the receiver pressed against your ear!” she confided sheepishly.

“Anyhow, shush, mum!….. I want to listen to this update on how UK support teams are currently coping under COVID-19’s wrath!” I agitatedly pointed out.

“Ok, ok!….. Calm down!….. I tell you what, it’s a good job those NHS lads and lasses haven’t got yours and our Ian’s flawed patience and resilience.” came the old ladies observation, claiming the last word as usual. 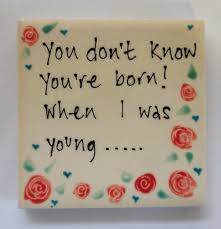 2 kids who've flown the nest, 1 wife whose flown with Jet2. Born at a young age in 1960's Leeds, the author became interested in the literary life when his wife bought him a dog. Having an allergy to dogs, he swapped it for a typewriter. Being unable to train the typewriter to retrieve tennis balls, he reluctantly turned to writing...... Website - www.writesaidfred.org