Clearly, there’s nothing humorous about the COVID-19 virus. A pathogen which’s taken the globe by storm, bringing in its wake death, disruption to the existences of billions, along with displays of both the best and worst in human nature.

However, despite this unprecedented worldwide carnage and full realisation of the severity of coronavirus, currently it’s a whimsical scare-mongering quote from a 1970’s sitcom which’s predominantly wandering my neurological corridors.

These notions probably manifesting from an occasional trait of mine of confronting uncertainty with a lighthearted notion, or two. To be clear, that whimsical strategy is only an occasional behavioural tic of mine. There’s many a day when I’m equally as capable of joining the grumpiest of souls, surfing upon a pessimistic sea.

Anyhow, the soundbite habitually airing in my conscious mind is that of “We’re doomed!…. Doomed I tell ye!” A prophecy originally delivered in a broad Scottish lilt by curmudgeonly Private Fraser, in the BBC TV comedy Dads Army. The glass half-empty Walmington-On-Sea Home Guard having no qualms taking the darkness of his funeral director day job outside of the work environment. 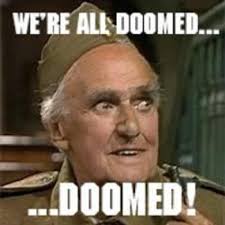 This Victor Meldrew in khaki splendidly portrayed by late Dumfries born actor John Laurie. A character played almost in caricature, he a wild-eyed, s**t stirring, sourpuss who revelled in news of misfortune and adversity. His schadenfreude a negativity sadly oft seen and heard in contemporary times, in my experience from people with very little to feel aggrieved over.

Even though, as an elderly man Fraser would’ve nestled firmly in the vulnerable camp, this global crisis would’ve no doubt sent his opportunity to scare-monger onto an altogether higher orbit. After, of course, he’d packed his funeral parlour cupboards to the rafters with toilet rolls, hand sanitiser and dried pasta.

The dark spirited undertaker would’ve also had the boon of seeing a huge upturn in business. I suppose he’d argue, though, that all those loo rolls and hygiene products “Don’t pay for themselves!”

Laurie’s fictional character would’ve made perfect poster boy for the doom and gloom merchants selfishly panic buying and spreading stark prophecies. Individuals who can’t bear to miss an opportunity to frighten the physically/mentally vulnerable with their oft uninformed scare-mongering.

Sure it is a serious situation which needs sensible precautions, behaviour and adherence. to expert advice. That being said, this pandemic doesn’t give carte blanche for darker souls to scare the s**t out of people with their morbid negativity.

Footnote – As a consequence of panic buying and postponement of all football matches, locating toilet rolls has become the UK’s new national sport. This paucity of loo tissue means scaring the s**t out of people perhaps isn’t a great idea!

Despite misinformation from those with starker agendas, it’s been heartening to witness, through media channels, many positive displays of help by friends and family of the more vulnerable members of society.

Many checking on the physical/mental wherewithal of those in solitude; benevolence that includes offers of obtaining comestibles and, if they’re lucky, the supply of a few sheets of Andrex.

As you’ve probably gathered, when forming a strategy into how I personally cope during these concerning times, I don’t nail my colours to the Private Fraser mast.

Instead, subscribing to his superior officer’s (Corporal Jones) habitual more pragmatic crisis advice of “Don’t panic!…. Don’t panic!“; along with being guided by government and medical experts.