Today sees me in a somewhat laconic mood. Yours truly’s midday return back to Leeds, after a brief but pleasant tarry to the manor of its city cousin York, manifesting within me a melancholic prevailing outlook.

Consequently, Thursday’s verbal interactions have been markedly sparser of content than usual. Those utilised are predominantly laden with cynicism, dolefulness and lugubrious advocacies which, although not uncommon in normal day to day exchanges, are underpinned by a sulky tone of which I’m not proud.

This type of capriciousness, if adopted during my children’s fledgling years, would’ve earned them a severe reprimand.

I’m unsure why this cantankerousness has greeted the return from one thriving Yorkshire city to another. Ordinarily, I’m happy returning back to my home city, birthplace and the domain which bears over 200 years of my Strachan branches genealogical roots.

Today, though, GJ Strachan’s emotions can be best explained by one my mum’s more colourful expressions which she habitually posits about individuals who exhibit low mood, “You’ve well and truly seen your arse, Gary!”

I haven’t literally viewed my posterior at any juncture of this late winters day. Even after stepping out of the shower cubicle, such salacious sightings where veiled by a condensation ridden bathroom mirror. However, the context in which my mother presents the saying would unequivocally apply to the author of this prose.

An example of my prevailing sulkiness has just been exhibited during the viewing of a BBC TV broadcast showing videotape coverage of a summertime food festival. Ordinarily, witnessing these events would see me endeavour to make a positive and/or erudite observation relating to the televisual scene in front of me.

Today, though, with positivity conspicuous by its absence, like a spoiled child, I moodily chirping “Look at those fat b*****ds!” in the direction of my also watching mum. A proffering leading to motherly admonishment surrounding what she deemed as “out of control cursing”.

Also playing out within the food festival daytime show was an interview of an outdoor store holder. This affable enough lady relayed her cuisine was a mixture of North African, South African, East African and West African recipes.  Hearing this woman’s response leading me to cynically observe “Why the hell didn’t she just say her stall sold African food?!…… Surely, she didn’t need to qualify the statement by prefixing the word Africa with north, south, east and west!!

“As Middle African food wasn’t among her culinary fare, perhaps she wished to be more specific about menu content locations !” mater argued unconvincingly.

“Will you stop that bloody swearing!!” mater ranted indignantly.

“Surely, you saying bloody is worse than my utterance of bollocks, mum……. Not to mention, your adage that moody people’ve seen their arse is far cruder than my less brisk alternative of judging ‘they look a bit fed up’…… I’d suggest out of the two of us you’d be the one most liked diagnosed with Tourettes!” I felt moved to point out.

Following the previous paragraph, I was itching to enter the next line of dialogue on the narrative to be a maternal response (at being labelled with Tourettes affliction) of “Your f***ing joking, you stupid t**t!”

Even though I oft enter fictional embellishment to my essays, the writer concluded the above would’ve been too obvious a next line. Additionally, my mum never uses curse words anywhere near as brisk, consequently I’m disinclined to enter that within this prose…… Although, I may’ve just done so by proxy! 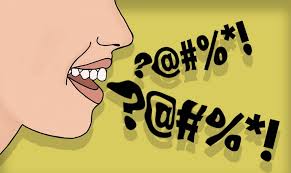