Yesterday in my essay Face Value I wrote of yours truly’s recent reacquaintance with a few vinyl albums of my youth. These original long playing records evoking memories from my fledgling years; melodic antiquities which I’ve habitually revisited of late.

These vivid recollections bequeathed by musical imprints indelibly marked on the tapestry of my life, manifesting visions of warmth, security and the love experienced in childhood.

Yesterday’s musings were those of Phil Collins’ first solo album Face Value, a much loved (and played) gift received on my 18th birthday. The Genesis frontman’s adroit and eclectic mix of refrains one of my favourite listens during this time when wracked with post-puberty angst.

An era where my raging hormones, low self-confidence and lack of existential direction left me unfulfilled and frequently grumpy. Facts making Collins’ ability to achieve yours truly’s positive response to his art somewhat of an accolade by the London-born singer/songwriter.

Reflecting back to that troublesome transition into adulthood, I’d posit that anything which distracted my mind positively away from the frustrations of an irksome puberty must’ve been pretty remarkable.

Face Value was a fully paid up member of that club remarquable…… Although, I need to double check on that as at one point it owed outstanding subscriptions for 1985, not to mention having questions to answer about missing Christmas club money that year! 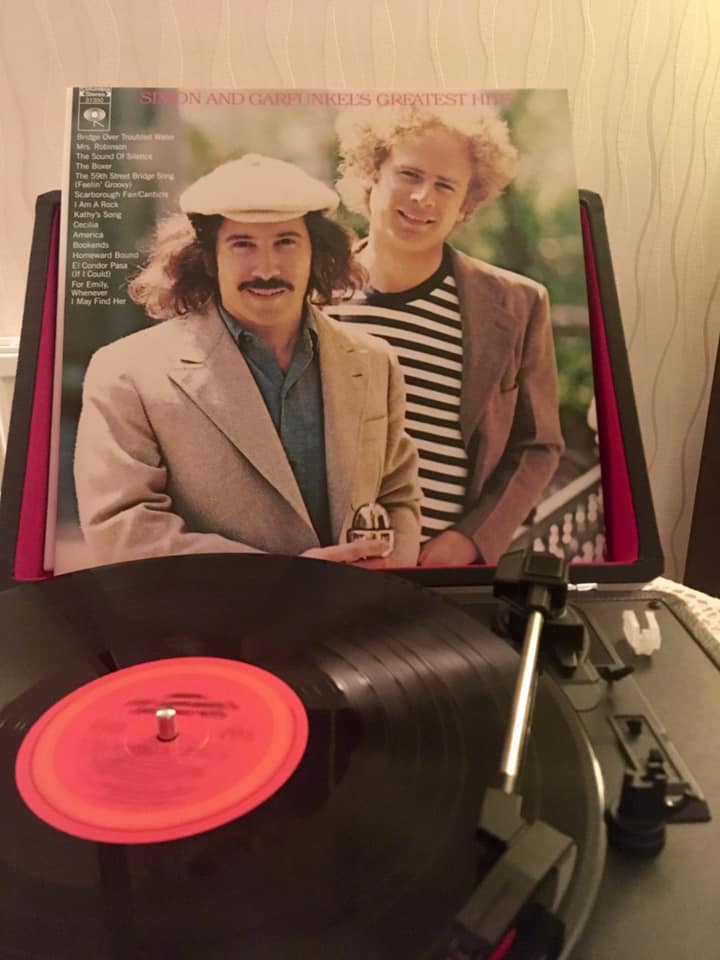 Anyhow, I digress, today I wanted to touch upon the childhood memories consequential from exposure to Simon & Garfunkel’s Greatest Hits album, released in 1972.

Ordinarily, I’d not review a greatest hits compilation with the reverence of the aforementioned classic musical offering. This advocacy not from lack of appreciation towards the splendour of an artists work. Moreover, a consequence of feeling over emphasis on a greatest hits LP via critique can divert valuable time away from concentrating on truly great album tracks not released as singles.

Greatest hits LP’s of course have their place but not, in my opinion, to spend a great deal of time reviewing in prose. After all, they’re ordinarily old songs that’ve already received critique in abundance.

That being said, the fondness of memories manifested by exposure to Simon & Garfunkel’s Greatest Hits album move me to chronicle recollections elicited from deep within GJ Strachan’s psyche on hearing those tracks.

My introduction to Paul Simon’s poetry, accompanied by his and Art Garfunkel’s melodic tones to a predominantly acoustic backdrop, came from a boyhood introduction to this 1972 folk/rock compilation of their hits.

These listenings initially via the 8-track cartridge player in my dad’s mark 3 Ford Cortina; played generally on sojourns from my childhood home in Gateshead to my grandma’s bungalow at Reighton Gap, East Yorkshire.

These Friday evening odysseys always including a stop off. in the North Yorkshire market town of Thirsk for a fish and chip tea – Well, fish cake and chips for my brother and me. From memory the shop, just off the market square, adorning a royal blue glossed door and lower shop window.

Malcolm and Margaret Strachan (our parents) tended to plump for the full fish and chip meal, which the family ate in the aforementioned mark 3 Ford Cortina from the paper wrapping. I’m unsure if my brother Ian and me got a fish cake out of choice, or parental cost saving; but if it was the latter neither of us have dwelt on mum and dad’s early 1970’s thriftiness.

The fish cakes made from a slice of circular fish and slice of potato deep fried in beef dripping batter, a comfort food drenched in vinegar and salt, consumed to the sounds of Paul Simon and Art Garfunkel refrains.

One of which of these folk anthems Scarborough Fair. Coincidentally, Scarborough the nearest town to the east coast resort which was our weekend destination. That’s if we managed to navigate the Sutton Bank 1:4 (25%) slope, never an easy incline to vanquish. Particularly when there was always one misguided holidaymaker who’d stupidly attempt to conquer the slope whilst towing a caravan; a strategy that would cause inevitable traffic disruption.

Through exposure to multiple plays of this 8 track cartridge I become familiar with most of the lyrics on the albums iconic tracks. Additionally, through Paul Simon’s poetry (and questioning my dad) I became aware of greyhound buses, the New Jersey Turnpike, gabardine suits, Pittsburgh, Saginaw, parsley, sage, rosemary and thyme.

My old man was less forthcoming when, while listening to the track ‘The Boxer‘,  I queried what the line “….. Just a come on from the whores on 7th Avenue….” meant.

Instead of his normally thorough answers to my boyhood inquiries, he merely responded “Ask your mum!!”