It’s week on from leaving the clan Strachan gathering in Aberdeenshire. Seven days of existential reflection; sporadic hours where the romantic in me manifested notions of moving to that area of Scotland on a long term basis. That dominions aesthetic beauty and my middle-age desire for peace and tranquility a catalyst for ill thought out ideas of a relocation north.

Common sense, the fact it’d be a struggle to secure sufficiently rewarding employment financially and leaving my family in the north of England, at times overruled by poetic whimsy. My heart ruling my head; manifesting fanciful concepts of a happy ever after existence in the land of Irn Bru

A desire to regularly sample the beauty of my clans homeland leading to haphazard epiphanies. Amongst one of the ideas my opening a Kincardineshire coffee shop***,.

*** – To clarify, when I allude to a Kindcardineshire coffee shop I’m implying managing a cafe in Stonehaven. Not that I’ve designs to lead a group of baristas who’d solely serve coffee whose beans were produced in Mearns….. Although I’d suspect, as the north east of Scotland’s climate wouldn’t lend to the successful mass growth of coffee beans, you probably gathered that anyhow.

One thing for sure is that if I wanted to escape to that area which is around 350 miles from my current home, a great deal more thought will be required into how I can make a serious living if north east Scotland in situ. A haphazard business plan surely leading to me suffering the same economic uncertainty that would’ve caused many of my forefathers to leave Aberdeenshire over generations.

I suppose if pressed, an employment pipe-dream would be to write from a lodge on the banks of Loch Lomond. Pen a ‘proper’ story, as opposed to the minimum of 500 words which I create on a daily basis, populating the once chaste paper in front of me.

My brother Ian oft suggests I write a ‘serious’, melancholic fictional story. Two years my junior, my sibling opines yours truly writes movingly when confronted with creating deeper and darker offerings. A notion I take as a compliment from our kid, and hopefully not a consequence of him thinking my more light-hearted observations are crap!!

Taking onboard our Ian’s observations about my writing, a few weeks ago I made a start on a dark, melancholic tale with a working title of My Shoes Are Too Big. A deeply sad yarn about the struggles of a man whose footwear isn’t fit for purpose. His self-inflicted problem a consequence of mistakenly buying a size fourteen pair of brogues, instead of a size eight. 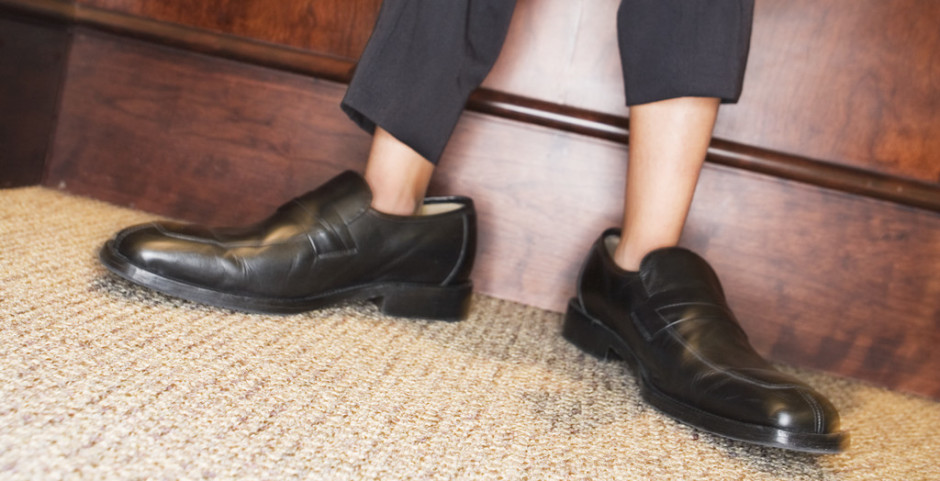 After drafting the first chapter, I emailed it to my brother. As of yet, he hasn’t responded with his opinions on the narrative; although I’d like to think his silence is the result of him being unable to find adequate superlatives to describe my piece of art. This undemonstrative response also maintained when hearing I’d already formulated plans for a sequel, it’s working title My Shoes Are Too Small.

This followup tome a deeply sad yarn about the struggles of the same guy whose footwear isn’t fit for purpose. This time his self-inflicted problem caused when mistakenly buying a size four pair of sneakers, instead of a size eight.

Who knows whether I’ll get to conclude my two tales of differing footwear problems. As it stands, though, I look forward to further wax lyrical about the hardships of living with bunions, viral nail infections and calluses.

Actually, that given me an idea!!…… I might open a chiropodist clinic in Banchory!!