I’m back home in the district of Leeds 15 after spending two days at my mother’s abode in the domain of Wakefield 3. A time that’s been highly productive, during which I’ve undertaken front and back garden maintenance for Mrs S senior; along with a few tasks I’d promised to undertake weeks ago but hadn’t due to one weak excuse or other.

On arrival back at casa Strachan junior I was hoping to sit in the sun with my wife to chat about what the previous two days of separation had brought us. Sadly, shortly after we sat in the sun, the sound of drums being played in our close proximity made noise levels distressing enough to drive us indoors.

That being said, the topic of noise nuisance isn’t something I want to elaborate on. After all, in about 45 minutes it’ll stop and the angst experienced from exposure to this audio intrusion will abate. When the drumming stops, like women must do after experiencing the pain of childbirth, I’ll wipe out the angst suffered until next time.

After my time over at mater’s carrying out horticultural enhancements, I felt moved to pen about the retaining wall my old man built 30 years ago in the home he shared with my mum until his passing in 2017. A stone construction so sturdily assembled its condition remains similar to when he built it in 1989. This the year when my parents and sister moved into what was then a new-build house on the Leeds/Wakefield borders.

My brother Ian and me, who were both in our mid-20’s at the time, had long since flown the nest (our previous home in Low Fell, Gateshead, where we were raised). I lived in Bedfordshire at the time; our kid had just returned to Gateshead after a short spell working in Tunbridge Wells, Kent.

Although in his mid-50’s in 1989 dad, driven by his inspirational landscaping project mission statement of ‘Retaining walls are great’, spent numerous weekends in early 1990 cutting lumps of Yorkshire stone to shape and size to create a barrier to negate against future slippage of soil underpinning his back lawn.

On occasion I got to witness first hand the old man’s meticulous workmanship. His exerting labour undertaken with a smile on face and the occasional cry of “Bloody hell, that hurt!” (after hitting his knuckles with a lump hammer). Watching him at work I couldn’t fail but to feel proud of my pater, especially his determination to complete a back breaking job in his middle-age. A task he undertook on a weekend (his only off days).

Some who didn’t know him may wonder if my late father was the archetypal frugal Yorkshireman, only undertaking the work himself to save a few bob. However, nothing could be further from the truth about this beautiful man who oozed generosity of both benefaction and spirit.

He took on the project because he was a capable, hard working man who knew he’d do a better job than some charlatans he could pay to undertake the task. Individuals who he’d recompense with good money for a sub-standard masonry construction to what he could accomplish.

Over the last few days, seeing how well this retaining wall in the back garden of mater’s abode has weathered makes me ponder whether its durability will many generations from now make it an archaeological legacy……. Like the Leaning Tree of Crossgates, or the Hanging Gardens of Birtley.

By that I wonder if many centuries hence archaeologists will unearth dad’s robust stonework construction. Going on to inform the expectant awaiting press armed with 10,000th generation iPads “It doesn’t bear the historical significance of Hadrian’s Wall in Northumberland, but this 20th century build by an engaging middle-aged Yorkshireman was a damn sight better constructed than the patio a ‘cowboy’ builder built for his son a decade later.”

I’m unsure whether the old man’s wall will ever survive long enough to accomplish that archaeological kudos. I’m pretty sure, though, my poorly constructed patio will be lucky will survive into 2020. 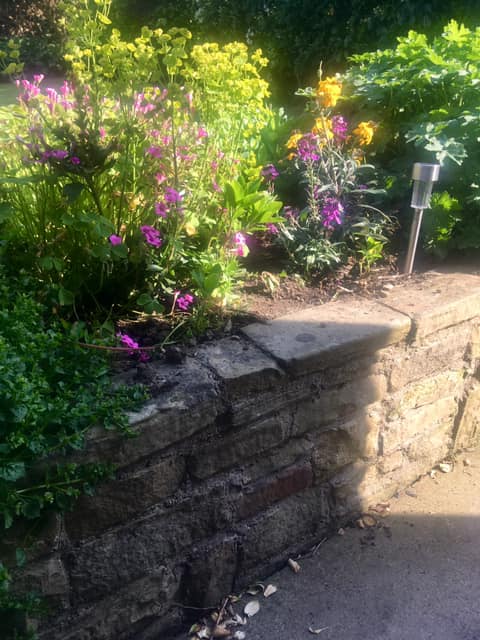