On Sunday I ventured to York with my wife Karen, visiting the home of our son Jonathon. Our eldest offspring inviting us east along the A64 for Mother’s Day luncheon.  A welcome extended to treat his mater to a flavoursome meal, as opposed to the bland fodder he opines ordinarily grace his parent’s kitchen table, regardless of which one of them plays chef.

On arrival at the residence he shares with his fiancée Jenny*** we were surprised to hear the fruit of our loins advise from now on he wants to be addressed as Jonathon, instead of the abbreviated nom de plume of Jonny which he ordinarily receives. His out of character request a consequence of deeming the abbreviated name lacked the formality he now sought in his existence.

The twenty-something lad, enigmatically seeking to introduce a more ordered, less flippant approach to life, which was predominantly indoctrinated during his childhood by yours truly.

*** – Jenny wasn’t at their home on our arrival. She was celebrating Mother’s Day at her mums in Newcastle; or so Jonny,…. errrrr I mean Jonathon, advised Karen and me on our arrival. Looking back retrospectively, though, he did seem very keen to stop us looking in the large under stair cupboard, which the couple ordinarily utilise as a cloakroom……. Perhaps I should’ve also been more vigilant about investigating the scratching noises emanating from behind the cupboard door!!

Jonathon’s culinary treat for his mum, which I gratefully benefitted from by proxy, salmon fillet on a bed of spaghetti, with a mushroom, garlic, onion, white wine and creme fraiche sauce. A recipe he’d purloined from a Jamie Oliver book of Italian cuisine; a tome I mischievously informed Karen was printed on recycled lasagna sheets.

Obviously, she didn’t fall for that nonsense. That being said, though, I’m not enamoured about this streak of mistrust she’s recently acquired. A behavioural trait that’s crept into her persona which casts doubt on everything I tell her, even my more plausible anecdotes. For example, the story about house burglars stealing TV chef Ainsley Harriet’s airing cupboard…… A tale she’d have believed during a less cynical incarnation.

Anyhow, Jonathon’s efforts with the skillet and spatula were top-notch. Although I opine he needs to address his heavy-handed meal preparation methods which left kitchen surfaces cluttered with discarded or clumsily utilised ingredients.

Watching him ply his pastime in the kitchen I concluded my boy bears the creativity of a Michelin star chef, but the grace and sensitivity of RAF Bomber Command pilots. Traits meaning that Jonathon is the only chef I know who works to the background accompaniment of an air raid siren!!

After cooking the recipe Jonathon garnished the creme fraiche/white wine sauce with a dash of herbs, prior to treating the oven cooked salmon to a squeeze of lemon.

The subtlety of pressure he applied to the lemon while liberating its juice akin to watching heavy-handed simpleton Lennie Small inadvertently cuddling a rabbit to death in movie ‘Of Mice And Men’. Consequently, the lemon juice not only coated the three pieces of filleted salmon, but also provided Karen and me with a liberal covering of citrus secretion.

Mercifully, none of the juice went into either of our eyes, meaning at least we could see the meal in front of us, along with collateral damage in the kitchen from our son’s haphazard cooking methods.

Jonathon’s culinary efforts were very impressive. He may not ever win any Michelin stars for his cuisine, however I’d proffer he’s definitely got the capability to acquire four Michelin tyres, if necessary. 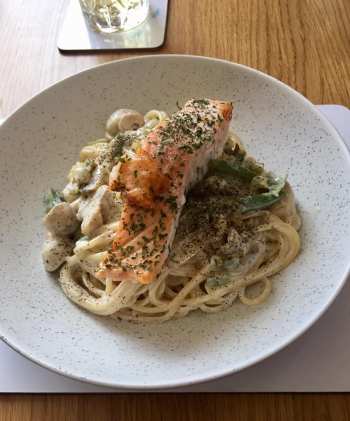 With autumn around the corner, over the past week, I’ve been stocking up on some warmer threads. I make no claim to be a dedicated follower of fashion, however, despite […]