As I write, outside the unforgiving spring bluster which has blighted Blighty for a few days continues unabated. Buffeting the budding deciduous tress, which in summer mask my rear window view of Colton Retail Park’s side brickwork, roof tiles and car park. Rather randomly, the back and forth swaying of the trees brings to mind the Oops Upside You Head rowing dance oft seen during at 1980’s discos.

The Gap Bands song, with it 18-rated lyrics, never failing to pack end of evening dance floors with individuals engaging in a quirky choreography. Moves I’ve never witnessed being mirrored to any other toe-tapper before or since. This the dance that inspired Steve Redgrave’s five Olympic goals. 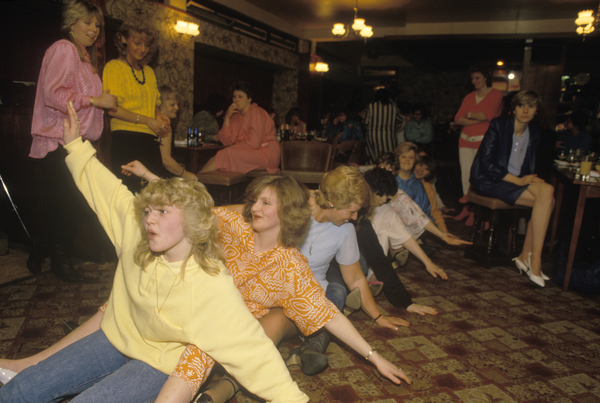 At that time, as a young self-conscious lad with minimal confidence it was rare I’d get on the floor to any song. Let alone a dance where you’re sat in a pool of beer for four minutes avoiding the flailing arms of a drunk bloke from Windy Nook, or the out of control elbows of an equally inebriated lass from Deckham.

This lack of confidence doing little to enhance the likelihood of me approaching a girl to ask for a dance, or at the very least to see if she’d like to buy me a pint! In hindsight, the fact I wore trousers with a collar and epaulets probably also hindered my 1980’s chances of attracting a suitor.

Not that my buddies and me went to many drinking establishments which provided entertainment by dance floor. From memory, there were the occasional visits to The Ship (Tuxedo Princess), and a nightclub opposite Robinsons on the Bigg Market, whose name currently alludes me. Now and again on a Sunday we’d also trek south west from Low Fell to Stanley to frequent The Hilltop’s disco night.

There were also occasional ventures to Tuxedo Junction with its iconic red phones on each table; an innovative idea allowing patrons alternative means of engaging with a potential dance partner. I can only remember using this method of approach once; although the call mysteriously got re-routed to the Samaritans. As it was the Aberdeen branch I’d reached I was just relieved I didn’t have to pay for the call.

I had my stag do in Julie’s nightclub on Newcastle quayside, which I recall as a strange choice of venue; after all, it was somewhere we’d ordinarily never frequent. I can only conclude that it was the only place that would let us in on that evening. I don’t know for sure, though, as the several whiskies I was plied with in Julie’s that evening have rendered bereft any other memories from the night.

Not a particularly nice club in those days, I’d imagine if you did the Oops Upside Your Head dance in Julie’s there’d have been a good chance you’d have got firmly stuck to the dance floor. Requiring a crow bar or the combined strength of a tug of war team to reattain your liberty.

Apart from the rare visit to Newcastle/Gateshead nightclubs the only other times my mates and I socialised where dancing took place was at parties/events like 18th or 21st birthdays, weddings etc. As I alluded to earlier, though, there were very few instances of me taking the floor. If I did, it’d generally turn out a disastrous affair where my anecdotes about new developments in piles medication and how potted meat got its name rarely secured me a second dance.

I know it’s a cliche oft spouted by my generation, but I’d have loved the confidence and knowledge at that age that I currently possess. I’m sure I’d have been a lot more successful with lasses by quoting the lines of Shakespeare, the philosophy of Nietzsche and the true meaning behind the tales of Mary, Mungo and Midge……. Or maybe not!

Perhaps, though, my best bet to improve my fortune in the courting stakes would’ve been merely to stop wearing trousers with a collar!!

Anyhow, enough of the words….. Here for all you finger snappers and toe tappers….. Altogether now……