Skip to content
By Gary StrachanJanuary 26, 2019Blogs fiction humour parody reviewLeave a Comment on The Slowest Milk Cart In The East

For the last few hours I’ve been watching Fiddler on the Roof. To clarify, that’s the 1971 movie adaptation of the award-winning Broadway musical, not that I’ve just witnessed Rolf Harris making a rooftop prison protest.

An epic movie of just over three hours duration, the production was the winner of three Academy Awards (Best Music, Scoring Adaptation and Original Song Score), The film also received nominations in several other categories, including Topol (or Topsoil as an acquaintance of mine once called him) for Best Actor.

It’s a few years since I’d viewed this classic celluloid offering, a blockbusting amalgam of good songs, humour and profound melancholy. Undoubtedly the most famous tune from the tale of a Jewish family’s struggles in 1905 pre-revolutionary Russia was the father Teyve (portrayed by Topsoil… err I mean Topol) singing ‘If I Were A Rich Man’.

It’s a refrain where Teyve pleas with god for an escape from poverty as a poor milkman***, whose job’s made ever harder when his donkey goes lame. During the lament the head of the family confides in the Almighty that if he were a rich man that all day long he’d “…biddy, biddy, bum..”

*** – When I say poor milkman I’m referring to the fact he was short of cash. Not that he wasn’t very adept at delivering milk.

I’ve absolutely no idea what Teyve was referring to with the act of biddy, biddy, bum. However, if he wasn’t asking god for a new donkey, cleaner milk urns and a less rickety cart he’ll have missed a trick. 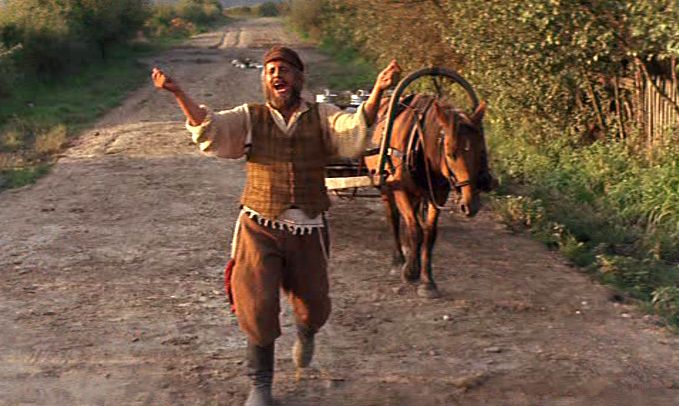 One thread that runs throughout the movie the family head’s insistence his family adhered to the traditions of their faith – Edicts that had stood for generations. Some were complied with, however the three eldest of five daughters were less enamoured about their husbands being chosen for them by a Matchmaker****.

Rebelling against their father in the ever changing world they eventually badger him into giving his blessing to marry partners of their choice. None of their suitors were rich, however it’s probably for the best they weren’t otherwise Teyve would have no doubt wasted their wealth on biddy, biddy, bum!

“This is all very informative, Gary, but why are you reviewing a movie that’s forty seven years old?”, I hear you cry.

A good question to which I have no real answer. Other than I’m writing a second blog of the day in an attempt to distract myself from goings on in the Leeds United (LUFC) game, which I know if I listen to may set back progress of currently recuperating ticker!

I can’t (or choose not to) have a drink tonight to either celebrate a LUFC or drown my sorrows if they’re defeated. I’m not sure why I’m that het up about the Leeds result, after all my love of football and me parted quite a while back. It was a particularly acrimonious split where my love of football got the house, kids and CD’s……. All I ended up with was heart problems and a flaming Fiddler on the Roof DVD.