As a child growing up in the 1970’s, my aspirations for adulthood were to mirror my then hero Allan Clarke. A fledgling dream to lead Leeds United’s (LUFC) strike force to domestic and European honours, like Clarke, clad in Puma football boots and gleaming number 8 sock tags.

Unfortunately, they were existential desires that were never fulfilled. As the aging process took it’s natural course, I learned you need more than a pair of Puma boots and blue sock tags, adorning a white number 8, to become a top professional footballer.

Even the fact I could mimic Clarke’s arm(s) in the air goal celebration with forensic accuracy didn’t seem to raise my profile amongst northern footballing scouts. Consequently, the call from Elland Road (home of Leeds United) never materialised. Resulting in me drifting into a career mimicking crowd chants at Subbuteo table football tournaments.

On the weeks there weren’t Subbuteo competitions I’d the safety net of my chaffinch impersonations to put food on the table. My wife Karen wasn’t overly enamoured with our diet of berries and worms, however when times are tough you make do.

My family’s personal hardships coincided with Leeds United’s relegation in 1981/82, ironically under the stewardship of Allan Clarke. That being said, I don’t think Clarkey not taking a punt on signing this skinny 18 year old lad had any bearing on this sad event in the club’s history.

My boyhood idol instead opting for another skinny not fit for purpose striker for the role, in the shape of Peter Barnes. As a young man I bore no bitterness at my childhood aspirations remaining unfulfilled. After all, I was never close to playing at a decent level. 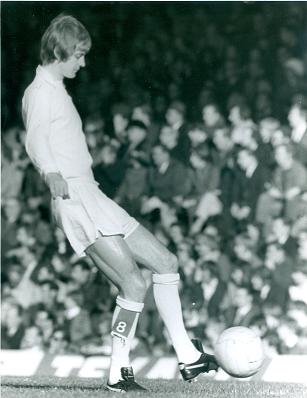 Later I ditched the chaffinch impersonations for a better paid job in the field of computer operations. A career I never enjoyed, particularly when they banned me from adorning Puma boots and sock tags at work. On the plus side, though, my new role put better food on the table than sourced by avian mimicry.

As fate would have it, Leeds United’s return to successful times in the late 1980’s were with a G Strachan as team captain. Sadly for me it wasn’t Gary Strachan, moreover the diminutive Scotsman Gordon Strachan. A wee fella, fuelled by bananas and boundless enthusiasm, who led LUFC to promotion in 1989/90, along with achieving the accolade of English champions in 1991/92.

My namesake (well it would be if my Christian name was Gordon not Gary) showing me that football success is a consequence of hard graft, ability and bananas, not misguided belief in the mystical powers of Puma boots and sock tags……. I wasn’t overly disheartened or intimidated by this, though, as apparently Gordon’s chaffinch impersonations are dreadful.

In middle age, I’m too old, and remain not good enough at the game, for my boyhood aspirations to ever be fulfilled. Now my aspirations are to one day receive plaudits for a creative project of some sort.

Sitting here now putting text to Word document in my Puma football boots and number 8 sock tags, I firmly believe I have the wherewithal to achieve these aspirations. If for any reason this strategy proves unsuccessful, I’ll go with the hard work and bananas plan B.