People watching and waiting for my Americano coffee to reduce to a temperature that won’t result in third degree tongue burns, I mull over my existential lot. While pondering, a young man and his partner have just taken residence on the adjacent table in Starbucks coffee house.

“A hockey stick is a hockey stick…… She won’t know the difference.” came the indifferent response from her seemingly cynical beau.

“You’re joking aren’t you?!…… Ice hockey bats are twice as long……. She’ll be furious at your lack of attention to detail with regards the acquisition of sporting equipment.” countered his better half.

“Will it make a bloody difference, love?……. After all, she doesn’t even play hockey of any format!…… God only knows why she put field hockey sticks on her wedding gift list….. We should’ve just got her a toaster.” the guy chuntered in return.

“A toaster isn’t on the gift list!…… She and Greg (I’m assuming hubby-to-be) already have one, so there was no point in asking for another.” she argued effectively.

“Ok then a liquidiser!” he muttered back.

“They’ve got one of those as well!” the young lady informed her beau in return.

“Ok, what appliances haven’t they got?” the ice hockey stick holder irritably queried.

“Field hockey sticks aren’t appliances!” the bloke chirped back, his voice getting ever louder and mood more irritable.

“Neither are ice hockey sticks, but you had no problem buying her those!” the girl pointed out – By now appearing to enjoy antagonising her despairing partner.

“I did have a problem with buying hockey sticks for either format, but wanted to be accommodating to your sister’s wishes!….. Personally, I deemed it an absolutely chuffing ludicrous wedding gift! ” Terence (who I decided to name the guy) exclaimed.

“Well you weren’t that accommodating to her wishes. You got her ice hockey sticks when her wedding present list specifically requested field hockey sticks.” Joyce (the moniker I gave the lass) continued to antagonise.

“It was the nearest to her request I could find in the time scale given.” Terence chuntered back tersely.

“I don’t know. I’ve never undertaken marketing strategies and sales projections for either stick!……. All I know is I couldn’t find a store with field hockey sticks in stock” snapped back the guy, now red-faced with stress at the whole ridiculous situation.

“Where did you look?” Joyce continued – Appearing to enjoy how much this was winding up her partner; apparently not wanting to end his ordeal by whimsy.

“No wonder you couldn’t get one then!….. He’s always running out of field hockey sticks…… You should have tried Bernard’s Field Hockey Pleasuredome, you berk. He has a far more efficient product re-ordering strategy!” the lady continued, her grin that of a sheer mischief

At this point Terence turned to me sitting on the adjacent table, before angrily spouting “Look mate, will you stop typing down my girlfriend’s and my conversation, you chuffing nosey b*****d!…….. Oh and can you change my moniker from Terence, my names Troutbeck!!” 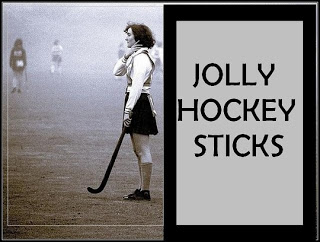 One Reply to “Jolly Hockey Sticks”