My capricious nature often takes me on a journey of fickiality……Incidentally, I know there is no such word as the made up ‘f’ word above, but I like it so it stays.

During this time my mind races with creative thoughts which on occasion can be inspired humourous observations. However, they can just as easily amount to foolhardy ideas that could lead to questions of my sanity.

For example, my use of the word fickiality above, despite there being no such word, just to set up the remainder of the first paragraph narrative. Is that clever or just plain self indulgent, silly and misguided?

Will my flagrant and deliberate misuse of the English language lead to the involvement of the literature police? Will I receive trolling messages on social media from the Cleckheaton Lexicon Society? …….. And more importantly why is my watch that is powered by arm movements, which I’ve just got back from a teenage nephew, showing the date as 31st October 2025?

I don’t know the answers to those questions, although I can take an educated guess about the last one!

One thing I do know is that it isn’t the 31st October 2025. I’m pretty sure I haven’t woke this morning after a nine year sleep. I didn’t even have nine hours slumber, as I woke at least three times due to this attention seeking brain with another questionable idea!

I also know that, despite my appreciating every single hit of the 9,000 on my website and a desire for many more, my creativity good or bad is part of my coping mechanism. With that in mind I intend to continue with it regardless.

No one person who has created anything, be that a painting, a sculptor, a piece of prowse or an Johnny Bravo tattoo will be liked by everyone. Even genius’, who have led the field in their chosen art over the century’s, will not have a piece of work that every person who saw or heard it would fully appreciate…….. Apart from maybe the guy who did the Johnny Bravo tattoo, which is outstandingly good!

So I shall plod on sharing the anecdotes of my neurological corridors of uncertainty (as I dubbed them yesterday). Hopefully, the 9000 hits on my blogging site garystrachan63.com (or writesaidfred.org ), in just over a year, and numerous positive comments from readers are a testament to the fact some of them are hitting the right spot.

If it doesn’t, although I’m open to feedback, I can’t be waylaid in a quest to build the foundations of an entertaining website.

I’ve wasted too much of my life hiding these ideas under a bushel. This should not be confused as concealment under diminutive BBC sports broadcaster Mike Bushell….. I tried once but found you couldn’t hide much under the wee Yorkshireman!

Anyway, hopefully, you’ll appreciate the integrity, beauty and spectrumism of this piece of art even if your not keen on my work! 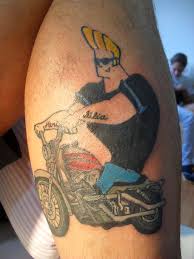 I know there is no such word as spectrumism but its my blog so, like fickiality, it stays.

Right me and my capricious mind, with its inherent fickiality, are off to get ready to assist my old man with his garden. I have to ensure I’m wearing my best gardening gear when attending to my pater’s flora and fauna.

I can’t be bothered to shave, though, so will still have to endure a few hours of my mum labelling me a “scruffy bleeder!”

To close I just wanted to highlight it was National Nurses Day recently. In the last five years, I’ve been in their company on numerous occasions, during Karen’s fight, I’ve nothing but admiration for these underpaid individuals. People, I assume, who put up with all the pressure, abuse and ingratitude as it’s their vocation to care for the sick.

They, along with the other medical staff, underpin the much (unfairly in my opinion) maligned NHS. They don’t earn what the people sat in the offices working out unachievable patient Service Level Agreements, or others ensuring their bonus dependant objective boxes are ticked. However, unlike the box tickers they are irreplaceable.