After yesterday’s birthday celebrations, it was back done to earth with a bang this morning with another hospital visit for Karen’s monthly treatment.

It was good to see my son Jonny yesterday, after he ventured over from York to witness his pater hurtle ever faster into middle age.

It’s pleasing to see what a fine lad he’s grown into in adulthood. He seems to have a sensible and amiable approach to whatever he undertakes. 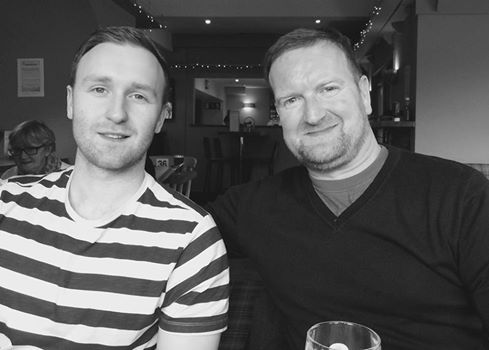 Yesterday, he told his mum and I over lunch that, as a stepping stone to getting his foot on the property ladder, he intends to open a bank product called a ‘Home Buyers ISA’.

This product secures a Government payment once when a certain saving target is met by the account holder.

Karen and I were keen to assist our son so told him we’ll help him out with this product designed to aid him mount the property ladder…….. We’re not giving him any money, but have told him he can use our laptop to apply online for it if needs be!

My birthday was a relatively quiet affair spent with my family. One thing that struck me yesterday (apart from Karen) was how birthday presents differ once you get to my age.

I used to receive jeans, a cd, wine and a jumper I never wore from Marksy’s……… Yesterday I got a catering size tin of cocoa, along with a 6ft bamboo cane for Karen to prod me with when I nod off in the afternoon during Judge Rinder!

I have to say one of best gifts I received yesterday was the laugh a family member gave me when, over coffee, they told my son –

“Jonny did you realise that you can hire toupes at Leeds Fest this year?”

I’m assuming they meant tepees and that it’s not a new marketing strategy to attract more bald people to the music festival…. But you never know!

I laughed nearly as much as I did the previous day when watching a drama based on the life of the late comedian Tommy Cooper.

I’d not seen any of his work for years and had forgotten how funny he was, in particular his ability to raise a laugh from even the lamest joke. Examples of which were:-

Doctor, I can’t pronounce my F’s, T’s and H’s. “Well you can’t say fairer than that then”.

My wife phoned me just before the show, and she said, “I’ve got water in the carburettor.” I said, “where’s the car?” she said, “in the river.”

I went to the doctors. He said “What appears to be the problem?” I said “I keep having the same dream, night after night, beautiful girls rushing towards me and I keep pushing them away” He said “How can I help?” I said “Break my arms!”

I can’t imagine jokes like that getting the laughs they did if delivered by someone other than the hilarious Caerphilly born comic/magician.

Perversely, even his death raised laughter when he collapsed and died halfway through his act live on TV.

The audience gave “uproarious” laughter as he fell, gasping for air as he suffered his heart attack and subsequently passed away, thinking it was all part of the act. It of course wasn’t!……. But if it was I don’t imagine anyone has ever gone that far as that to raise a laugh!

One of the funniest stories I’ve heard surrounding Cooper was when he met Queen Elizabeth II following a Royal Command Performance. Whilst stood in a line with the rest of the shows performers Tommy Cooper had the following verbal joust with Her Majesty:-

“Do you mind if I ask you a personal question?” Tommy asked.

“Well not really” said the Queen.’ 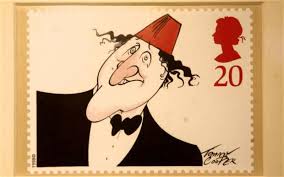