I’ve spent the last few hours taking my mum for her weekly comestible shop at a south Leeds supermarket. During today’s oft challenging sojourn, taking the opportunity to collect a phone whose tariff I’d upgraded to yesterday evening, along with investing in new and more en vogue gym kit.

The latter I felt required imperatively to address the fact during yesterday’s Fitness Circuits class appearing as though I’d acquired my exercise attire from the Garforth Leisure Centre’s lost property box. A lack of sartorial elegance which I’m surprised didn’t lead to fellow class members mistaking me for a vagabond, consequently bequeathing me 50p for a cup of tea.

Footnote – The journal of yesterday’s gym work is featured in greater detail in my essay The Wheels Are Rolling.

Even though I own two other pairs of training shoes (or sneakers as our American cousins label them) those particular items of footwear were expensive; purchased to don as casual attire with jeans or chinos whilst out and about town. Consequently, I’m reticent to adorn them during a sweaty jog on a treadmill, or render them even more perspiration ridden while rowing machine in situ.

As a result I bought a far cheaper brand of training shoe than my smarter pumps. This strategy of prudence ordinarily frowned upon by one particular family member who deems such actions as false economy. An advocacy they back with the rather blunt observation of “You buy s**t, you buy twice!”

Admittedly, a verbal proffering I ordinarily subscribe to; however, but on this occasion I deemed the £27.99 invested in the cheaper brand trainers to be more than enough. After all, I’m not inclined to spend ostentatiously on designer sneakers to be worn in gym sessions/classes. In this instance, a profligacy I was unwilling to indulge in. 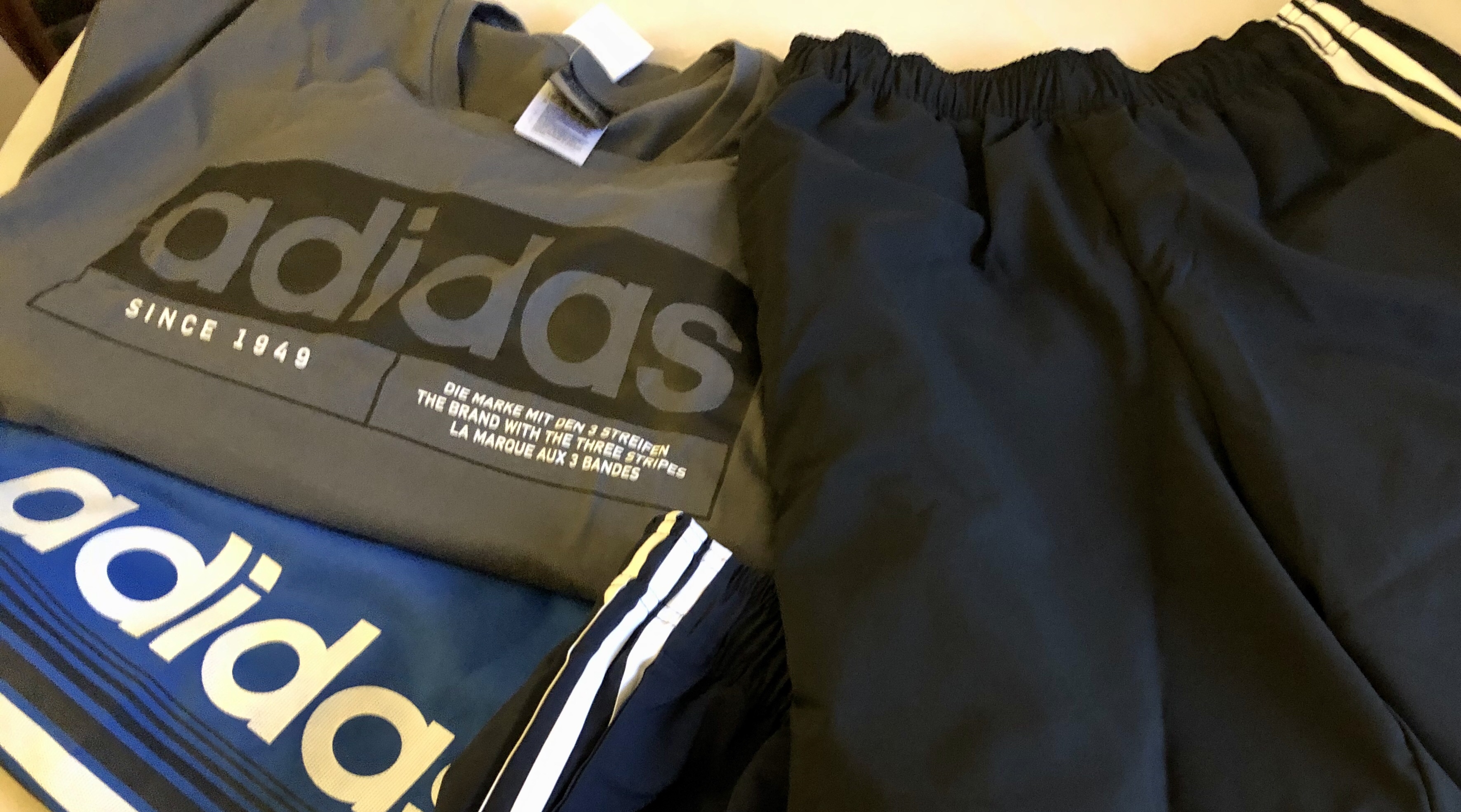 Within the hallowed malls and aisles of this south Leeds retail park, yours truly also purchased a couple of sports t-shirts and shorts. The previously shabby t-shirt worn yesterday while in fitness studio, which in conjunction with my beard gave me the appearance of vagrant, now in a charity clothes bag.

My tracksuit bottoms, which appeared to have lost 6 inches from their leg length after they were last laundered, joining them…… Shortly after receipt, the charity in question may return them unwanted with ‘Return to sender!’ attached. But hey, it’s the thought that counts…… Doesn’t it?!

To be honest, I may myself have to return the gym attire purchased earlier. A consequence of not yet trying them for size. In hindsight, my recent fluctuation in t-shirt sizes between ‘XL’ and ‘L’ meaning it’d probably been sagacious of GJ Strachan to embark on a pre-purchase fitting.

Since my waist band measurements haven’t changed since my late 30’s, I’m confident the ‘L’ sized shorts will fit as designed. Even if they do turn out slightly on the oversized side when I don them, they’ve a tie waist and are worn baggy so should achieve a plateau of gym kit sartorial elegance I seek.

Anyhow, I’m going to conclude the narrative at this juncture to setup my new mobile phone device. It’s not the latest generation iPhone I’ve upgraded to, however it’ll provide me with a larger display screen, greater internal storage and processing speed.

This’ll likely be my last blog for a few days as I intend to commence rewriting a draft book I wrote in 2010, which I apathetically left to gather dust on memory sticks and iCloud….. See Resolution Procrastination.

If you wish to read any of my essays during this hiatus there are 1,712 published on my blogging website writesaidfred.org …….. Thanks for your continued support; hopefully I’ll be back in the blogging saddle at the weekend.