On commencement of this sentence my wife Karen has kindly wandered from the kitchen bearing gifts of a mug of tea and a piece of velvet cake, which she carries with the finesse of a Leeds Rhinos prop forward.

Beneath boiling water infused steam, the sky blue mug advocates I should ‘Keep Calm and Drink Tea‘. I appreciate the azure blue beakers well-meaning advice, but in my bloated post-dinner state I can’t help feeling ‘Keep Slim and Stop Eating So Much Bloody Tea’ would’ve be a more apt mug recommendation. 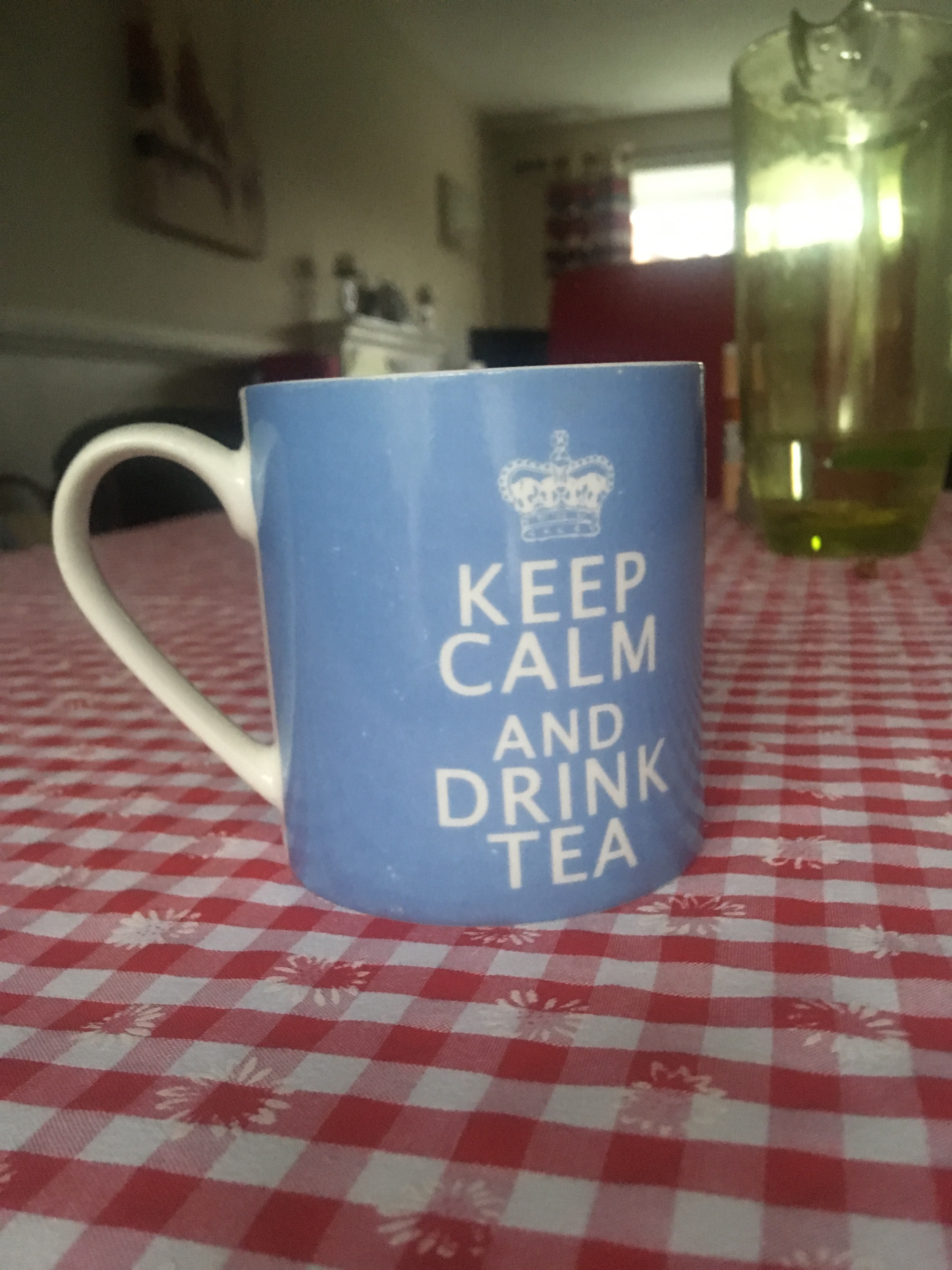 To allow me greater freedom to type these literary meanderings, I’ve perched this piece of crockery upon the Mediterranean style cloth adorning the dining table. It’s location just a short reach from where my posterior is inelegantly planted.

The azure coloured cylinder standing in solitude – It’s pottery cousins, who’d laboured on the earlier evening meal shift, receiving their daily ‘shower’ while dishwasher in situ….. Although eyewitnesses of a more sensitive disposition may beg to differ, perhaps opining the crockery is being sadistically water-boarded not showered!

The latter, though, a conclusion I could never concur with – After all, crockery doesn’t have feelings. An argument I’d support with the observation that following my cardiac arrest in January not one of them sent me a ‘Get Well Soon’ card…… They’re heartless I tell you. Heartless!

Glimpsing again at the vessel offering the advice ‘Keep Calm and Drink Tea‘, I notice the once rising steam has now disappated. My quick swig of the brew’s remnants confirming the hot beverage has indeed enjoyed warmer times.

One of them about ten minutes ago when it burnt my tongue – An incident resulting in me being afflicted by a fleeting speech impediment. My scalded mouth causing me to briefly lose the capacity to say the word juxtaposition…… Even more intriguingly, this affliction temporarily extended to a baffling inability to type the word in paragraph one!!

I’m pleased to announce the crockery washing/water-boarding (delete where applicable) has now abated. The slurping sound of the used water being dispelled from the appliance at the end of its cycle bringing to mind the noise my wife emitted last week while drinking a slurpy. This cacophonous beverage consumption part of the cinema experience I ‘enjoyed’ with my Geordie missus, where we viewed celluloid biopic Rocketman at the local Odeon movie theatre.

This new cinema, which opened it’s doors around eight weeks ago, offering the most comfortable reclining theatre seats I ever had the good fortune to patronise. These pews inducing a feeling of such luxuriant comfort that if my thirsty spouse hadn’t been making so much bloody noise slurping I’d have probably nodded off.

Not that I wanted to slumber at the time. Rocketman is a not to be missed account of English singer/songwriter Elton John’s early rise in the music industry. To borrow from Bernie Taupin’s lyrics, a time when the artist formerly know as Reggie Dwight spent a great deal of time “…burning up his fuse up there alone.”

Elton’s lyricist also vaunting that Mars wasn’t the place to raise your kids; opining that in fact it’s cold as hell. And there’s no one there to raise them if you did!…… Although well-meaning locutions, surely they’re notions of such an obvious nature there wasn’t a  requirement to proffer them…… Don’t you agree, Bernie?!

Seriously, though, the combined songwriting genius of Taupin and Elephant John (as late comedian Eric Morecambe once mischievously dubbed him) will in my opinion ensure Rocketman’s musical score will, at the very least, prevail in the Best Music In A Film Award category at the Pudsey Film Festival. This a little known event sponsored by Calverley butcher Ayrton Chuff who presents each category winner with a miniature brass skillet.

I’ve no idea if Elephant and Bernie will be able to attend the event, which takes place in the vaults of the Calverley Building Society (if Ayrton can remember the it’s security code). Hopefully, though, if not, they can be presented with their quirky award by video link. The miniature brass skillet subsequently taking pride of place on Elephant and his husband David Furniture-Polish’s fireplace.

Anyhow, enough of this nonsense. It’s my wife’s birthday so need to bring this silliness to a conclusion so I can treat her to lunch…… Happy Birthday Karen Strachan!