Skip to content
By Gary StrachanJune 27, 2018Blogs fiction humour Postcards fromLeave a Comment on What Goes On In Film Noir Club….

Via the miracle of social media, yesterday evening I received a ‘Dear Editor…..’ correspondence from a mate purporting to be ‘Disgruntled from Shrewsbury’. During this eloquently worded critique they felt moved to highlight key omissions in yesterday’s narrative England Win, Lake & Calmer.

England Win, Lake & Calmer being a whimsical monologue giving a brief insight into our weekend trip to the Lake District along with six other friends.

For the purposes of anonymity I’ll refer to ‘Disgruntled of Shrewsbury’ as Jeff Patterson, 411 Broadstair Flats, Opposite Subway, Near Betfred, Shrewsbury, Near Wales.

Jeff is the brains of the motley crew who resided in Ambleside’s Arthouse Cottage last weekend. I’d like to say that’s a compliment to the former Gateshead lad, however when you look at the intellectual capacity of the rest of us it probably isn’t.

Aware of his greater cerebral capacity, Jeff enjoys nothing more than strutting around the group dressed in a ermine cloak and crown while patronising his buddies. Putdowns such as “Blimey, did you not know that!!” and “I bet you don’t know it’s currently 1700 hours in the Seychelles!…. You thick get!”

Don’t get me wrong he’s a nice guy who I bear no ill will, although I must admit I underwent a tinge of envy when one of the lads told me Jeff can break wind in three different languages. A trick, despite years of practise, I’ve never been able to accomplish.

No one knows the trinity of languages within the Low Fell lad’s flatulence repertoire, or indeed witnessed this unlikely pastime; however, I’ve nothing but admiration for his achievement.

It came as no surprise when Mr Patterson comfortably triumphed during the group’s participation in the board game ‘Who Wants To Be A Millionaire’. His Hawkingesque intellect earning him the grand sum of £128,000. Victory born with articulate responses such as ‘Yellow’, ‘France’, ‘Darwin’, ‘Judge Judy’, ‘Judge Rinder’, ‘Judge Dredd’ (there seemed to be lots of answers with Judge as a prefix), and ‘Moth Gestation’.

Obviously that £128,000 wasn’t forthcoming from his victory, but it mattered not to Jeffrey as he’d won something far more fulfilling than money – Bragging rights. In particular, he’d been gifted another 12 months where he could don his ‘Gary Strachan Is A Thick S***e’ t-shirt…… Although even if he lost he’d probably still worn it!

Not to mention carte blanche to continue walking around Shrewsbury High Street with a sandwich board announcing him as ‘Low Fell’s Cleverest Man. Apart from Terry Chipstick on Wells Avenue’.

In his ‘Letter to the editor’, ‘Disgruntled of Shrewsbury’ also pointed out that I painted over the weekend existence of the unofficial Film Noir club, of which I and another of the group (Tony) were members. Our innocent viewing of classic old movies raising questions amongst the other party members about the two of us ‘having feelings’ for each other……. Something both of us categorically deny.

Now sitting at home in his ‘Gary Strachan’s blogs are s***e’ t-shirt, I hope Jeff feels I’ve adequately addressed the concerns raised in his perfectly affable ‘Letter to the Editor….’

I have to say his correspondence was far less confrontation than his mood when, on Saturday, Tony and I advised him he couldn’t join the Film Noir club. A decision taken as he always spoils movie endings, not to mention anger at his point blank refusal to wear the club’s uniform of lederhosen and oven gloves.

Despite his commitment to donning the Film Noir club attire, my brother Ian was also refused membership after a confusing interview gambit of “I’m not going to view any of the old black and white films…… I will, though, watch the movies shot in monochrome.”

None of the other lads had an interest in joining the club. Although there were rumours abound one of them was keen to serve intermission ices dressed as an usherette. 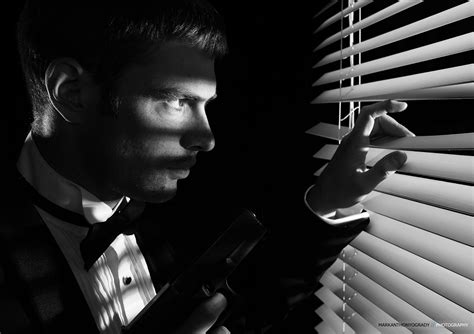