Today’s the eighth birthday my diminutive wife has celebrated since her November 2010 prognosis, at the age of 44, indicating her condition would make it unlikely she’d celebrate many more 11th Junes…. Obviously, I’m paraphrasing as medical professionals would never use language as insensitive to a patient – The message though was the same.

As a consequence of the incurable nature of her rancid canker, she can’t ultimately reign victorious in this war. That being said, my spouse has prevailed in many battles to reach this day. Her unexpected longevity courtesy of immeasurable courage, stoicism, determination and the expertise of some of the finest oncologists, radiographers and nursing staff in the country.

This fight against her foe bearing a metaphorical comparison to Churchill’s*** defiance in June 1940 when telling a beleaguered parliament:-

*** – That’s the UK Prime Minister of the time Winston Churchill, not the dog from the insurance company’s adverts. Winnie possessed far greater erudition than the gormless puppet canine whose vocabulary includes little more than the exclamations “Oh Yes!” and “Oh No!”

It would be utterly obscene to pretend my wife Karen’s fight bears the scale of misery that tainted World War II. Despite my love of the whimsical, I’d never be so crass and insensitive as to trivialise the 1939-1945 conflict in any shape or form.

My goal in this narrative is an attempt highlight the similitude between Karen’s robust defiance against her nemesis as Churchill’s message above of ‘ya boo sucks to you Fritzy!’****. My WWII comparison that of her similar aspirations to the under-pressure Allies during the German invasion of France in 1940 – Mere survival against an odious foe.

**** – Apologies to Richard Curtis and Ben Elton for stealing the ‘ya boo suck to you Fritzy’ comment from Blackadder Goes Forth.

Anyhow, enough of this monologue of misery. Today has to be a day of celebration, 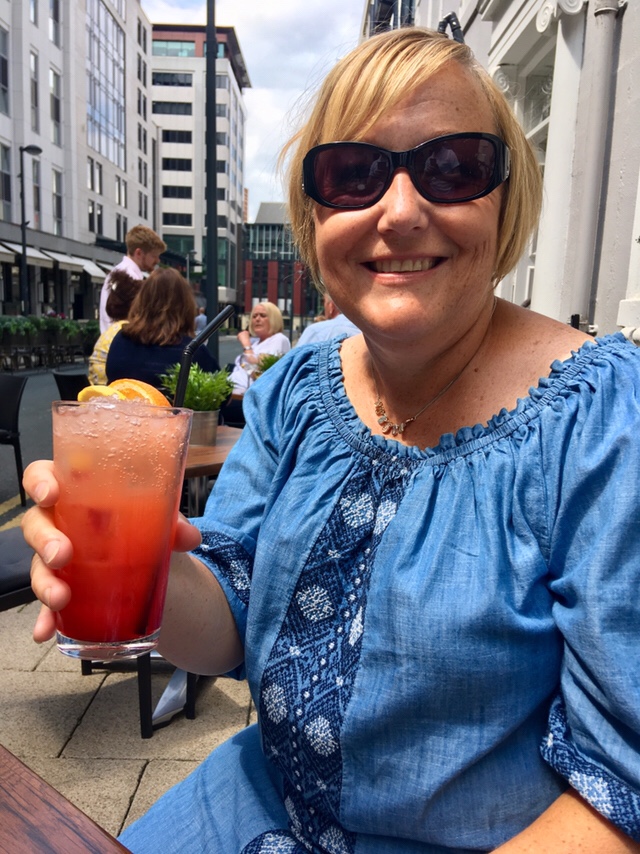 My wife’s sat opposite me in our garden, her sunny disposition mirroring the West Yorkshire weather this late spring afternoon. Surprisingly, even the fact she’s speaking to her mum and dad on the phone doesn’t seem to have dinted her euphoria.

Earlier Karen waxed lyrical about the birthday gifts I’d bought her……..Well she did if the response “They’re alright, I suppose.” can be classed as waxing lyrical.

The ungrateful mare – Lots of women would sell their soul for a Hugh Fearnley-Whittingstall tankard and condiment set…….. Incidentally, if you are one of those women you can have the set my missus doesn’t seem to want.

Seriously, though, I’ve got my wee missus tickets to see Beyoncé, face cream and a download of her favourite movie ‘The Greatest Showman’, for which she’s very grateful.

As I pen this segment, Karen is troughing on birthday cake, while reading a book by Dorothy Koomson……. Flaming women and their multi-tasking skills – Chuffing show-offs the lot of ’em.

She tells that the story is gripping, going as far a proffering the fictional tome is “The best book I’ve ever read sat in this patio chair!”….. As I’ve no idea how many works of literature she’s actually read in that seat by the lavender bush, it’s hard to gauge the magnitude of her superlative……. My lack of clarity not helped by the fact she’s holding the book upside down.

Well, at least she didn’t say “Well, it’s better than the b*ll*cks you write, Gary!”

Happy Birthday Karen!….. Your fight, spirit and determination continue to astonish me. Here’s to number nine in twelve months time.