Skip to content
By Gary StrachanJune 8, 2018Blogs fiction humour parodyLeave a Comment on On The Last Train To ……..

Friday 8th June – Yesterday, I spoke with a friend stricken by recurrent depressive disorder. A thought-provoking conversation where he revealed the mental lows regularly experienced in the dark corridors his erratic mind.

This individual, who for the purposes of anonymity I’ll call Lord Smedley, told of his existence in this mental gutter. A solitary domain where he often resides until the metaphorical cavalry arrive in the shape of happier events/medication. Bringing with them a sanctuary free of existential darkness until his next episode.

His lordship told of living with this indiscriminate illness unimpressed with his position as peer of the realm***. Wreaking the same havoc as with members of the proletariat. Depression no respecter of it’s victim’s financial wherewithal, social status or whether they know Richie from TV show Love Island****.

*** Actually, my friend isn’t a peer of the realm. As I said, Lord Smedley is a fictional name bequeathed to hide his identity. Please ignore any reference indicating a genuine place in the British aristocracy.

**** The character name Richie from Love Island is fictional. A disinterest in the show means I’ve absolutely no intention of watching it to ascertain if he does actually exist. If there is a Richie it’s purely a coincidence, and I’d venture Lord Smedley won’t be acquainted with him.

Earlier, my wife Karen asked what was an today’s itinerary for G Strachan esq. An enquiry to which I responded:-

“Who the hell is Lord Smedley?” a bemused Karen queried.

“He’s a mate who suffers bouts of depression. I’ve given him that pseudonym to maintain his anonymity in today’s narrative….. A tale I’m writing attempting to raise awareness of living with mental illness.” I sought to clarify.

“I understand the need to hide his name in a blog, but why all the secrecy when it comes to veiling the details from me….. After all, I already know it’s Bagsy your talking about.” my spouse admonished.

“I didn’t know you knew about his mental health issues!” I told her, attempting to recover from my current position of debating weakness.

“It was obvious to me who it was…… You’re always referring to Bagsy and his depression…… Mostly disparaging comments as well, you insensitive sod.” Karen proffered.

“I’m never be disparaging about Lord Smedley, errrr…. Bagsy. I’m a very sensitive man – Caring, thoughtful and with great humanity!” I argued, hurt at my missus’ accusation I’d previously made light of his mental problems.

“You’re joking aren’t you?!…. I’ve heard you call him names like Looney Tunes, Half Wit, Thick S***e, Cuckoo Brain and On The Last Train to London.” my wife eruditely argued.

“Terms of endearment?!!….. How the hell can calling a person Looney Tunes be classed as showing affection for it’s recipient?!….. Particularly when they’ve been diagnosed with recurrent depressive disorder“ Karen forcefully questioned.

Despite being under pressure, perspiring and with little helpful debating ammunition at my disposal, I foolishly fought my corner. “He normally just laughs off terms like that…… He’s fine with it!”

“He wasn’t last week when you said he was On The Last Train to London…….. Incidentally, what the hell is that supposed to mean?” my wife pressed.

“I’ve no idea what it means……. I made it up as an alternative expression to describing him as three sheets to the wind…… It sounded like an innovative adage for someone with mental health problems.” I idiotically argued.

“People referred to as three sheets to the wind are drunk, not mentally tapped, you idiot.” Karen scolded.

“No worries, I now refer to him as On The Last Train to London, anyway.” I cleverly (at least I thought) responded to the missus.

“But that’s not even a proper adage. You made it up last week…… They’re merely a collection of words without context when used to highlight the state of a persons mental health!'” Karen berated.

“Ok, ok….. I get your point……. How about if I change it to On The Last Train to Ipswich?” I enquired, seeking a conciliatory conclusion to our verbal interaction.

“NOOOOOO!….. That equally as meaningless, you fool!” barked back my wife, her patience now appearing close to breaking point.

In despair at my whimsy, Karen then added “I don’t know about Lord Smedley, but I’d say categorically you’re on the last train to London, Gary!” 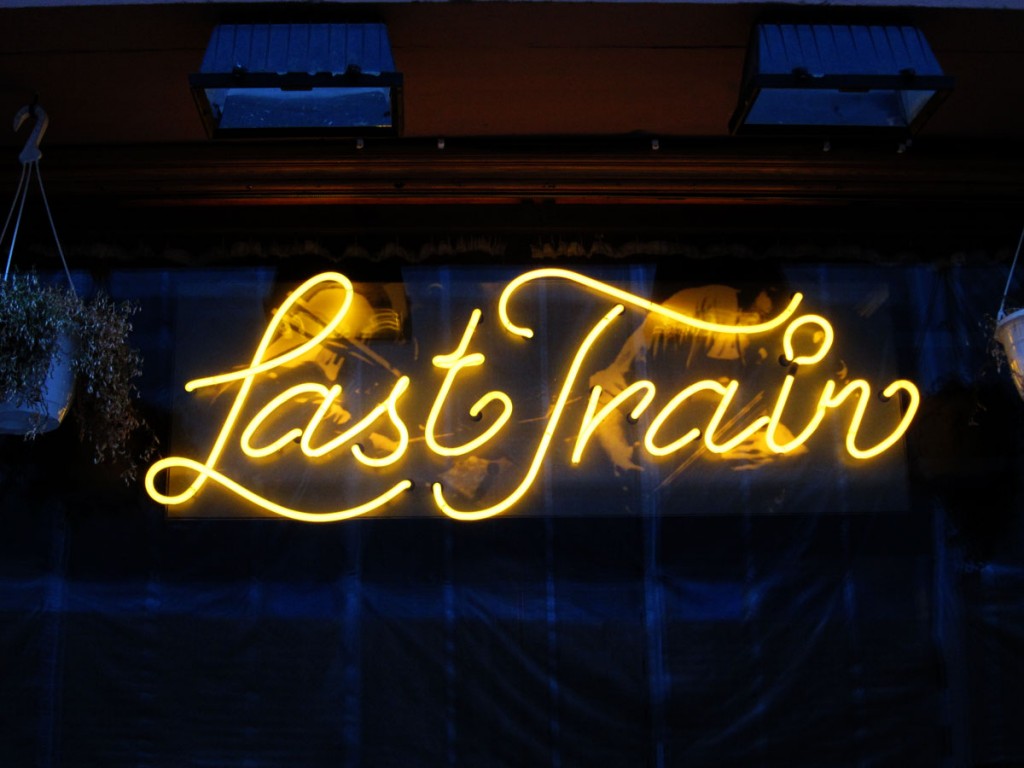