It’s Halloween, or “A neet fir scraggsers and kets” as an elderly acquaintance bafflingly labels it. A night where ancient pagan liturgy meets with the contemporary ritual of sugar fuelled kids in scary costume.

This evening in various parts of the globe, homes will ring to the annual sound of millions of doorbells and cries of ‘Trick or Treat!”…… Apart from in the maverick People’s Republic of Birtley where the kids are encouraged to thumb their noses at tradition and say a defiant ‘Treat or Trick’.

In chez Strachan, this evening will greet a further sound of my missus exclaiming “I told you we needed more fun size Mars bars!”, when we prematurely run out of candy. This the outcome of me eating half of what we bought in for tonight’s revellers while unpacking our weekly shop.

Halloween has sure evolved since my childhood. From memory, in those pre ‘Trick or Treat’ days, we’d spend the evening wandering around our cul-de-sac aimlessly. Our hollowed out turnip lanterns the only clue this night was anything out of the ordinary. 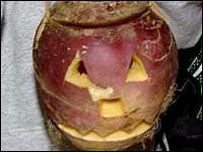 If truth be told, the ordinary nights were probably more eventful than Halloween, as there was a daily mob press ganging locals into becoming ships crew members. Although, I suppose a night off from screaming blokes carrying fire lanterns dragging ‘volunteers’ to the Tyne port was welcome now and again.

As we ambled about the street on Halloween, I don’t ever recall receiving sweets from anybody, just the occasional excitement of a lantern candle going out, resulting in a return home for it to be re-ignited.

They were simple days, but we were happy. Although, if we’d have known that in 10 years hence kids would be getting shed loads of sweets on the night of 31st October, we no doubt would have been well peed off with our plight!

I recall some years we were party to the excitement of apple bobbing at a neighbours Halloween party. I have to say, though, getting soaking wet retrieving an apple with your mouth isn’t quite as fulfilling as staying dry and getting bags full of gummy bears!

Actually, coming to think of it, All Hallows’ Eve was pretty boring back in the 1970’s. Not only did we not dress up, but my siblings and I had the ignominy of having to wear balaclavas as we strolled the street with our less than intimidating lanterns.

One year our Ian wore his backwards to relieve the boredom…… He could entertain himself very easily could my brother!

Unfortunately this freaked out a passing elderly neighbour who, mistaking him for a vertically challenged burglar, hit him on the arm with her rolled up umbrella.

In those days you’d let things like that drop as we were told your elders are always right. Absolute nonsense of course, but Ian shrugged it off and burgled the old ladies neighbour instead!…. That is a joke by the way, my younger brother definitely isn’t a thief……. I haven’t got an older brother, but if I did I’m sure he wouldn’t be a petty burglar either!

Anyway, by the time I’d arrived into adulthood on my trusty steed Ned, the UK had adopted the Halloween of our American cousins. A Novembers eve wonderland of skeleton costumes, hideous masks, sugar overloads and fake facial warts.

This signalled the end of utilising turnip lanterns. Instead, elaborately carved pumpkins became the order of the day. Now when we open the door to top up a costume clad kid’s candy bucket, we are greeted by lanterns carved with the intricacy of a Italian Renaissance sculptor.

So basically Halloween is great for kids now compared to my childhood. However, it’s much worse for parents as their offspring are so full of sugar they don’t run out of energy until 3am the next morning!

Anyway, I best get off as I need to buy some kets fir scraggsers!