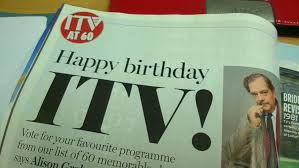 On this day 60 years ago, the channel now known as ITV became the first channel to challenge the BBC’s television monopoly. On its inception it was known as ITA (Independent Television Authority) and, unlike the BBC, was not licence funded but financed through advertising revenue.

The channel was launched following a ceremony at the Guild Hall, London. One of the speakers at the banquet, Morgan Claims, attempted to allay fears of adverts being broadcast during shows, by reassuring people it gave them an ideal time to make a cuppa without missing any of the show.

Additionally, he told his audience of a future TV marketing Utopia where meerkats, rotund tenors and a builder pole dancing would peddle insurance with their hilariously creative advertisements.

Mr Claims then went on to advise that now the viewers would have the choice of hearing regional accents as opposed to plumy BBC English on the licence funded channel if they so desired.

He talked of a TV world where cricketer Fred Truman’s dulcet Yorkshire tones would present a show incorporating pub games, every continuity announcer would be a Geordie and Lenny Henry would make a career from a half decent joke on a 1970’s talent show!

The first programmes on ITA were hurriedly aired when a fight broke out following the discovery that Morgan Claims was in fact a waiter, not one of the scheduled speakers! 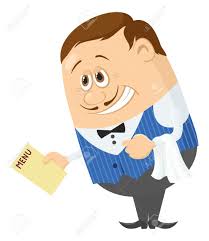 Amongst the first ITA programmes were a variety show and a cop drama starring John Gielgud. As violence was frowned upon in those days, villains were method acted into submission by Gielgud. 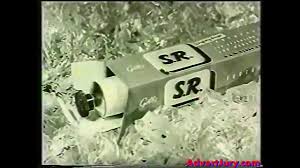 There were 23 adverts on that first night of broadcasting on the commercial station, which is around the same number shown during last Sunday’s episode of Downton Abbey!

Amongst the products marketed included Cadburys chocolate and Esso petrol. Cadburys was advertised with the unforgettable tag line of  “Cadburys chocolate. Tasty, satisfying and much better than that shite you currently eat!” ……… In the 1950’s, advertising copywriters had not evolved into the creative geniuses they are these days.

One of the final programmes that night was a boxing match. This wasn’t initially scheduled but the producer thought the scrap between Morgan Claims and the Security Guard was TV gold so aired the earlier recording.

ITA’s broadcasting concluded on that first evening at 23.00 with the Epilogue.

What was the BBC’s reaction to the loss of the television monopoly? Apparently, they used the spoiling tactic of killing off Grace Archer, a leading character in their flagship radio show The Archers. This pulled in an audience of 20 million.

Auntie Beeb dismissed allegations that it was deliberate timed to pour cold water on their new rivals. However, they refused to comment on the alleged link to Morgan Claims.

The initial franchise for ITA was to the London area only. However, by 1965 franchises had been rolled out regionally in the UK, when the channel became known as ITV. 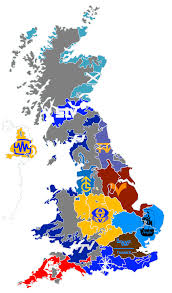 What is ITV’s legacy to its viewers over those 60 years? Well everyone would have a different answer to that I suppose. A high proportion would probably say Coronation Street, any of Simon Cowell’s reality shows, An Evening With …. , anything with Ant & Dec in, Benny Hill, Kenny Everett, On The Buses, Man About The House, Sunday Night at The Palladium to name a few.

Happy Birthday ITV! …………. It’s good to see that Grace Archer being killed off didn’t do you too much damage!