I went to the York Food Festival yesterday with my wife, son and daughter. The venue was the pleasant tree lined square on Parliament Street, in the centre of York. Here a throng of hundreds of visitors, buskers, artists and a street entertainer balancing on a pole, all added to the conviviality of the occasion.

As we walked past the pole balancer he looked pretty grim. I’m not surprised really to be honest. No one was paying him much attention and he looked like he could do with a good feed. Even the pole was wider than him!

The smell of the various foods emanating from the square must have tortured him, as he sat surveying the revelers from his lofty perch. I felt like asking if he wanted a burrito but thought it might be logistically quite difficult to consume while balancing on a pole, so moved on!

Someone balancing on a pole! 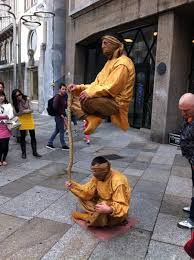 The setting of the festival with its associated stalls and artists brought to mind a lazy stroll through the tree lined streets of Greenwich Village, in New York. A meander designed to appreciate the artistry of a scruffy bearded bohemian,  a shoe polishing police informant or Woody Allen playing clarinet.

Greenwich Village and some Bohemians leaning on Starsky & Hutch’s car 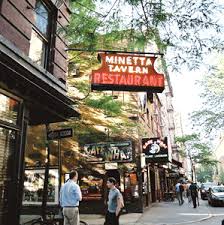 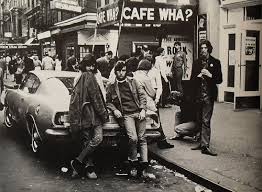 Walking around the periphery of the food stalls, I came to a halt beside an impressionist painter who was gracing his canvas with a creative visualisation of what looked like the surreal sight of a horse surfboarding, but I couldn’t be sure!

When I say he was an impressionist painter, I should clarify his painting wasn’t up to much but his impressions were fantastic. His Roger Moore, in particular, was uncannily accurate.

As I ambled away from this guy, I disingenuously told him it was a good painting and asked what the subject matter was. He replied, in the voice of Al Pacino, “Thanks mate! It’s a horse surfboarding!”……. His artistry must have been better than I’d given him credit for!

Next to the equine painter, I became transfixed with a landscape artist sat quietly and thoughtfully gazing at his subject. After a while he allowing his brush to replicate unerringly, in watercolour, the sight he beheld. I have to say I wouldn’t personally purchase a painting of the Marks & Spencers store in Parliament Square. Kudos to the guy, though, he was very talented. 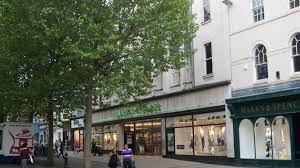 I foolishly tried to look as though I knew a bit about art by telling the artist I had a Chopin painting at home. He responded patronisingly “Chopin is a composer!” I countered this by informing him “Is he? No wonder it’s such a crap painting then!”

He rolled his eyes in disapproval at the weak gag and my family and I walked towards the food stalls, as we were as peckish as a pole balancer!

As we ambled slowly, I embraced the eclectic sights, sounds and smells emanating from stalls pedaling fodder from countries as diverse as Mexico, Italy, India, China, Germany, England and the Peoples Republic of Birtley.

The Peoples Republic of Birtley (PRB) is the north eastern town in England where my in-laws live. Rumoured to be famous as the place that inspired the Ant & Dec TV show I’m A Celebrity. Get Me Out of Here! …….. Allegedly, it was the first words the Geordie duo uttered as they drove through the town!

The national dish of the PRB is ‘Peas Pudding on Clacky’. I’ve known Karen’s parents for over thirty years but I’m still none the wiser as to what Clacky is!……. ….All I know is it’s a well kept secret, similar to the recipes of the Big Mc sauce and Colonel Saunders chicken coating.

It tastes a bit like chicken and, to be honest, it could well be chicken. However, when I ask Karen’s dad the recipe, his response is incomprehensible. What he responds with sounds like shoe innersoles but I’m pretty sure that won’t be the predominant ingredient! 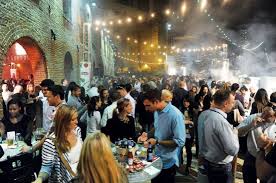 The York Food Festival is on until 27th September and is well worth a visit. How would I recommend you spend your time there?! Eat, drink, be merry, get a kebab for the pole balancer and try the Clacky! ………..Oh, and take in the rest of this beautiful historic city!