Saturday reveille brought in it’s wake the melancholic news another of my boyhood footballing idols had passed. Jack Charlton becoming the third Leeds United legend to’ve died in just a matter of months.

The one club footballer, who for nigh on two decades represented the club with distinction in on over 700 games, joining recently deceased team mates Norman Hunter and Trevor Cherry on departing this vale of tears.

The giant centre back, only one of eleven players to represent England side to World Cup victory, in 1966. Adding to his world champion medal with a host of club gongs, including  championship, FA Cup, League Cup, two Fairs Cups and Charity Shield winners medals.

It was Big Jack who presented me with one of my first boyhood recollections of Leeds United when, in the 1970 FA Cup Final, from an Eddie Gray corner he headed them in front against Chelsea.

Yours truly seven years old at the time; the majesty of Don Revie’s warriors in white very recently appearing upon my radar. A wondrous introduction to football, which’d be enhanced further a few weeks later by the manner of Carlos Albertos Brazilian’s World Cup victory.

Between the same Wembley post Geoff Hurst scored his controversial goal in England’s own World Cup win four years earlier, Jack’s header itself only crossed the goal line by a matter of inches. The defender’s powerful downward header almost dying on the heavily sanded pitch, before almost apologetically rolling over whitewash.

It was possibly the least ‘sexy’ FA Cup Final goal you’ll ever see, but it mattered not. Leeds were in front and my parents, brother and me leapt from our respective pews in reverence to Big Jack.

At that moment, the unreliable monochrome pictures playing out from our old black and white TV, painting the most wonderfully kaleidoscopic canvas. A memory that 50 years hence I still treasure and will take with me to the grave.

There was inevitable disappointment when Leeds ultimately lost the cup final after a replay. However, although this episode ended starkly, recollections of brio resultant from Big Jack’s scruffy goal never fail to raise a contented smile.

Later in the same game, Charlton displayed the demanding high standards expected from himself and colleagues following Chelsea equalised Charlton’s opener. This leveller the consequence of a terrible rick by Leeds goalkeeper Gary Sprake, letting Peter Houseman’s weak drive slide under his body.

From his berating of Sprake, it’s clear the keeper wasn’t gonna remain on Jack’s Christmas card list long if he did get his head out of his backside!…. Although, I’d proffer the admonishment relayed by the defender was a tad more colourful.

As a child, yours truly witnessed a clutch of Leeds United trophy wins in which Jack Charlton was an integral component of the victorious footballing machine. Sadly, there were also many wars in which we succumbed. Be that at the hands of a worthy opponent, hamstrung by corrupt referees, or shady agendas from football authorities.

However, even through disappointment of campaigns where we ultimately lost the war, by god, there was some wonderful battle victories along the way.

I mentioned above, Jack Charlton’s header putting Leeds 1-0 ahead against Chelsea was possibly the least ‘sexy’ FA Cup Final goal you’ll ever see. However, on reflection, it was clear Big Jack didn’t do sexy anyhow. He did functional, committed and uncompromising.

For him winning was the most important factor. This mental and physical toughness borne from an upbringing in the tough Northumberland environs beside the Ashington coalfields.

As a boy, in the 1940’s, playing football from dawn to dusk with a tennis ball, Charlton’s fellow players included brother Bobby (who also went onto achieve legendary status in the game). His visual companions heap after heap of coal which, as WWII raged, awaited shipment towards the war effort.

Did he ever step over the line to achieve his footballing aspirations? Physically he certainly did. Alongside many ‘hard men’ from that era of the game his mentality was, if you want to play football against Leeds United we’ll indulge you in a footballing lesson. However, if your agenda was a more uncompromising style of play, we’d more than happy to oblige.

Of course, Big Jack made significant managerial contributions after retiring from Leeds United. These including successful spells as manager at Middlesborough, along with as gaffer of the Republic of Ireland whose fans revered him with almost Pope like status.

However, for my personal tribute, I want to concentrate on his contributions to Leeds United, bestowing a plethora of childhood recollections as golden as his whispy locks. 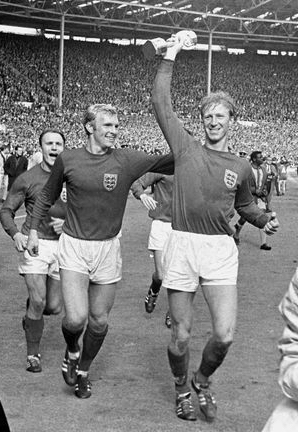