Today’s journaling of my daily musings was delayed by yours truly’s ham-fisted spillage of potato crisps; subsequently necessitating a clearing of chips enveloping the laptop keyboard. The typing keys laden with these potato, sunflower oil and sea salt snacks briefly hamstringing my ability to wax lyrical about recent life events (fact or fiction).

On witnessing the ungainly scattering of tuck, I’d a conundrum whether or not to eat the spilled grub which residing uninvitedly across my keyboard. My immediate thoughts around the next move revolving around the five second rule (FSR). In particular how this incident affected the spilled potatoey contents in the context of the FSR.

This event triggering thoughts such as:-

Should I risk eating the crisps which the five second edict deemed unfit for human consumption?….. Or would my longing for a salty nosh injection render dismissing the spilled food rule a risk worth taking?

Whatever I decided as an eating strategy, I hastily concluded my first task was scooping the potato chips back into the bag pronto. After all, as a former IT hardware technician, I’m fully aware the level of damage crisp debris could inflict on my keyboard’s workings.

In addition risk to hardware, there was also a food hygiene angle to consider. With only five seconds minus thinking time at my disposal after the spillage, speed of debris removal was of the essence.

Consequently, I undertook three vigorous swipes with my hand across the typing keys, in the process removing the majority of food debris back into its former pack. The remaining smaller crumbs and salt grains were scraped into my palm by napkin for onward disposal on an adjacent cafe plate.

With new found serenity enveloping my soul, and the discarded crumbs and salt staring back at me, I took a moment rejoicing swift reflexes meant the majority of my snack remained fit for consumption. Smug at this saving of the crisps, I went on to ungraciously moot under my breath “Up yours, five second rule!!”

A lack of contrition and grace, by thumbing my nose at fate, though, coming back to haunt me within moments. My angst levels once again heightened when a message passed from the OCD domain within my neurological corridors reminded me I’d not timed my crisp recovery action. Consequently, I’d no real certainty the contents scraped hastily back into the bag hadn’t breached the five second edict.

Disenchanted at this uncertainty, my obsessive compulsive disorder threatened to make the rest of today one of pathogen ingestion torment if I dared to eat the salty snacks; which may’ve lain for over 1/20th of a minute on my laptop keyboard. 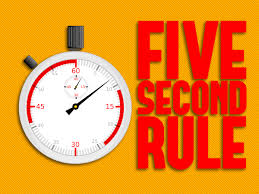 A more pragmatic side of my person, who sadly has poor influencing skills when confronted by my OCD persona, argued “It’ll be reet, you pedantic sod!….. Forget about it!”

However,  the germaphobe inside me would’ve none of the pragmatic argument, prevailing when the decision against risking food poisoning was made. Consequently, I’ve written this blog deprived of the salt I was craving from my luncheon snack.

Perhaps, though, the whole episode was a blessing. Fates way of ensuring I avoid foods which can potentially increase my blood pressure, an affliction I’m keen to dodge post last years heart issues.

Right I need to make tracks……… Incidentally, does anyone want a 3/4 full bag of ready salted crisps which, along with a possible case of salmonella, are free to a good home.