The narrative penned earlier this morning was the 1600th I’ve written since embarking on this literary journey in March 2015. An odyssey which was the catalyst to dragging me from the metaphorical ditch where at that juncture of my life I’d lain for many months stricken with depression.

Although my penmanship was/is unable to resolve many of the elements of my life that weighed heavily then (and remain now), this self-help strategy proved instrumental in making GJ Strachan realise he wasn’t an unemployable oxygen thief. Thoughts frequently roamed his neurological corridors during that fraught era. A time when his mental health wouldn’t allow him to countenance any notion other than he was utterly worthless.

Mercifully though my self-counselling via a conduit of quill and parchment***, along with the setting up of my website writesaidfred.org, eventually banished those impressions of pointlessness. Awakening my mind to the fact that yours truly has much to contribute to not just mine but other peoples existence; both from an intellectual and practical perspective.

*** – I couldn’t afford a laptop when first embarking on the literary journey.

I’ve learned a great deal about myself during this journey. One of which, despite including many entertaining observations, essays which I classed as good when I first started were on later re-read overly wordy and sloppily edited. I still make grammatical errors and without editor input will continue to do so; however I definitely think experience has improved the quality of my published work.

I also anticipate a few months/years down the line I’ll deem the prose written now (which I judge to be decent) to be below the standards I’m striving to attain.  However, that doesn’t faze yours truly as I realise that’s all part of the organic growth of improving as a writer.

I’ve no tutor to engage for guidance, consequently all improvements have to be self-taught with the pace of improvement subsequently being slower than desired. However, I’ll live with it as long as a mindset of continually looking to improve my penmanship is maintained.

Likewise, unlike when I embarked on this sojourn in March 2015, I’m never fazed if I sit down and suffer from writers block. Experience gained during the past four and a bit years telling me once I start an essay I’ll reach the daily minimum of 500 word target I set myself.

The feedback I’ve received over the last 50+ months has generally been positive. Although I’d accept that readers are more inclined to posit favourable reviews as opposed to informing me” I read yesterday’s**** blog, Gary….. It was absolute shite!” 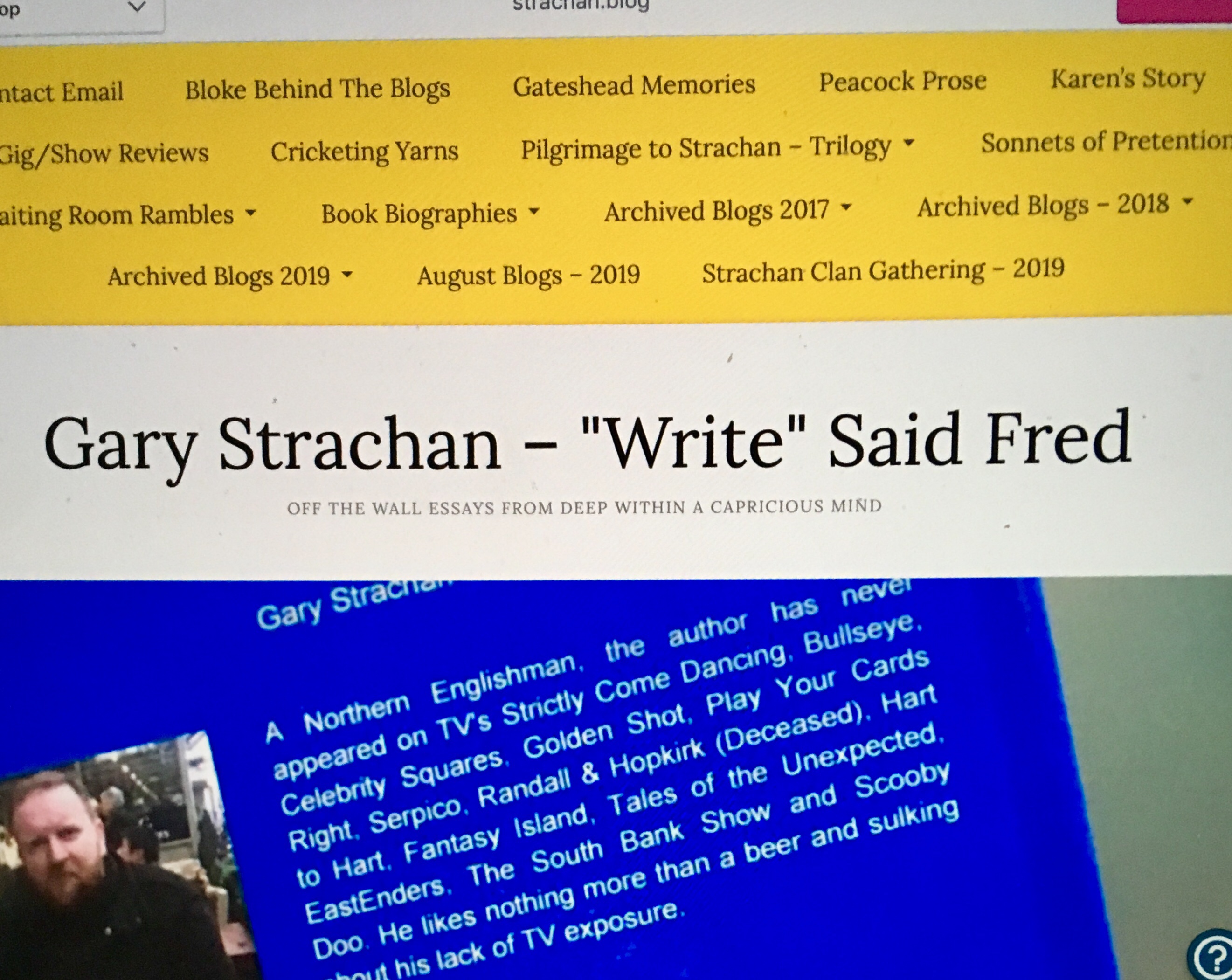 Many have said that they love some of my daily narratives, but haven’t got a chuffing clue what the hell I’m rabbiting on about in others. Which is a pretty accurate reflection of my prose, and how I find the experience when re-reading them at a later juncture.

That being said, I make no apology for the overly silly stuff which I self-indulgently include. Like poetry or deeply dark monologues, I incorporate intentionally absurd observations to test my versatile as a writer.

Yours truly accepts ridiculous and deliberately stupid fictional pieces are unlikely to be embraced by readers other than a particular niche audience. Additionally, I acknowledge my compositions will be erratic of literary distinction. After all, even the best writers will produce, or have produced, collective locutions of varying quality.

I suppose ultimately those who pursue the penmanship path will be judged on their best pieces. Without wanting to exhibit unrealistic levels of vanity, I’d like to think of the 1600 pieces I’ve written my best narratives/poems are worthy of positive critique.

Of course it’s important to me that my readership enjoy my prose. However, even if they don’t I’m proud of myself for undertaking this path while seeking to drag myself out of that dreadful mental health ditch where I lay in spring 2015.

Many of the dreadful existential circumstances that were around in March 2015 remain. If anything, with me suffering a heart attack in January and a gastric haemorrhage in April this year, my life is tougher now than ever.

However, those 1,600 literary pieces, incorporating over a million words, which took over 5,000 hours to write and have attracted around 70,000 website hits from around 150 countries globally, mean my self-esteem is infinitely higher than four years ago.

With my website not being monetised, some may question why I’ve ‘wasted’ thousands of hours at the keyboard for no reward. On the contrary, though, positive words from readers and the cathartic buzz I experience from getting my ideas out there fulfil me more than financial recompense ever could.

Hopefully one day the best sections from those 1,600 literary pieces I’ve published on writesaidfred.org will be appreciated by bigger audiences and, who knows, maybe see me earn a financial reward for those million plus words.

Meanwhile, while awaiting that growth in audience, I’ll continue to regularly look over at the 34 books in my bookcase with pride. Tomes made up from the content I’ve written over the last 50 months.

1,600 essays/poems that would’ve never seen the light of day if I’d have decided to ‘call it a day’ , as I often wanted to do during my very darkest times in those dreadful months at the start of 2015….. What a waste that would’ve been!!