Yesterday I stood amongst an army of green shirted MacMillan volunteers supporting a charity football game. This emerald clad battalion, along with numerous other like-minded individuals, intent on raising funds for both MacMillan Cancer Support and the Once Upon a Smile charity. The latter an organisation set up by Emmerdale actor Danny Miller to provide families with support during times of bereavement.

Two excellent causes who’ll hopefully benefit handsomely from the benevolence of the large crowd at this gratifyingly well-supported event. The fundraising jamboree in question held within the West Yorkshire football base of Ossett United.

I’m unaware how many individuals ordinarily click through the turnstiles on the North East Counties division one side’s normal match day. However, I can confidently posit if it’s anywhere near the number who embraced yesterday’s charitable function their attendances will be nearer 1,000 than 12.

Sorry I can’t be more accurate than that, but I’d have to have the savant skills of Raymond Babbitt (from movie Rain Man) to accurately count the scores of people attending yesterday’s event…….. Either that, or I could’ve just asked the guys operating the turnstiles, I suppose.

My own personal voluntary remit included presiding over a MacMillan stall aimed at raising awareness of the cancer support options provided by the organisation. Along with erecting posters and balloons reminding attendees of one beneficiary of their magnanimousness.

As I often experience when undertaking these voluntary roles, I got to engage in conversation with some inspirational people.  Selfless individuals who exhibit great humanity and positivity of mind. A huge fillip in these days of misguided self-entitlement and the selfish notions of those who perceive they shouldn’t ever be inconvenienced.

Years ago, public-spirited individuals of this ilk would’ve been referred to as the ‘Salt of the earth.’ However these days, since the link to cardio-vascular related illness to excessive intake of sodium chloride, it maybe more appropriate to call them the ‘Sodium free salt of the earth’.

Either way, I’ve nothing but admiration for the individuals who give up their free-time to organise, facilitate and support these events. Invaluable contributions assisting in raising much-needed funds for a charity that gives numerous different channels of support to cancer sufferers and their families. Something, I can vouch for from personal experience during my wife’s oft fraught eight and half year battle with cancer.

I can’t imagine how much worse an already dreadful last 102 months would’ve been if MacMillan Cancer Support hadn’t existed. One thing I do know is without the counselling, treatments, education, and knowledge that support was only a mouse-click or phone call away, this odious odyssey would’ve been significantly more challenging.

The charity providing my family with strength to engage in the grim battles of a war which, in my wife’s case, can’t be won. Her stage four diagnosis meaning her disease is incurable. Her fight and stoicism, though, mercifully remain unquenchable.

Consequential of this support, I view occasionally offering my free-time for MacMillan as minor recompense for their support of my brood. Even if you don’t need or want to take advantage of the gratis services provided, it’s darned re-assuring to know they’re there if required.

At this juncture I’ve no idea of the amount raised by the event. In the absence of Raymond Babbitt, I’ll have to wait until event co-ordinators announce the ‘scores on the doors’ in the coming days. Overall, I’d an enjoyable day which, from the numbers of Ossettians who attended, I’d assume will be classed as a great success by event organisers.

Driving homeward on the M1, I felt content with the day’s events. Not to mention delight at my impulse purchase (below) signed by a childhood footballing hero of mine, secured during the post-match sports auction. 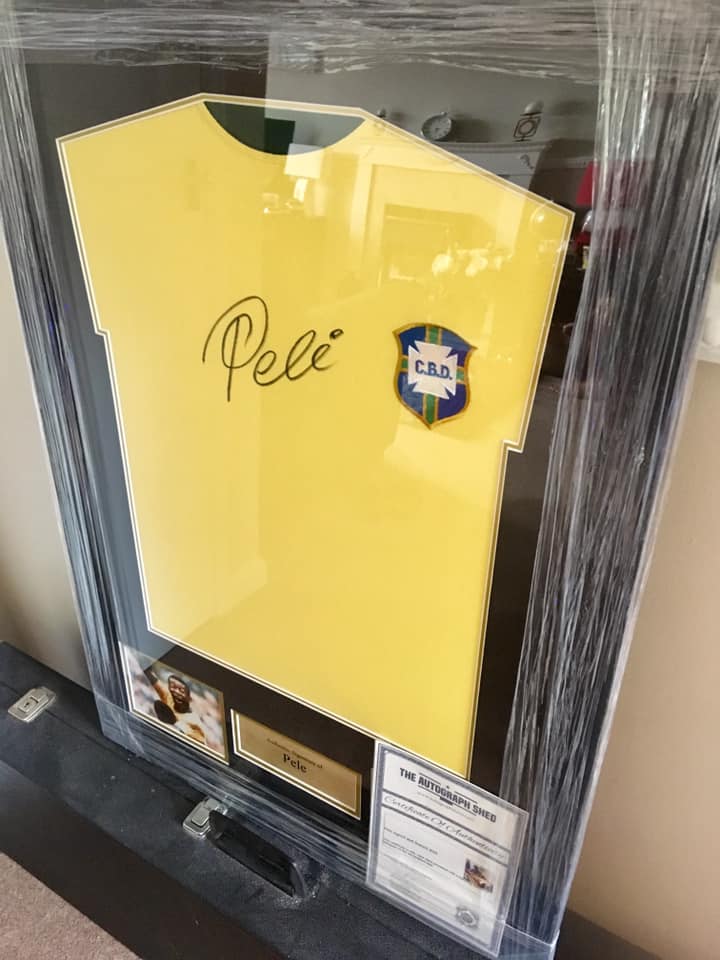