I’m writing this piece wearing a pair of earphones in what’s turned into a futile attempt to negate the sound from a daytime TV show my wife is currently viewing. Although the gogglebox’s volume is diminished slightly by the over the head speakers, I’m still able to hear Charlie Dimmock and the Rich brothers yapping on BBC1 about an ongoing horticultural revamp.

Being easily distracted and craving silence when I put pen to paper, I’m finding the landscaper’s commentary of the tasks at hand bothersome. This requirement for quiet the reason I choose not to shut out television sound by feeding music through the headphones.

As a legacy of being unable to drown out the TV audio, I’m being bombarded with pergola construction techniques, merits of acis plants in a contemporary garden, along with the virtues of undertaking yearly lawn scarification. It’s stuff that may come in handy one day, but I don’t want to hear it while endeavoring to concentrate on the literary task ahead.

The renovation plans of Ms Dimmock and the Rich lads are simple yet innovative designs  and ideas. Refreshingly sensibly budgeted revamps of normal size gardens, meaning they’re far more attainable for the viewing public than a majority of horticultural makeover shows.

You don’t need to be Poirot to conclude the root cause of why frugality reigns in this garden revamp show. Chazza and her two young accomplices receive a much lower budget in comparison to similarly formatted programmes on ITV, such as Alan Titchmarsh’s peak time offering. A consequence of the TV license funded channel not having a plant pot to p**s in compared to it’s commercially funded rival.

So while Alan Titchmarsh and his team are utilising Faberge eggs for garden decor and a top soil filled vintage Aston Martin BD2 as an upmarket planting tub, Chazza and the lads are having to fill their renovated garden with bulk bought bedding plant plugs and hanging baskets made from one of Ms Dimmock’s old bras.

In an earlier blog, A Pointless Prize, I wrote a tongue in cheek piece about the poor rewards on offer from BBC game shows. An unavoidable consequence of a hamstrung auntie Beeb being predominantly financed by the TV license payer, as opposed to receiving large infusions of funds from corporate advertising, akin to their main terrestrial rivals.

The BBC’s financial wherewithal not helped by over cautiousness when commissioning new and innovative shows. For example, declining the opportunity to secure the rights to my new concept for a game show, which has a work-in-progress title of ‘Hats Are Great’.

This game an epiphany manifested itself to me after an acquaintance’s exuberant rant about the lack of millinery shows on television. Concurring with his controversial sentiments ‘Hats Are Great’ was born.

The format of the show is for six contestants to name as many hats in 30 seconds as they can. The winning two go into a final head to head element of the game called Keep It Under Your Hat!.

Here, through a series of questions, each of the two finalists have to guess what’s under each other’s top hat. If they both guess right, the winner is decided by the Hatometer, which senses through audience applause who was the most popular out of the two finalists. If they’re still tied after the Hatometer, it’s victor is decided on a ‘best of three’ game of paper, scissors, stone. The prizes for winning were a gold painted trilby and lumbago.

Yours truly is incredibly proud of this game show format, which, although needing slight rule tweaks, I deemed would rejuvenate tired old daytime TV schedules. Programme planners at auntie Beeb, though, were having none of it; deeming the format as facile, convoluted, and “Worse than the flaming winning prizes!”

Despite this snub, I bear the broadcasting giant no ill will – Although, if they think I’ll ever watch The One Show again they’re sadly mistaken! 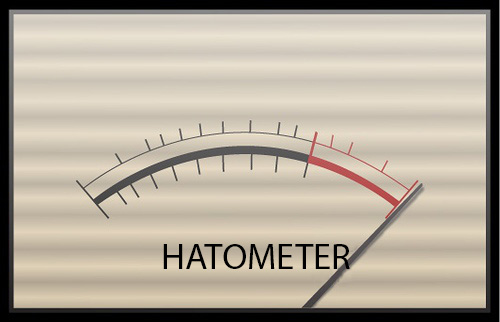