“I’ll give you a clue, he won the medal while riding a horse.”

Well-meaning words from the question master to myself and team mate. His attempt to assist our floundering efforts at answering his question “At what sport did Sweden’s Anders Garderud win a gold medal at the 1976 Montreal Olympic Games?”

It was the early hours of a morning circa 1990, five men sitting at a wooden dining table during a break from a gruelling nighshift. Their location a dimly lit company restaurant/canteen in Edgware, north London – The upcoming challenge – Two teams of two seeking to prevail in the board game A Question of Sport.

The fifth man, deeming his sporting knowledge voids too vast to effectively participate, volunteered his services by offering to furnish both teams with their respective questions…… Which is my very long-winded way of telling you he wanted to be question master as he knew absolutely chuff all about sport.

Anyhow myself and a shift colleague made up one of the two sides; our opponents two of our highly competitive workmates. Men whose determine to win extended as far as demanding drugs tests before and after participation in our ‘friendly’ game….. Bizarrely, even going as far as insisting the question master provided a urine sample. 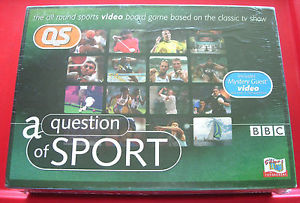 As only the question master (QM) failed the test, the game was allowed to proceed.

Our opponents win at all costs mantra also leading them to employ the unsettling tactics of insisting the questions were delivered in Greek. Bearing in mind the question master struggled speaking English fluently, not to mention he knew no Greek, it was a ludicrous notion. A further flaw in this demand being that, even if the QM could speak Greek, it would remain a futile tactic as none of the participants could.

Ten minutes pre-game were wasted before our challengers relented and agreed the game could proceed in our mother tongue. So with a background accompaniment of canteen lady Vera clattering utensils on the hot plate, the Question of Sport game began.

As expected, when all participants had reasonable sporting knowledge, it was a hard fought encounter. However, only one point behind our team, but with their ‘one minute round’ yet to be delivered, with the game’s conclusion beckoning it looked like our opponents would reign victorious.

For the uninitiated, the ‘one minute round’ is basically a challenge for your team to answer as many sporting questions in sixty seconds. A round that can yield numerous points for the sportingly knowledgeable.

My team mate and me had finished our round already, our challengers only requiring two points to sample victory. Consequently, it was hardly a surprise they looked smugly on as they awaited their 60 seconds of sports queries, a short time that would surely end with them prevailing over our team.

It didn’t quite go to plan, though, as the QM’s sporadic stammering affliction kicked in just as the ‘one minute round’ started. Consequently, much to their frustration, our challengers only receive one question during a time they’d expect five or six.

With the one question delivered being answered correctly, the game ended as a tie, necessitating a sudden death question for each team to unearth a winner. Our challengers received their query first, which they correctly answered. Leaving my team mate and me having to answer our next question to stay in the game.

“At what sport did Sweden’s Anders Garderud win a gold medal at the 1976 Montreal Olympic Games?” came the inquiry our Question of Sport lives depended upon.

My team mate and me looked at each other cluelessly, as if the QM had delivered it in Greek. Seeing we were struggling with the question, and much to our opponents chagrin, he then well-meaningly uttered:-

“I’ll give you a clue, he won the medal while riding horse.”

Floundering, we reeled off as many Olympic equestrian events as we could bring to mind. Each one receiving a firm “No!” from the QM.

After exhausting our equestrian event knowledge, we were forced to admit defeat, asking the question master to furnish us with the answer. After a brief pause, he responded:-