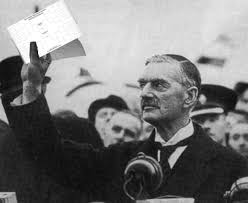 On this Day in 1938 the British Prime Minister Neville Chamberlain was lauded for bringing ‘peace to Europe’, after he announced he’d signed a non-aggression pact with Germany.

He had just returned to the UK after a conference in Munich, where the subject of Czechoslovakia’s Sudetenland was discussed with Germany, France and Italy. It was reported that Chamberlain found Hitler amiable, until he asked him if Groucho Marx can have his moustache back!

After that Hitler went into a huff and refused to continue their game of Connect Four together. The French and Italians placated the over sensitive Austrian born Fuhrer by agreeing to let him have Sudetenland and a Toffee Crisp.

Due to Hitler’s incursions, it was a time of great unease in Europe. Outside of Germany, there was great discomfort at the Fuhrer’s posturing, especially the stance with his hand on his hip, which France deemed as far too camp and unbecoming of a nations leader.

One of the stances the French had a problem with! 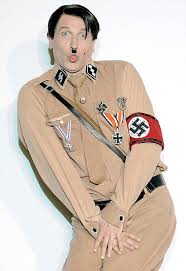 However, following this accord in Munich there was renewed hope that Hitler’s intentions were non aggressive. If the agreement would have taken place now Chamberlain would no doubt have added him as a friend on Facebook and Bavarian blogging account.

I doubt they’d be best buddies and if Chamberlain would allow him access to tag him in posts, or see his family photos. But friends nevertheless!

As he stood on the steps of his returning plane at Heston airport, Chamberlain proudly held aloft a piece of paper, signed by Herr Hitler, on which he claimed peace in Europe had been guaranteed. Unfortunately, he’d picked up the wrong piece of paper in Hitler’s office. This resulted in him reading out the contents of another note to a stunned London crowd, who’d gathered for his return.

This throng of people, who had assembled to hear about peace in Europe, were somewhat perturbed when their Prime Minister read out that the German Fuhrer had promised “Eggs, milk, bread, strudel, vegemite, cheese, sausage.”

Chamberlain was embarrassed at returning with the German leader’s shopping list, instead of the signed peace agreement. He abruptly left the scene to request the correct document be sent by his new teutonic chum. The massed London crowd were left stunned! Not just at the lack of information about a peace agreement but also by the fact Hitler liked vegemite!

A shopping list similar to Hitler’s, Although his didn’t have little pictures beside each item!

The correct piece of paper was forwarded by Germany a few days later, after Chamberlain agreed not to disclose any further dietary choices of their Fuhrer.

As it turned out the shopping list turned out to be of more worth than the historic 1938 Munich peace agreement, as eleven months later Germany invaded Poland. This was the catalyst of WWII which, after almost six years of fighting by allied forces against Germany, led to over 50 million deaths and many more injuries.

Europe’s appeasement by letting Hitler have Sudetenland.in return for no further aggression had proved futile.

It was a terrible chapter in fairly recent history, where not just the horrors of war had to be contended with, but also attempted genocide during the Holocaust.

To close, I want to clarify the narrative of this blog is a light hearted jibe at the signing of a worthless peace agreement 76 years ago.

It is under no circumstances written to make light of WWII, the brave people who fought in it, civilian death/injury or the poor families who suffered loss of a loved one. I have the utmost respect for all of those individuals and wouldn’t trivialise what must have been a terrible era to live in. 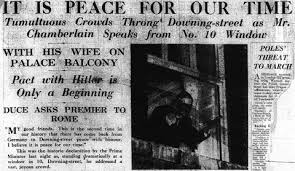 Today is not a day to celebrate, but to remember a day when the people of Europe thought they’d secured future peace, only to be cruelly let down a few months later!