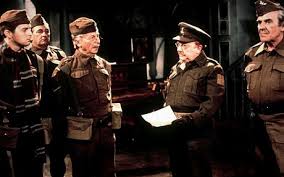 I see they are making a Dads Army movie that’s due for release in 2016. It has a star studded cast with Toby Jones, Bill Nighy, Bill Patterson and Morgan Freeman as Cpl Pike.

We are told it will pay homage to the sitcom from the 1970’s, featuring the much loved characters of Walmington-on-Sea’s Home Guard. They were the bumbling set of codgers who were our last line of defence should Hitler’s boys get as far as Blighty.

Thankfully, our teutonic opponents didn’t breach the defence in front of them as, in all probability, our geriatric defenders would have been about as effective as Liverpool’s defence were when they lost 6-1 at Stoke last season!

As most of the original cast are now no longer with us, some of the roles will be played by the actors named above. Apart from Morgan Freeman playing Pike, which was a complete lie………. That would be ridiculous! After all he is. currently filming for the Hi-De-Hi movie, playing camp comic Ted Bovis.

The Hi-De-Hi movie will be given a contemporary spin to bring it up to date, to reflect more accurately how people behave these days. So when Gladys Pugh gleefully greets the campers over the tannoy with “Hi-De-Hi! campers. It’s time for aqua aerobics at the Olympic size swimming pool” they don’t respond “Ho-De-Ho”. The miserable gets will shout back “F*** off, I’m on my iPhone!” 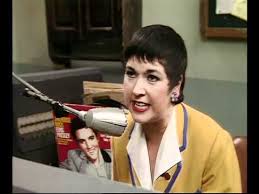 Dad’s Army holds a special place in my ‘Fond Memories’ cranial database. They were part of my life when I could sit and watch the TV unhindered, without someone saying “Dad, can I borrow a tenner for my taxi into town?” or “Gary, why are you wearing my nurses uniform?”

I often talk of things and memories being on the canvas of my life. I’m not sure whose signature is on the bottom of the canvas, or how it will finish. However, Dads Army would definitely be on there as something that brought pleasure in my youth.

Even though the David Croft and Jimmy Perry penned series is regularly repeated on TV, I haven’t seen it for years. If truth be known I’d probably not find it funny now and, despite a great cast, I’m not overly convinced the new film will be brilliant. However, I will definitely go to see it regardless of my negative expectations.

Even if I didn’t enjoy the movie it doesn’t matter! The point is it used to make me laugh and it contributed to the many things that made life so good at that time. Below is the trailer for the movie due out next year.

Anyway, talking of doddering old people who shout “Don’t panic”, I’m going to my mum and dad’s for Sunday lunch so I best get my backside in gear and get ready!