As I await the diminishing of it’s boiling water temperature to avoid scalding, my coffee house Americano with semi-skimmed milk currently sits tantalisingly in front of me. In desperate need of caffeine infusion, this wait undertaken with greater impatience than usual. An erratic overnight sleep resulting in a cranial numbness I’d imagine bears similarities to the stupefaction consequential of watching an episode of tabloid reality TV show Love Island.

As GJ Strachan’s neurological impulses stoically seek a topic epiphany, thus far without success, I remain staunch in my resolve at attaining the habitual daily goal of penning an essay of 500 words or more.

Late American writer Gore Vidal, a passionate exponent of imprinting typewriter ink onto paper, once whimsically advocated that an author suffering writer’s block should “Write something. Even if it’s just a suicide note.”

With experience of affliction by sporadic dark episodes, I’ve no intention of acting upon Vidal’s dramatic, although tongue-in-cheek, course of action. Even though chronicling such a dark piece of prose doesn’t necessitate a drastic suffix in its aftermath. However, journalling darkness on that plateau is a literary avenue I’m resolved to avoid.

Although Vidal’s adage wasn’t delivered seriously (I don’t think anyhow!), to my mind the subject of suicide isn’t one I want to embrace with levity; even if presenting the essay in the same well-meaning whimsical form of Gore Vidal. I’ve tarried within the domain of mental darkness for too many hours to make light of the topic. 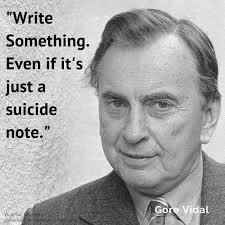 It always fascinates me when you read quotes from the more erudite writers of the last century. Men like Vidal, Bertrand Russell and Mark Twain’s advocations the philosophical, occasionally cynical, observations which although delivered over fifty years ago (some almost a century past) are as relevant in contemporary times as they were when first aired.

“The genius of our ruling class is that it has kept a majority of the people from ever questioning the inequity of a system where most people drudge along, paying heavy taxes for which they get nothing in return”. – Gore Vidal

“The fundamental cause of the trouble is that in the modern world the stupid are cocksure while the intelligent are full of doubt.” ― Bertrand Russell

Only one example each from many thought-provoking promulgations delivered by the three acclaimed writers during their pomp, which still ring true in 2020. To my capricious mind, a sad indictment proving the proletariat never learn from history. Circumstances bringing to mind the following verse from The Jam’s songwriter Paul Weller’s song Pretty Green:-

With no viable global social movement that can get close to challenging capitalism, I don’t pin my colours onto the mast of any political party….. To my mind, there’s absolutely no point!

The fact the Tories annihilated the Labour Party in last months UK General Election, despite the Brexit fiasco and certain high ranked MP’s odious arrogance (underpinned with realisation they’d no viable opposition), tells you all you need to know about the current state of socialism.

I’m not sure why I’ve ended up wittering about politics, a topic I ordinarily despise embracing and consequently avoid like the plague…… Perhaps I should’ve followed Gore Vidal’s writers block advice after all!