Yesterday, I was saddened to hear about the passing of Australian writer/broadcaster Clive James. A man whose erudite and witty essays in his book ‘Unreliable Memories‘, like Woody Allen’s comedic tomes in ‘Without Feathers‘ and numerous whimsical Les Dawson monologues, were catalysts for my dabbling in the domaine de l’écriture humoristique.

James’ Sunday evening broadcasts on ITV were also a great favourite of mine in the 1980’s. His dry and acerbic wit somehow cushioning the blow a moribund weekend was expiring, and I’d an early start at work the next morning.

His show Clive James on TV frequently providing humorous talking points, submissions providing plenty of material for discussion on arrival at work the following day. His airing of eccentric and idiosyncratic VT clips from throughout the globe, along with his jocular commentary always good value. 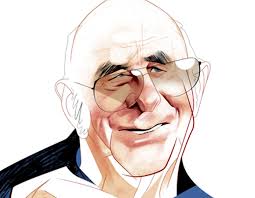 Amongst the regular Monday morning talking points at work Clive’s habitual joshing at the expense of a Japanese gameshow titled Endurance. These clips showing a deluge of cruel acts which contestants had to survive if they’d aspirations of vanquishing their opponents.

The sadistic gameshow included malevolent challenges like, in sub-zero temperatures, competitors being plied with pints of cold beer whilst dressed only in their underpants. The winner of this particular piece of cruelty the contestant the last to urinate in a nearby river. A severe, merciless test for even the most stoic of bladders.

As this action played out, I can’t speak for Clive James’ studio audience who seemed top lap up such torture, I’d always mull over what kind of idiot volunteers to put themselves through such physical and mental torment for the entertainment of others?!….. I’m unable to recall the ‘trophy’ ultimately bestowed on Endurance’s winning contestant. However, I don’t envisage it’d have compensated for the sadistic trial they’d volunteered*** to undertake.

*** – I’m assuming the contestants did volunteer for the show. And that ‘guests’ weren’t hapless victims of the programmes production team cruising Tokyo bars seeking to press-gang unwilling competitors.

The 30+ years since last witnessing Clive James on TV have severely diminished recollections of the Sunday night’s broadcast content. The only other clip I recollect was taken from a Scandinavian TV show – This comedic but distasteful piece of VT showing a Danish band named Shu-bi-dua singing a less than fragrant (in more ways than one) refrain titled ‘There’s A Dog S**t In My Garden’.

This ditty leaving such an impact on my immature mind I can still recollect the lyrics of its inaugural verse. Who says I never remember anything worthwhile?!….. From memory the ‘erudite’ and ‘moving’ prose went as follows:-

‘There is a dog**t in my garden and when I cut my grass, the dogs**t is no longer in my garden. It is a-sittin on my footsole, it smells a doggies ass – And that is not the smell of Elizabeth Arden’……….

I’m unaware who penned this asinine musical sonnet. However, I’d be surprised if the lyrics came from the quill of Cole Porter, George & Ira Gershwin, Irving Berlin or Richard Rodgers. The Great American Songbook lyricists appearing to usurp counterparts from The Great Danish Songbook when it comes to showcasing the quality of their art.

Despite introducing me to the repugnant Shui-bi-dua refrain, it was with a heavy heart I read of Clive James’ death. A great raconteur, wit and broadcaster, he was a bit of a hero of mine on the old QT.

RIP Clive James – Thanks for the laughs, inspiration and confirming that when it came to gameshow format’s the Japanese were/are chuffing mental!!