There were numerous great experiences which enhanced yours truly’s life during my Canadian adventure. Amongst them the warmth of the individuals I deem blessed to become acquainted with; not to mention my serendipity at being given an opportunity to witness some truly enchanting scenery.

Since my return it also dawned on me, on becoming reacquainted with British TV, how splendid it was not to hear one mention of Brexit for the last fortnight while I was away. The reality show where for the last three and a bit years a dysfunctional cast in the Big Brother Houses of Parliament have behaved in a manner indicating Britains future interests are in anything but safe hands.

This Pandora’s Box of odious and uninspiring Members of Parliament (MP’s) from both sides of the political divide unleashed onto the British populous by an equally obnoxious  small group of xenophobes. A seemingly uninformed collective who voted for major political change through little more than spite, with little thought as to how their actions at the ballot box would impact the British Isles they claim to unequivocally adore.

At the time of the 2016 referendum I’d no strong opinion either way about Brexit. I was resolved though not to vote to change the political status quo for a simple reason no one, not even campaign leaders, were able to illicit what that strategy would achieve.

How the hell can you nail your colours to the mast of a change when people pimping out the notion are utterly clueless as to any tangible result of that action??!!….. An utterly nonsensical sales position.

However, throw in a ‘get rid of the Johnny Foreigner’ gambit and in a tight vote you can get enough backing to cross the line. A proportion of these people recklessly gambling with Britain’s economic and social futures for no other motive than ensure EU migrants are no longer welcome on our sceptres isles.

In their misguided minds a move ensuring, bereft of the non-British, they’ll live happily ever after on an utopian island where everyone lives in peace and harmony. Just like people did prior to the mass immigration to our islands following WWII!!!…… That’s bound to happen isn’t it!!

Fundamentally, a world without conflict is unattainable. Without European migrants allegedly tainting their beloved isles, Britons would seek alternative scapegoats, predominantly in the shape of other minorities. An act to mask their own shortcomings while attempting to gain a semblance of reconciliation for disenchantment at their turgid existences.

Ingrained in our DNA, like all members of the animal kingdom, survival at all costs is the name of the game. A contest which in some cases is played by participants with less salubrious terms of engagement than deemed as acceptable by the majority.

Consequently, in the absence of Mr & Mrs Foreigner, someone else will acquire the target which formally adorned their backs. It’s human nature and whether the UK embraces a policy of multiculturalism, or a total ban on immigrants, conflict between various British ‘tribes’ will still exist.

Ordinarily I loathe including political comment of any sort in essay; instead preferring to indulge in penmanship of a more whimsical nature. However, with the 31st October deadline for the UK to leave the European Union (EU) fast approaching and despairing of our nations shambolic behaviour whilst attempting to gain liberty from that union, I felt moved to embark on a mini rant on the topic.

There are so many disturbing things about proceeding in the three years since Article 51 was invoked by the UK government, following Britons democratically voted to leave the EU. Among them the odious MPs who’ve been ‘unearthed’, like corpses in the Michael Jackson Thriller video, into key government roles during this fiasco. Jacob Rees-Mogg, Michael Gove and Boris Johnson take your bow.

I think the biggest concern to me, though, is that fundamentally we’ve only gone through this shambles because the small leave majority was gained by a section of misguided xenophobes whose dream was thatof an immigrant free nation. A position which, seemingly unbeknown to them, is utterly unattainable. 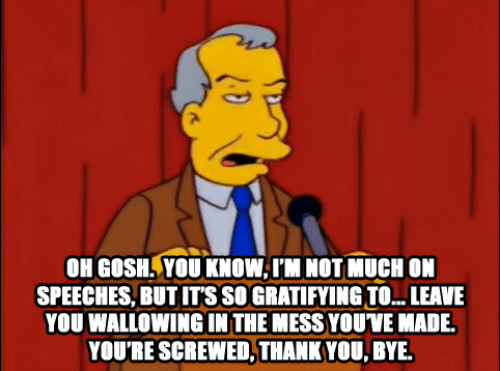 I respect everyones right to use the ballot box to fulfil political wishes. However I’d venture if on 23rd June 2016 (referendum day) leave voters would’ve had the foresight to see how things would pan out in the next three years that minor victory would’ve changed into a large defeat.

I’ve still no strong opinion either way as to whether Britain should or shouldn’t leave the EU. If the public had’ve gone into the referendum with even the smallest semblance of an idea of the consequences of leaving the EU then at least you’d be stood at the ballot box from an informed position.  Subsequently, I’d have place greater store in their decision making process.

However, to my mind, voting for a change when you (or indeed even the Brexit campaigners) had no idea of its consequences was tantamount to political Russian roulette…….. I can’t help feeling we’re reaping what we sowed!!