June has taken the month baton from May. A seamless exchange that’ll no doubt see the fifth calendar month’s relief at being able to escape from the Brexit nonsense, indifferent weather and global trade uncertainty which tarnished its tenure.

“May has gone!”……. A cry not only heard this week from a Gregorian calendar perspective, but also recently when UK Prime Minister (PM) Theresa May confirmed she’d leave her post on 7th June. An announcement I assume means the post she’s leaving is that of PM; not that next Friday she doesn’t intend to pick her mail up from the Post Office…… For completeness, I best check that!

On that date Theresa May will no doubt breathe a huge sigh of relief when unceremoniously hurling the poisoned chalice of Brexit to her replacement, akin to a fly half passing a rugby ball to his speedy winger.

In the Gregorian calendar May is perennially replaced by June. Within the power fused corridors of the Houses of Parliament, May will be succeeded by a Boris, a Jeremy, an Esther or one of another nine uninspiring ladies or gentlemen. Twelve Members of the UK’s Parliament clambering for possession of their nations top political post, along with ownership of Downing Street cat Larry.

Sadly, Larry isn’t interested at throwing his hat into the ring to challenge for the PM’s job. From a personal point of view I’d rather have him leading the government, with Boris Johnson become Chief Mouser to the Cabinet Office….. But, as the blonde haired ex-Foreign Secretary would no doubt posit, “What do you know, Strachan?!…… Take your GCE ‘O’ level in cynicism and never darken my door again!…… Incidentally, can I borrow your Carpenters Greatest Hits cd, Gary?”

At the end of the day, irrespective of who becomes Prime Minister, Brexit negotiations will remain shambolic, and the final agreement will no doubt see the shafting of the UK from a trade and economy perspective. The resulting harsh economic squeeze potentially seeing a significant increase in the cost of Tabby Chunks, Larry’s favourite moggy meal. 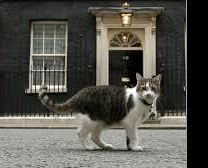 Apparently, Larry remained unmoved when asked by the Tory backbench 1922 Committee to reconsider running in the race for PM. His response the symbolic coughing up of a fur ball, followed by escape at speed through the front door of number 10 Downing Street.

Even cajoling words from his supporters, pointing out he’d create history by being the first Prime Minister capable of cleaning their own testicles with his tongue, failed to persuade the unassuming feline his destiny lay at the Despatch Box. Larry remaining unmoved by his ordinarily persuasive chums; evidently, happy with his lot of a regular Tabby Chunks feed and a daily visit to the litter tray.

How will political commentators record Theresa May’s three years at the helm? How will the stewardship of the only Tory female British Prime Minister not to close a coal mine**** during her tenure be chronicled by historians?

**** – Although as there weren’t any left to close, it’s probably unfair to compare her record at decimating British pits against Margaret Thatcher’s devastating the industry.

Will May be remembered as the inept leader behind the Brexit negotiation shambles? Or will the Eastbourne born MP receive a more empathetic epitaph?

Political historians positing she was on a hiding to nothing the moment she succeeded David Cameron, who resigned after backing the losing horse in the EU membership referendum.

Regardless of how her legacy pans out, May has gone. I’ve not really been interested enough to research why, like Larry when asked to compete for the PM role, she’s heading towards the door of number 10. I’d suspect, though, MP subterfuge on both sides of the House of Commons to be a contributing factor.

A holiday of lost luggage, whinging at the rubbish rate of the pound against the Euro, delays due to French air traffic controllers and the unwanted attentions of barman Pedro at the Citadel nightclub.

Whatever that next step is for Mrs M, one comforting though for her is it’s got to be more enjoyable than the detritus she’s contended with during her tenure.