In my attempts to dodge situations adding strain on my still recovering cardio system I’m currently striving to avoid TV news bulletins. An approach purposely taken to evade the journalistic millstones capable of dragging even the most positive individuals (of which I’m not one) into a pit of despair.

Stories that transport you from the sanitised world of TV quiz shows Pointless or The Chase, aired just prior to the bulletins, into an underworld akin to a latter day Dante’s Inferno.

Inferno the first part of Dante Aligheiri’s 14th century epic poem Divine Comedy; prose in which the author narrates his interpretation of hell. A bleak vision of the underworld represented by nine concentric circles of torment, made up of Limbo, Lust, Gluttony, Greed, Anger, Heresy, Violence, Fraud, Treachery.

Plateaus of torment through which Dante and his poet guide Virgil travel on an odyssey highlighting the recognition and subsequent rejection of sin. Dante’s locutions painting hell as ‘A realm of those who have rejected spiritual values by yielding to bestial appetites or violence, or by perverting their human intellect to fraud or malice against their fellowmen’.

Today, when thinking of current day news bulletins, the Italian writer’s 14th century depiction of hell sprung to mind. Random notions of how in contemporary times Dante, should he be alive today, would perhaps journal 21st century events within those nine rings of hell.

Personally, I believe the very same categories could be seamlessly incorporated into today’s less salubrious current news stories. After all, there’s always a place in the underground world to consign disenchanting broadcasts whose awfulness leads us to question the very sanity, humanity and decency of the human race.

With this in mind, I’ve included a few ideas on how and where 21st century news reports could snugly fit within a 14th century writer’s idea of hell.

Limbo – Well I guess there’s two easily identifiable topical stories that fit within the limbo circle.  Firstly in the shape of Brexit uncertainty which currently divides the UK government; and it’s populous. Secondly with the budget impasse causing the US government shutdown.

Lust – Could be represented by fairly regular broadcasting of news stories regarding the global #metoo campaign and criminal trials of gangs grooming under-age girls.

Gluttony – The journaling of widespread disparities of global food/water availability and inadequate shelter. Not to mention regular items on the obscene amount of perfectly edible food disposed of every day while millions starve.

Anger – An emotion that serves little positive purpose. Although I have to admit it’s one increasingly experienced by yours truly as mine and my family’s existential misfortunes continue apace. From a contemporary news perspective, this fifth ring of the underground is represented by numerous global conflicts responsible for mass human slaughter. Not to mention the world’s disenfranchised and oppressed.

Heresy – The sixth ring encompasses the many who attract column inches with their evil acts undertaken in complete contradiction to what their religion, faith or ideology advocates.

Violence – The news reporting of a growing number of stabbings and gang related violence in the UK just a small representation of this particular circle of hell. See also ring five (Anger).

Treachery – See all of the above!

This narrative is not written from any particular political, religious or ideological viewpoint – As such, I’ve intentionally kept my observations vague and impartial.

The purpose of the prose is to challenge myself at updating a classic 14th century piece of literature, complete with a current day spin. It’s not an misguided attempt to rabble rouse, tree hug, sit as judge and jury or pontificate. Something I’m unqualified to undertake,

In truth, the concentric rings alluded to in Dante’s Inferno aren’t only relevant to human behaviour in the 14th and 21st century. Those flaws of which the Italian wrote have, in varying degrees, dogged humanity since time immemorial and most likely always will.

My disenchantment at this fact while under doctors orders to avoid stress the reason I endeavour to avoid TV news bulletins at all costs. 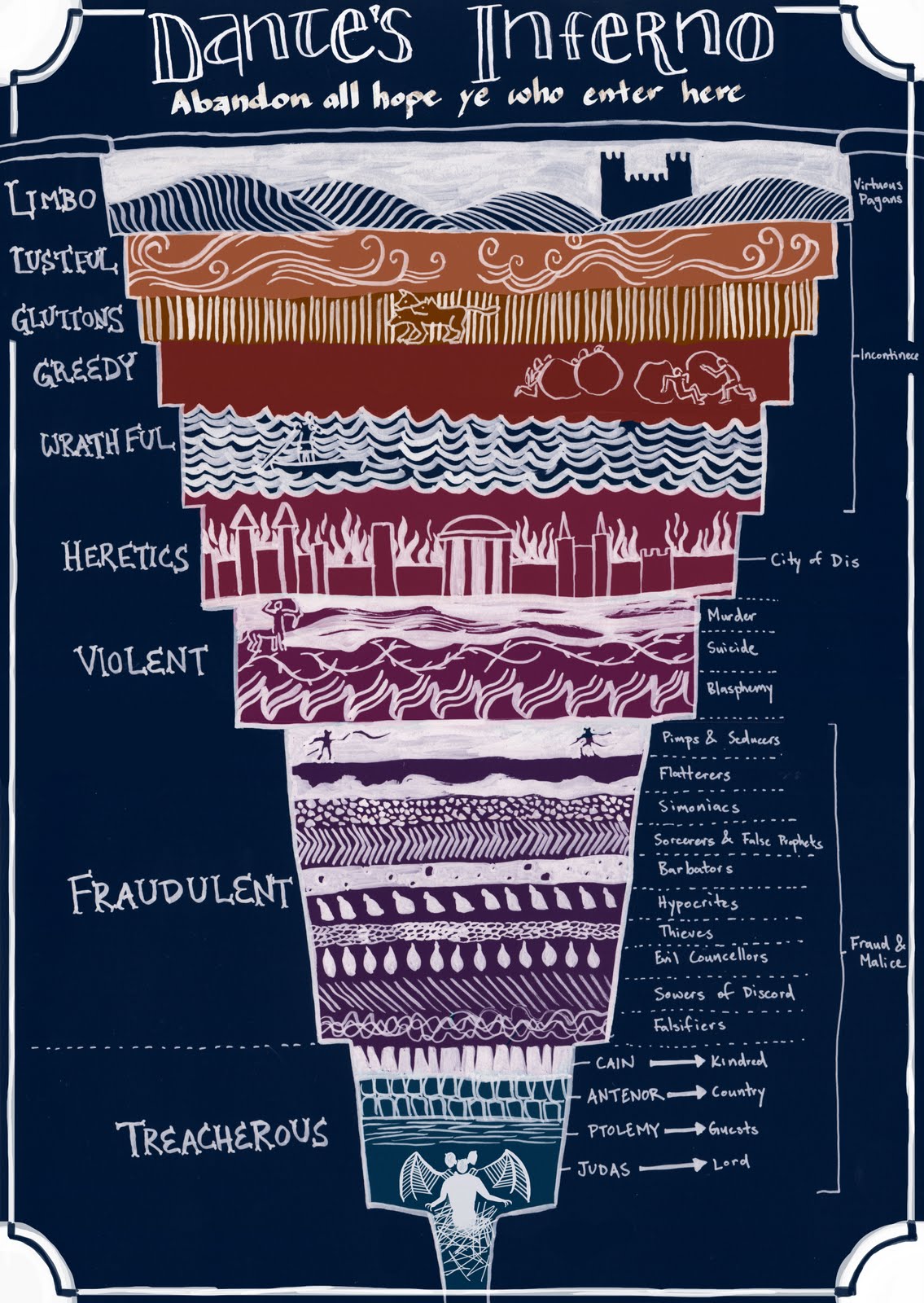