Yesterday, with the blindingly low autumn sun necessitating a salute-like shielding of my eyes, I sat Elland Road Stadium in situ with my son Jonny. Our two East Stand seats the exact same ones we secured as season tickets during his childhood.

With my now twenty-something son being only 12 years old last time we sat in these pews, the paucity of legroom for adults surprised him. Last time we parked our backsides on these particular seats my offspring was small enough for me to throw in the air if/when Leeds United scored a goal. An idiotic trait of mine that contributed to my chronic sciatica at the time, not to mention bringing Jonny out in a rash every time Mark Viduka entered an opponents penalty area.

Now taller than me, yesterday while walking to the ground from my parking space, my affable son joked he’d return the ‘favour’ and throw me in the air should we witness the home side score. 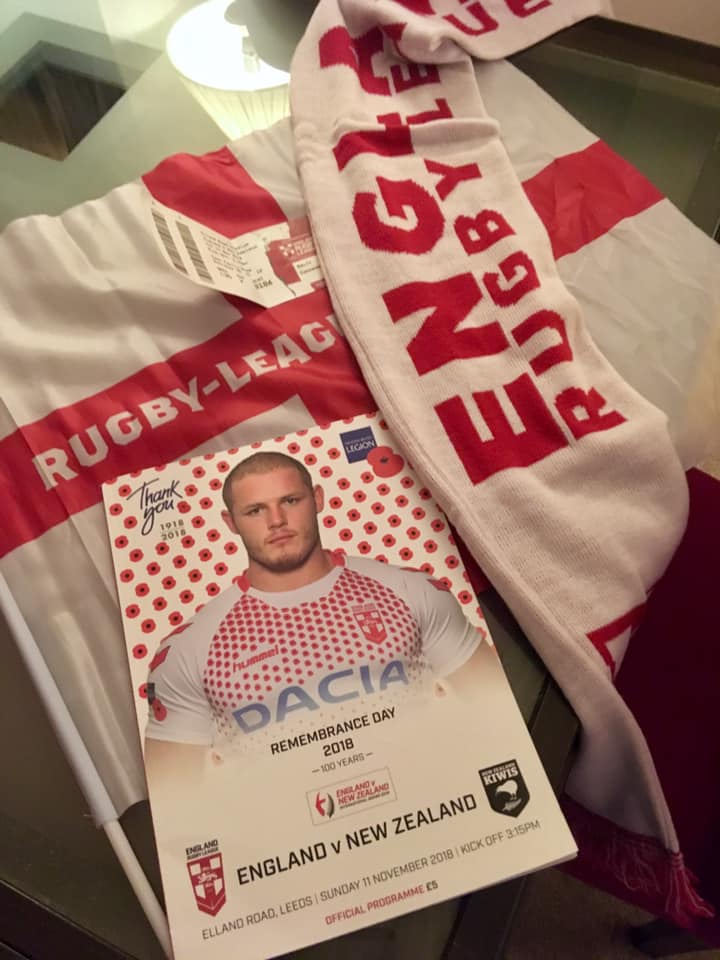 Elland Road home of Leeds United football club (LUFC); a place I’ve visited hundreds of times since September 1970 – The occasion my dad first took me to worship at this 38,000 seater sporting chapel at the foot of Beeston hill.

Yesterday afternoon, though, my venture to LS11 wasn’t to cheer on LUFC, moreover offering support to a completely different set of warriors clad in all-white. These new sporting idols our rugby league national team (England).

Rugby league, the pastime predominantly partaken in the UK by teams residing along the length of the M62 corridor. Stereotypically, players of working class northern English origins, products of a comprehensive education and playground brawls. Unlike participants in the rugby union code. Lads typecast as old school tie and crest clad, born into privilege and exponents of an altogether better class of schoolyard scrap.

Yesterday, England rugby league side took on the New Zealand. Dressed in all-black kit like their rugby union compatriots, the Kiwis treated the crowd to a pre-match haka akin to that of the 15-a-side game. A traditional South Pacific war dance packed with cacophonous grunts and intimidatory hissing.

Sounds leading me, at it’s conclusion, to mutter to my son “That reminds me, I need to get some Ex-Lax on the way home!”……. Saying that, though, if I’d have been stood as close to the New Zealand player’s intimidating war dance as the England lads I wouldn’t have needed Ex-Lax to eradicate my chronic constipation.

England went into the concluding game of the tri-match series with an unassailable 2-0 lead. The pre-match aim of captain James Graham’s team a series whitewash against an accomplished side who, despite not being top side in their sport (like their rugby union compatriots), only narrowly lost the first two encounters.

On the commencement of the match, LUFC’s green and pleasant stadium turf saw the wounded animals*** dressed predominantly in black destroy England 34-0. At the final whistle it was galling we’d lost so badly, but on the plus side with the team in white ending pointless at least my son didn’t get the opportunity to throw me into the air!

*** – They sounded wounded during the haka anyhow!

At the conclusion of the game, as Jonny and I walking from the ground I overheard a fan tell his mate the score could have been 48-0 such was the Kiwis dominance. “It could of been……” a comment often expelled from the mouths of sporting fans and pundits. One, though, which I’ve always found a bit pointless.

As my lad and I walked up Lowfields Road towards my parking spot on Gelderd Road a couple of hundred yards away, it struck me today wasn’t the first time I’d left Elland Road after watching my all-white kitted team get hammered.

Although, I’ve never seen LUFC lose 34-0….. That being said, though, when we had Paul Rachubka in goal a few years back I wouldn’t have bet against it!