After all my recent words conveying an indifference about the ongoing football World Cup in Russia I got into the spirit a tad yesterday evening. Watching the England v Colombia on TV I experienced a rare episode of football sourced euphoria.

Don’t get me wrong this lack of enthusiasm is a fairly recent emotion for yours truly. A sensibility I put down to an amalgam of middle-age cynicism, along with despair at the antics of (in my opinion) overpaid cheating footballers. Football is a game I’ve loved playing and watching for many decades until the last few years.

I was joined watching the match in my garden by buddy Mike and his son Sam. They were slightly late to their seats (patio chairs) due to an over officious steward (my wife Karen)  insisting on security searching their bags prior to allowing access to the stadium (our home).

Initially, after finding the bags didn’t have a box of chocolates or bottle of rose for her, she refused entry. It took my intervention of persuading her chocolates and rose aren’t everything and, as long as one of the bags contained beer, to allow access.

13 year old Sam luckily had four bottles of Becks*** so the stewarding faux pas was amicably resolved. Strangely, Mike didn’t have anything in his bag apart from his magicians set. This leading me to pray he wasn’t going to saw Sam in half during the game, as he did when we watched England v Iceland in Euro 2016.

*** On the off-chance Sam’s mum Claire is reading this, don’t worry it was Mike and I who quaffed the Becks.

Mike’s sorcery is often top notch entertainment. However, during a tense stage of a World Cup game involving your home country the last thing you need is for someone to parade a pack of cards in front of you, urging you to pick one.

Or indeed experiencing a white dove, that seconds earlier had been an egg, flying in your face just as England captain Harry Kane is about to take a penalty. 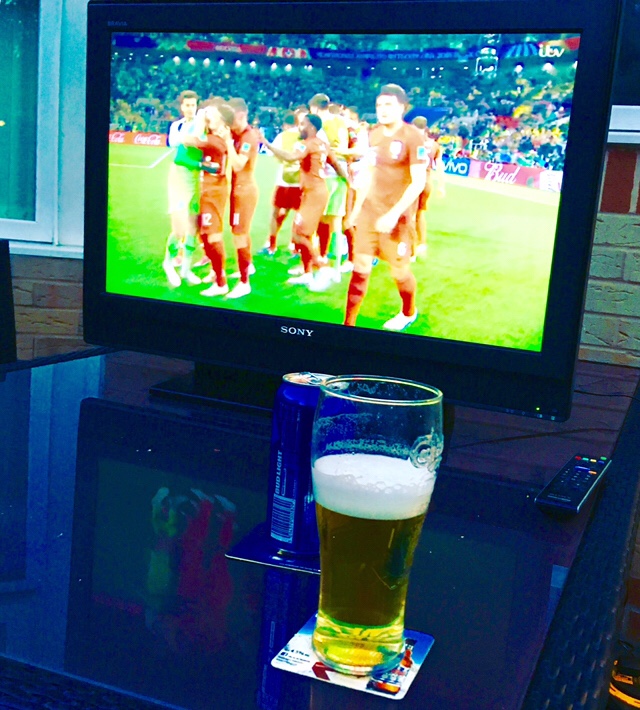 There is no malice in my mate’s wizardry, just a misguided belief escaping from a glass box while shackled in chains is an acceptable distraction during tenser incidents of our national game.

Thankfully, he kept the magic to a minimum yesterday evening – The only heads put into lion’s mouths being metaphorical, ie the Colombians against the vanquishing side with three lions on their crest.

It was a relief that apart from the card trick and turning an egg into a white dove, Mike let us concentrate on the match being played out on the outdoors TV.

He did attempt to gain kudos at allegedly using black magic to assist England goalkeeper Jordan Pickford’s decisive penalty save in the shootout. However, I’m sceptical uttering “Issy wissy lets get busy’ in conjunction with waving a magic wand somehow contributed England’s progression into the last eight of the tournament……. I think my chum needs to perhaps address the number of hours he spends viewing his Sooty boxsets.

When Eric Dier’s penalty buried itself in the bottom left corner to signify an England victory, Mike, Sam and me jumped from our seats in celebration. A response that led to my buddies rabbit filled top hat vacating his head, along with four decks of playing cards scattering from the bottom of his hoodie sleeves.

Following the post match interviews and analysis on TV, Mike and Sam ventured home (next door) in a taxi……. The lazy gets.

On my guests departure I ventured back outside to tidy up. The chore included picking up four decks of scattered playing cards, along with stopping Mike’s escaped rabbits dining on my azaleas.