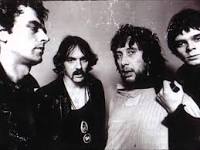 In the first three lines of their song No More Heroes the 1970’s punk band The Stranglers ask the rhetorical question:-

Whatever happened to Leon Trotsky?

He got an ice pick.

That made his ears burn.

The reason this song came to mind today was that on this day in 1940 Trotsky received the fatal ice pick wound alluded to by Hugh Cornwell and his band in the song lyric. 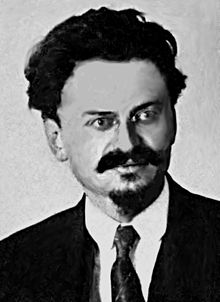 The incident took place in Mexico City when the Ukrainian born revolutionary was attacked by Ramon Mercarder with the aforementioned weapon.

Mercarder was a Spanish communist, who gained the trust of Trotsky and his family after telling Trotsky’s spouse “They’re nice shoes Mrs Trotsky! Are they from Pavers?” They were all taken in by this affable comment and they welcomed him into their family bosom with open arms!

However, it turned out Mercarder was a wolf in sheep’s clothing. He wore sheep’s clothing as he found them cheaper and more comfortable than those designed for a wolf! I’m not sure if you can class it as cross dressing, however, he sounds a right chuffing weirdo!

No one knows definitively why he took Trotsky’s life. Some speculate it was after Trotsky made disparaging comments about his sheepskin waistcoat. Others say he was working as a Stalinist agent contracted to kill Trotsky after a dispute between the two. There are some say he was told to do it by his hair stylist Guido!

Ramon Mercader in a rare photo where he’s not wearing sheep’s clothing! ……… and his hair stylist Guido 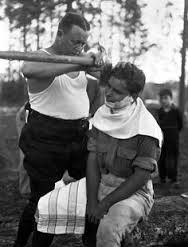 Mexican authorities set up their version of the US’s Warren Commission (who investigated the JFK assassination) to investigate this murder. They concluded that Mercarder acted alone. This was despite compelling eye witness reports of men acting suspiciously with an ice pick behind the picket fence close to where Trotsky’s attack took place.

Was Mercarder a patsy?! Who knows? Who cares? Whose cat it that dumping in my garden?!!

If he did do it one thing is clear about his motives for this murder. They were none of the above, apart from possibly him being an agent acting on Stalin’s orders.

Trotsky had fallen out with Stalin on the grounds that the bureaucratic structure of the Soviet State impeded worker control and the true revolutionary dictatorship of the proletariat. He also criticized the methods of what he saw as a totalitarian regime suppressing dissent in the pursuit of ideological goals. Trotsky felt this perverted rather than upheld the work of Marx and Lenin…………… He was also furious that his moustachioed leader had damaged the Alexander Borodin record he’d lent him!

Likewise, Stalin disliked Trotsky on the grounds of Spartak Moscow and FC Zenit St Petersburg.. To be fair to the Soviet State leader, it was Trotsky’s own fault for forgetting Stalin’s half time Bovril on both occasions!

I have titled this blog No More Heroes Anymore. This is to reflect Trotsky’s mention in the punk song I alluded to above. It is not to say he was my hero or I share his ideology, because I don’t!

In No More Heroes Anymore, The Stranglers also questioned :-

Whatever happened to dear old Lenny?

Im not sure lads, but if you ‘Ask Jeeves’ I’m sure he’ll oblige.