Comedian, entertainer and failed moustache grower Groucho Marx died on this day in 1977. Coincidentally, a man who did almost as much for the cigar marketing industry, ex US President Bill Clinton, is 69 today!

Born Julius Henry Marx, Groucho was famous for his eccentric walk, cigar, grease paint moustache and the fact he had brothers with curly hair. Well, apart from Zeppo who was the only one of the Marx brothers who looked normal in their movies, although his hair was a bit wavy. 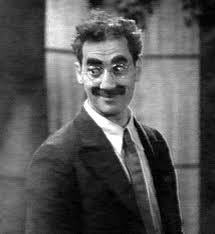 Not that having curly hair makes you look abnormal. Curly hair is great, in fact some of my best friends have ringlets! My brother’s partner Anne and Billy from Hetton both have wavy hair. I also have a friend who hasn’t got spiralling locks but he is nicknamed Curly! So what further proof do you curly tops need that I love curls? I’ve no bloody idea where I’m going with this paragraph!

Anyway, I think before I got sidetracked I was attempting to say that Groucho, Chico and Harpo Marx all dressed up in a comedic old fashioned way. However, Zeppo dressed more conventionally which made him look more serious, well apart from having a big nose.

Not that having a big nose is a bad thing. In fact some of my best friends have big noses. In fact I have a protruding conk………… For f***’s sake get on with it Gary!

The Marx brothers. From left to right: Chico, Groucho, Harpo & Zeppo. See what I mean about his hooter! 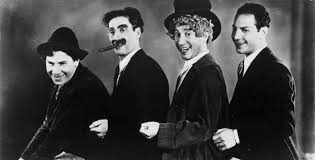 Groucho’s quick fire delivery, his humorous suggestive jokes, insults (many apparently ad libbed) and the fact he hadn’t slept with a horse gained him many admirers and imitators!

He and his curly wig wearing brothers Chico and Harpo made thirteen movies together. He was the ubiquitous funny one who generally teased the straight characters and his brothers with innuendo and insulting patter.

When I say the straight characters I don’t mean the others were gay! Even if they were gay, that is nothing to do with me. Plus it meant something different when they made movies anyway! In those days (1930’s & 1940’s) gay meant being happy, cheerful and without abandon. It didn’t mean that you liked touching someone of the same sex’s bottom!

Zeppo worked in the first five Marx brothers films but quit after that for a career in entertainment and to rent his nose out for office space! That is meant as a joke by the way and not to be disparaging in anyway, as I loved the Marx brothers movies.

After the Marx brothers movies ceased, Groucho had a successful solo career most notably hosting You Bet Your Life on radio and TV. He wrote several books including Groucho and Me, Memoirs of a Mangy Lover and The Groucho Letters (1967). He donated his letters to the Library of Congress, along with his grease paint moustache and influenza.

He also wrote Where The F***’s My Pen?! However, that took a little longer to write than the others for some reason!

If it were possible to ask Groucho now what was his legacy is he’d probably say “It is the thing attached to my footacy!” Seriously, though, his style of humour is said to have inspired many great writers, actors, comedians and little Barry Nerfheusen from Leith, who was unable to grow a moustache so he copied Groucho’s grease paint substitute.

Groucho was hospitalized at Cedars Sinai Medical Center with pneumonia on June 22nd, 1977 and died at the age of 86 on August 19th

Composer and lyricist Irving Berlin once quipped, “The world would not be in such a snarl, had Marx been Groucho instead of Karl”.

I’m bringing this blog to a close in the knowledge that my small tribute to a legendary entertainer doesn’t do justice to his greatness. However, on the anniversary of his death I just wanted to write a few words in homage of Julius Henry Marx! …………. Oh Happy Birthday as well Bill! ………. And make sure you wash that celebratory cigar before you smoke it! 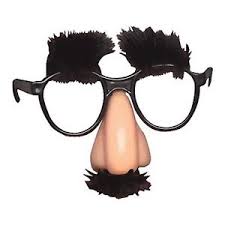