Skip to content
By Gary StrachanJuly 2, 2018Blogs family fiction humour2 Comments on Who’s Been Sitting In My Freezer?

It’s 09:42 on Monday 2nd July, the gauge incorporated within my garden clock currently advertises the temperature in my horticultural sun trap as in excess of 50 degrees Celsius.

It won’t be anywhere near that heat, however the solar rays are searing enough to, for the first time in my life, wish I owned one of those ridiculous looking caps with a hand fan in it’s peak. Hopefully, the time element of the garden clock is more accurate. If not, it might not be 09:42 on Monday 2nd July.

Actually it isn’t now as it’s indicating the time is 09:52. Blimey, it took me ten minutes to write those two small opening paragraphs. Sort out that procrastinating, Strachan!

Regardless of what the correct outdoor temperature is, I can categorically state that the ambient heat is searing. Even sitting as I am under a parasol at my patio table, I feel uncomfortably warm. Which along with the flies and spiders attempting to gain access to my lugholes manifest a sense of irritability.

Akin to many residences in the UK, we don’t have air conditioning. I’ve a fridge which I could try fit in; but to enable that I’d have to sacrifice having perishable food, beer or sauvignon blanc at a chilled temperature. Consequently, I’ll not be going indoors attempting to cool myself in the appliance where the cooked meats, cheese and salad ordinarily reside.

The glass of tap water beside me on the patio table is warm to the palate, making it less refreshing. My wife Karen recently queried why I didn’t cool it with ice from the freezer. Sadly, I’m unable to employ my spouses suggestion as it all melted yesterday when a nosey neighbour decided a decent strategy to acquire gossip would be to hide in our freezer.

An inadequately thought out plan that was soon apparent to Karen and me when the contents of the freezer laid on the garage floor (where the appliance resides).

Upon seeing all of her food defrosting in the heat my wife ventured outside to where I was basking in the afternoon sun to announce. “I think Shirley (fictional name of neighbour) is hiding in the freezer again!”

“Are you sure?” I queried, after sighing in annoyance at the serenity of my solitude’s departure.

“Why else would all the contents and shelves be dumped beside the freezer?” my spouse justifiably argued.

“Well have you looked in the freezer to check if she’s in there?” I irritably enquired.

“Why not?” I sought to clarify. At the same time wondering why I’d been involved in this..

“Errrr…. I don’t want to embarrass Shirley if she is in there.” the missus continued sheepishly.

“Well if she is hiding in our freezer seeking gossip, not to mention defrosting it’s contents, she bloody needs embarrassing.” I proffered frustratingly.

“How’s hiding in one of our kitchen appliances with a view to learn our personal business meaning well?” I spluttered in disbelief.

“I just don’t want to upset her, Gary.” the wee Durham lass countered.

“I’m not dealing with it, Karen….. You don’t have to be rude to Shirley, just tell her you’re disappointed at her clandestine antics.” I attempted to guide my other half.

“She probably won’t know what clandestine means.” my wife continued in her attempts to deflect this task to me.

“It doesn’t matter if she doesn’t understand what clandestine means!……. The fact you use the word disappointed should be suffice to express your displeasure at her actions.” I blustered, growing ever irritated at what I saw as my unnecessary involvement in this situation.

“Will you not do it, Gary?” Karen semi-pleaded.

“No, you need to come out of your comfort zone and take responsibility…. I’m not doing it.” I re-affirmed. With that Karen turned toward the backdoor, wandered through the kitchen into our garage.

Through the open door, I watched as my spouse tentatively opened the freezer door. Once ajar I then heard her Geordie tones utter “Oh hi, Shirley…. Would you like a cup of tea?…. You must be freezing sitting in there!” 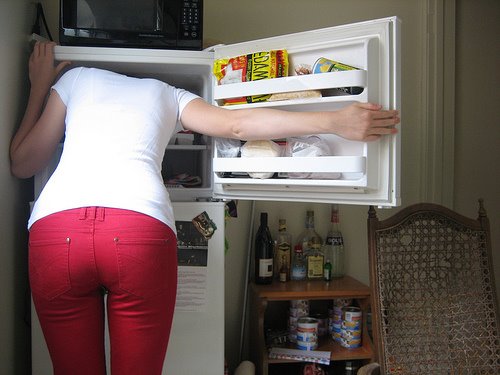 2 Replies to “Who’s Been Sitting In My Freezer?”