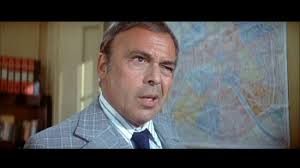 Three years ago today actor Herbert Lom passed away. Unlike his most recognisable character Chief Inspector Dreyfuss in the movie Pink Panther Strikes Again, Lom wasn’t made to evaporate by laser, he died peacefully in his sleep at the age of 95.

His portrayal as Inspector Clouseau’s long suffering boss added greatly to the humour of the Pink Panther movies. Peter Sellers rightly received kudos for his role as the bumbling officer of the law (or lauw as he pronounced it). However, one shouldn’t underestimate the comedic contribution the recurring presence of Lom, along with co-star Burt Kwouk (Cato), made to these movies.

Luckily for Lom, he didn’t have to hide in fridges in his scenes with Sellers like Kwouk as Clouseau’s manservant Cato. Kwouk became strangely addicted to this activity; so much so he used to take this home with him. The act not the fridge!

He would frighten the living daylights out of his wife with the trick. Thankfully, his addiction didn’t evolve onto hiding in freezers to get a bigger kick, or he wouldn’t have reached his current age of 85!

As an aside, many years ago I hid in the wardrobe with a plan to jump out to startle my wife. Unfortunately, as I’d been drinking, had little sleep after nightshift I fell asleep!

I woke up four hours later aching like hell and emerged from the wardrobe in quite a bit of pain. Karen, who was now in bed, get a shock when her wardrobe door opened but at least had a good laugh at my expense!

It was a ridiculous stunt to undertake but I learnt a valuable lesson from it! That lesson was, if you are ever given the choice between sleeping in a wardrobe or sleeping on a porcupine, go with the porcupine option!

Herbet Lom was born Herbert Charles Angelo Kuchačevič ze Schluderpacheru, in Prague in 1917. He gained recognition as the only actor whose birthname name is worth 1000 points at Scrabble. He changed his name to Lom as, being dyslexic, he found his real name too difficult to spell.

Although saying that, his dyslexia meant he often signed surname as Mol in his autograph!

I’m a big fan of old Ealing comedies, one of which (Ladykillers) starred Lom and, coincidentally Peter Sellers. These movies, predominantly made in the 1950’s, were old school British comedies before they evolved into double entendre laden Carry On movies in the 1960’s. 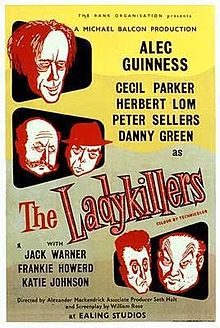 The original Ladykillers (1955), a black comedy where a frail old women inadvertently becomes the benefactor of loot stolen by a hapless gang, that included Alec Guinness, Sellers, Lom, Cecil Parker and Danny Green.

I still enjoy watching the movie now, which I have as part of a DVD boxset named ‘1950’s Films That Aren’t Shit!’ I enjoy it for its characters, its humourous not to mention improbable screenplay and the fact Cecil Parker is the double of my late maternal grandfather.

Lom plays the heartless murderous gangster Louis Harvey in the movie. His fractious relationship with other gang members leads to his ultimate downfall, when Guinness’ character dislodges a ladder on a railway bridge, causing him to fall into a moving railway wagon.

The movie won 2 BAFTA’s (Best Leading Actress and Best British Screenplay) an Academy Award nomination for its writer William Rose and Lom the coverted ‘Actor With a Face Like Bulldog Licking Piss of a Nettle’ award. 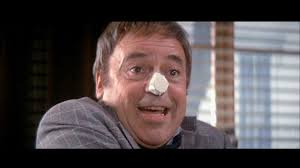 On this day in 2012 we lost a man whose smile free mush adorned some of the nations much loved comedy movies of the 20th century. On this day in 2013 I lost my contact lens. The 27th September seems a bad day for losing stuff!