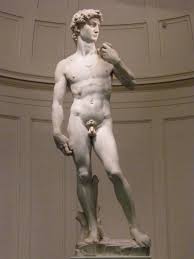 Today is the anniversary of the unveiling of Michelangelo’s David at the Piazza della Signoria in Florence. History records the sculptor created his masterpiece between 1501- 1504.

You’d have to a cold hearted cynic not to be impressed that the exquisite marble sculpture was created in just three minutes! What makes it even more amazing was those minutes, between 1501 – 1504, included a coffee break!

If you don’t use the 24 hour clock you’ll be very confused with that gag! If it’s any consolation, I am at this point of the narrative!……… Bear with me though!

The statue was commissioned as part of a series of twelve large Old Testament sculptures for the buttresses of Florence cathedral. This project started in 1410 when Donatello created a sculpture of Joshua in terracotta.

Donatello and Michelangelo received widespread critical acclaim for their flawless work. Even the harshest of Teenage Mutant Ninja Turtles critics gave kudos to the two artists for their sculpting brilliance! 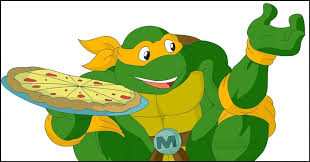 When David was unveiled 511 years ago today it wasn’t all positive comments. A few of the critics made comment about the small genitals on the statue. Michelangelo took the comments, like his tequilas, with a pinch of salt.

The sculptors publicist Nigel took a break from networking with chianti quaffing gentry to explain the original penis was significantly larger. However, a slip of the hand from Michelangelo meant it had to be adapted accordingly.

The original penis has had various uses over the years. These include a draught excluder, Joe Di Maggio’s baseball bat and its current use as Sophia Loren’s selfie stick.

Michaelangelo was not the first to get the commission to sculpt David. Originally, a Florentian named Guesto was given this accolade. However, three weeks into the project he came clean and pointed out that he was really a butcher and was dismissed immediately.

The guild were left red faced at their lazy research for a suitable sculptor. However, they now understood why Guesto’s David resembled a badly made salami!

Sculptors Agostino and Antonio Rossellino were also given the commission. However, Agostino stopped his involvement around the time of the death of Donatello. Rossellino’s contract was terminated after it was discovered the block of marble had remained neglected for 25 years.

After he was fired the contract was given to Michelangelo in August 1501. Rossellino went on to become a politician where his work ethic was far more appreciated.

It is one of many critically acclaimed works of art from the Florence Renaissance period, which also included pieces from Leonardo Di Vinci and Raphael. Some critics say the era, despite being responsible for works of  unquestionable genius, are a tad indulgent and ostentatious.

As I said to my builder, who is building a castle keep extension on my home, I can’t stand ostentatious. That being said I utterly admire the skill, vision, creativity and the genius of the artists of that time.

How would David look if commissioned in these contemporary times of global mega brands? I sadly suspect something like this!! 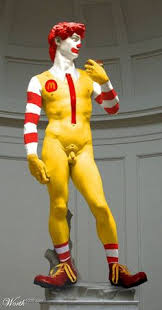