Yesterday I was talking to an elderly acquaintance, who appraised me as to how well his golf was progressing. It was heartening to hear he is making big strides and his game is improving markedly. He deserves it for the significant amount of practise he undertakes.

I want to keep this old man’s anonymity so, for the purposes of this blog, will give him the false name of Mrs Crabtree. By the way that’s not a typo, it’s supposed to be Mrs not Mr. I thought I’d clarify that as it confused my Mrs!

He’s a Scottish guy who took up golf late in life, after a visit to a fortune teller who said she saw him winning The Masters at Augusta in 2017. When he pointed out to the fortune teller he’d never played golf before she responded “Well, it’s an even bigger achievement then!”

I have to point out Mrs Crabtree isn’t the brightest of blokes. On his first round of golf, when he was first introducing to a golf bag his reaction was “Bloody hell, I’ve never seen bagpipes as big as that!” 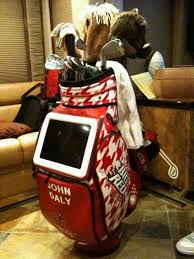 As he then tried blowing into his putter, whilst simultaneously squeezing the bag, his fellow golfers looked on in disbelief! Well, that was until he bizarrely got a tune out of it. It wasn’t the most accomplished version of ‘Oh Flower of Scotland’ they’d heard but they gave kudos to the old guy for the achievement nevertheless.

As would be expected, his first game wasn’t a great success. Not only was he taking a run up for each shot, but Mrs Crabtree was hacking up large parts of the fairway in a tantrum trying to strike the ball. I’m told his round was similar to that Spalding Smails in the movie Caddyshack!

A shot from Mrs Crabtree’s first round 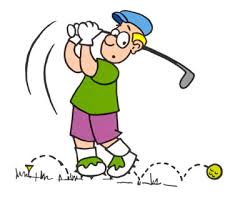 His long suffering partners eventually got him around unscathed for a creditable score of 213. Unfortunately, the course hadn’t survived unscathed, which resulted in more time replacing divots than playing the actual game.

As the walked towards the 19th hole his partners patted Mrs Crabtree on the back, told him “Well Done!” and asked for the address of the fortune teller, to ensure they never accidentally use her!

I wish I had chosen a different nome d’plume than Mrs Crabtree, I don’t know about you but I’m confusing myself!

Anyway, after spending hours practising his swing at the driving range he improved his game markedly. To such an extent that it is predicted he will soon be donning that much sought after green jacket! ………… He starts a part-time job in Homebase next week! 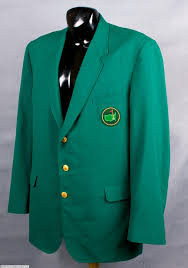 One thing that lets Mrs Crabtree down is his terrible route planning when attempting to locate courses he’s not played.

A few weeks back he had to stop and ask directions to Newton Aycliffe Golf Club from a petrol station assistant. The affable young man slowly and concisely told the old man the directions.

He then drove several miles thinking he was following the young lads directions, until realising he was still lost. So he stopped at a petrol station to ask again how to get to Newton Aycliffe Golf Club.

To his surprise and embarrassment it was the same bloody petrol station and he was asking the same young lad for route planning instructions!

On hearing of this debacle, his family bought him a Sat Nav to overcome his directional blindness. Unfortunately, though, this hasn’t helped as he can’t find the Sat Nav!

The moral of this story is ‘You can lead a horse to water. But Newton Aycliffe Golf Club isn’t that easy to find!’ ………… Oh and never give up on your dreams! Apart from the one involving the blonde from number 92, as you’ve got no chance!