Former US swimmer Mark Spitz made history on this day in 1972, when he became the first person to win seven gold medals in a single Olympiad, in Munich. 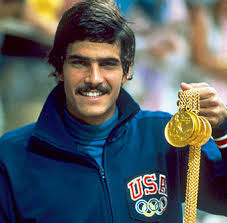 To add further kudos to his feat, not only did he win the gold medals but he also set a new world record in each of the events. This was one heck of an achievement, especially when you take into account that in each race he was fighting debilitating moustache drag!

He attempted to win an eighth, when he entered the most hirsute swimmer event but lost out to an East German women called Helga, by some distance. 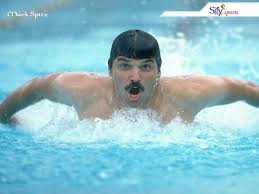 I recall, as a nine year old boy, watching Spitz’s incredible achievement. It was around the time I learnt to swim and he became the benchmark I aspired to.

Around twelve years later, during the Los Angeles Olympics, my hard work paid off and I replicated Spitz achievement. I didn’t win any medals but I grew an as equally impressive tash!

I never broke any records at swimming, although I did break several ornaments with my brother Ian, whilst playing football in the front room of our parent’s house.

However, unlike Spitz, our presentation ceremony, administered by our mum, didn’t take place on podiums. It involved a smacked arse each and a ban from using the word pleurisy for a week! ……… The punishments could be brutal in our house!

As I mentioned above, I can recall watching Spitz winning his medals back in 1972 on our black and white TV. I loved all sports in those days and was glued watching it sat on the floor, just a few feet from the telly.

To clarify, when I say glued, I mean my attention span to the TV. Not that I’d been glued to the carpet as some weird punishment! Saying that, though, I’ve never heard of anyone being punished by being glued to a carpet so I probably didn’t need to explain that!

I recall this time in Chez Strachan with great fondness. My dad had just been made a manager at work. Also, my parents had just told my brother Ian and I that we were to have a baby brother or sister early in 1973. In addition to this Leeds United had just won the FA Cup.

My dads promotion meant we could now afford pockets in our trousers and more food on the table. It was served up on the table as we still couldn’t afford plates!

I can still recall mum and dad telling us their exciting news about my mum being pregnant. For some reason they told us in the back garden. I’ve no idea why, although it was probably to stop us playing with our ball inside!

We were both excited at the news of a forthcoming sibling. Although our Ian told me, after mum and dad had gone back in the house, that he’d rather have had a Subbuteo team!

They were equally impressed. My dad responded “Have you seen my brown shoes Marg? I’m nipping off for a pint at the Jolly Miller.” My mum shook her head and said “You’re like my arse! Look under the stairs!”

She then turned to me to reply, “Yes it is Gary! …… Right, who the bloody hell has broken my china flower ornament?”…. At this, I caught sight of our Ian hastily leaving the room with his football under his arm!

The incredibly creative headline writers had a field day with Spitz’s achievements. The newspapers of the time exclaimed “Mark in Seventh Heaven!”, “Spitz Leaves His Mark!”, “Magnificent Seven for Spitz!” and “Let Someone Else Win You Tashy Yank Show Off!”

Spitz’s record stood for thirty six years until it was surpassed in 2008, when Michael Phelps recorded eight golds in Beijing. It was alleged Spitz wasn’t enamoured at Phelps beating his record. However, he gained solace from the fact he still held the record for number of golds won by an athlete sporting a moustache!

Spitz retired at the conclusion of the Munich Olympics at age of 22. He made a brief comeback in 1992 at the age of 41,when he was offered £1 million to try qualify for the US swimming team for the Barcelona Olympics.

Despite Spitz agreeing to the comeback, his moustache refused after a disagreement about its cut of the million. Spitz failed to get the required qualifying time to get a place on the plane to Barcelona, despite beating some his times in Munich.

He went back into retirement after failing to qualify, married the beautiful princess and they all lived happy ever after! Apart from his tash, which fell upon hard times and was last seen begging in Sacramento!