I displayed unusual restraint this morning when I forewent a McDonalds breakfast. I was proud of myself for not acting upon the terrible craving I had, when I woke, for a double sausage and egg McMuffin.

I’m no sure why I didn’t act upon it! It could have been the aroma of bread toasting emanating from the kitchen luring me? It certainly teased me with its subliminal message of “Come on Gary! I’m sure you’d rather have me smothered in Marmite for your brekkie!”, as it tempted me away from a less healthy first meal of the day?

Whatever it was it worked, as I fought the craving and went with the tea and toast option. I’m sure I heard my arteries give a huge sigh of relief and I got a message in my head of “Well done Gary! Now go and get showered you smelly get!”

Thinking about it, the message “Come on Gary! I’m sure you’d rather have me smothered in Marmite for your brekkie!”, may also have cured the other craving I woke with as the clock struck 7am! ……… Anyway, I’ll move on swiftly!

I’m a lapsed Christian who doesn’t attend church anymore, but I felt good that I showed the self-restraint advocated by Matthew in the bible of “…. And lead us not into temptation and deliver us from evil….”

He obviously wasn’t talking about McDonalds’ breakfasts when he conveyed that. I mean, that would be a ludicrous interpretation of Matthews words! ……… Anyway, they didn’t do breakfasts in those days, only lunchtimes and evenings!

They aren’t evil either! Apart from the employee in Basingstoke who invaded Poland in 1939! ………. Although, I might be getting him mixed up with Hitler, best scratch that!

I’m shattered today! The uncertainty surrounding many aspects of my life mean my sleep pattern is suffering very badly. I’m also losing my appetite slightly. For example, I’m currently only having two bags of wine gums a day instead of the usual three!

I know nutritionists, doctors and personal trainers would not advocate two bags of wine gums a day as part of a balanced diet. However, I’m cutting down on my sausage and egg McMuffin intake, so give me a break!

On this day in 1997, Princess Diana died following a car crash in Paris. I recall the day vividly. It was early on a bright Sunday morning when Karen and I were woken by our son Jonny, who was seven at the time.

He opened the door and exclaimed “Mum! Dad! Princess Diana has been killed in a car crash! My wife Karen, who was a big fan of the princess, angrily retorted “Don’t say things like that! I’ll cut your head off for telling lies!”

It might sound an extreme punishment, but you have to take into account she was brought up in a puritanical, masonic household where happiness and laughter were frowned upon!

Despite Jonny’s protestations to the contrary, we didn’t believe his story so he wandered off back downstairs to hide his mum’s guillotine! We followed him downstairs shortly afterwards, to find out the terrible story he had told us earlier was true!

Karen’s guillotine. We later converted it into a multi-gym 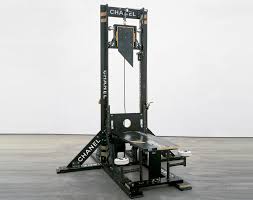 We never apologised to Jonny for accusing him of lying. To be honest, we didn’t have a chance as he was on the phone to Childline. He explained he was frightened and that his mum was going to chop his head off! He got taken into care a few hours later.

That isn’t true he wasn’t taken into care. Karen was arrested and as a consequence spent four long weeks having to undertake two hundred hours community service. It was tough going for my diminutive spouse, as it turned out the punishment included one hundred hours of being interviewed by Piers Morgan!

So if you are reading this Jonny, we apologise for not believing you eighteen years ago! However, in our defence your ‘boy that cried wolf’ antics prior to this led to our scepticism, when you told your mum and I about Diana’s death!

As I write, the rain is torrential outside. Is it a representation of the tears that flowed worldwide in the weeks after Diana’s death? A romantic may look at it as a metaphorical tribute to a much loved princess, who lost her life eighteen years ago. 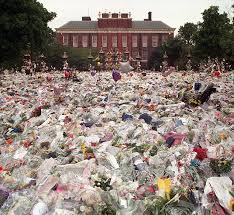 As much as I liked Diana, watching all the water splashing on my patio table just makes me desperately go to the toilet to pee! ….. On that note I’m off!