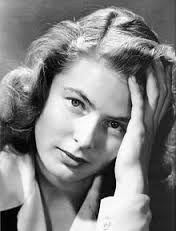 Yesterday’s date (29th August) held particular significance for actress Ingrid Bergman. Not only was it her birthday but it was also the date she passed away after a long fight with breast cancer, aged 67.

I’m saying unwanted, however, that is an assumption! I don’t think any day is a wanted day to pass away, never mind your birthday. However, I suppose excitedly opening the door expecting a postman laden with cards and presents, only to be met by the grim reaper isn’t the way you’d choose to celebrate!

When the faceless person dressed in black carrying a scythe knocked on her door, it disorientated Mrs Shoebridge. She’d not heard of the grim reaper and mistaking the scythe as a birthday present, she snatched it, said “Thanks!” and shut the door in his face.

The startled reaper stood a while at the door, before shrugged his shoulders, muttering “That’s knackered my plans to harvest my wheat field this after!” and slowly walking down Ackroyd Street towards Murphy’s Chip Shop.

Mrs Shoebridge tragically passed away with a head injury later that afternoon. This was sustained when she tripped over the scythe which she had carelessly left on the living room floor. She had been venturing across the room for the TV remote so she could record Coronation Street.

She was found by neighbour Elsie Graham as she passed in and out of consciousness shortly before her demise. Her last words to Elsie were “Watch you don’t trip over that bloody scythe!”

The old woman was buried five days later. It was attended by a sparse crowd of friends, family and a man who wanted to buy the scythe. Her eulogy was read by her friend Elsie. who was very emotional throughout. Not only at the passing of her good friend but Mrs Shoebridge owed her £20!

Her headstone was adorned with the words ‘Oh Damn, I forgot to record Coronation Street!’

Writing the joke wording for the tombstone above set me thinking about the afterlife. Does it exist? Do you get re-incarnated? And do you get to watch Coronation Street, or are you in suspense for eternity as to who stole Roy Cropper’s shopping bag?!

I’ve just spent a few months watching the majority of the five seasons of US drama Breaking Bad. I have four left to watch. I’d be gutted if I didn’t get to see the remained if I was to be taken now. Especially if the guvnor of where I end up doesn’t subscribe to Netflix; I might never find out how it ended! 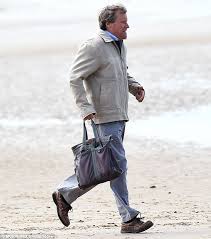 Anyway, back to Ingrid Bergman.

To be honest I’ve only seen her in a few movies, Casablanca along with two Hitchcock movies Sleepless and Notorious. With that in mind, I’m not going to write a critique about the Swede or her movies. Although, the three I saw were synonymous with celluloid majesty.

If you thought that last sentence was pompous, pretentious and unnecessarily self-indulgent, it was meant to be. Waxing lyrical was my  literally distraction for not having any worthwhile content to write about Bergman’s movies

I haven’t seen any of the Swedish born actress’ movies for which she won her three Academy Awards, so I asked a big movie buff what those movies (Gaslight, Anastasia and Murder On The Orient Express) were like. I chose him as he is a respected blogger about movies and has a wealth of knowledge on the subject. He stood and pondered for a second before responding “They’re alright I suppose!”

With this thorough critique of the three Oscar winning movies, I felt I had no need to watch them as I felt I knew the plots inside and out!

Anyway, with the knowledge void I have surrounding Ingrid Bergman movies I will now bring this blog to a close!

Ingrid Bergman with Humphrey Bogart in Casablanca. She didn’t win an Oscar in this movie, although she consoled herself with the fact at least she wasn’t called Humphrey! 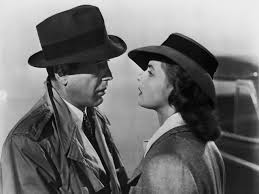